The Vat-vriksha, Bargad or Banyan tree is central to South Asian spirituality and is the national tree of India.  It is associated with Yama, the God of death, so is often planted near crematoria.  Because of its ability to re-sprout it has great longevity and is a symbol of immortality.  It was also by a Banyan tree that Savitri bargained with Yama for the return of her dead husband and King Satyavan so that she could get a son – remembered in the annual celebration of Vat Purnima and Vat Savitri.

A similar account is found in the Old Testament of the Bible.  There is a dead tree … coming to life … representing a new son from a dead line of kings.  The major difference is that this account is a future-looking prophecy and was developed by different prophets (rishi) over hundreds of years.  This composite story was predicting someone coming.  The man who first told this story was Isaiah (750 BCE) which later Old Testament rishi-prophets further developed – in the Branch from the dead tree.

Isaiah and the Branch

Isaiah lived in historically verifiable time, seen in the timeline below.  This timeline is taken from the history of the Jews. 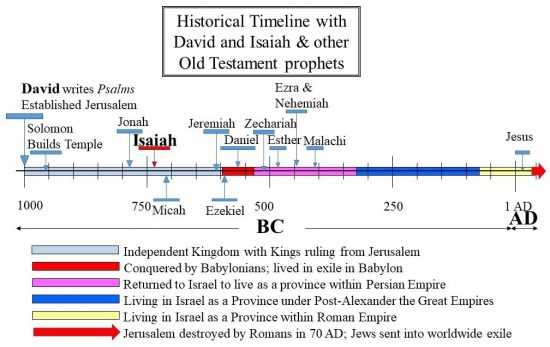 Isaiah shown in historical timeline. He lived in the period of the Davidic Kings of Israel

You can see that Isaiah’s book was written in the period of David’s Royal dynasty (1000 – 600 BCE) ruling from Jerusalem. In Isaiah’s time (750 BCE) the dynasty and the Jewish kingdom was corrupt. Isaiah pleaded for the kings to return back to God and to the good practice and spirit of Moses’ Ten Commandments. But Isaiah knew that Israel would not repent, and so he foresaw that the Kingdom would be destroyed and the kings cease to rule.

He used an image for the royal dynasty, picturing it like a great banyan tree. This tree had at its root Jesse, the father of King David. On Jesse the dynasty of kings was started with David, and continued with his successor, King Solomon, and so on.  As illustrated in the image below, the tree continued to grow and develop as the next son in the dynasty ruled. 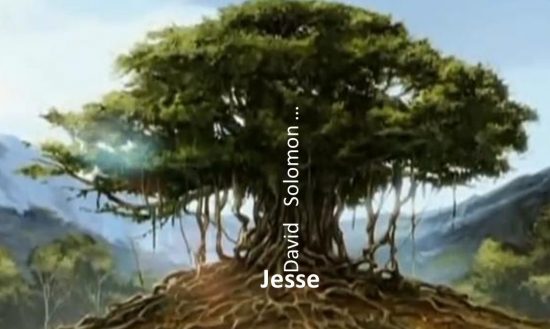 First a Tree … then a Stump … then a Branch

Isaiah warned that this ‘tree’ dynasty would soon be cut down, reducing it to a dead stump. Here is how he began this tree image which then he turned into a riddle of a stump and Branch:

“A shoot will come up from the stump of Jesse; from his roots a Branch will bear fruit. The Spirit of the LORD will rest on him–the Spirit of wisdom and understanding, the Spirit of counsel and of power, the Spirit of knowledge.” (Isaiah 11:1-2) 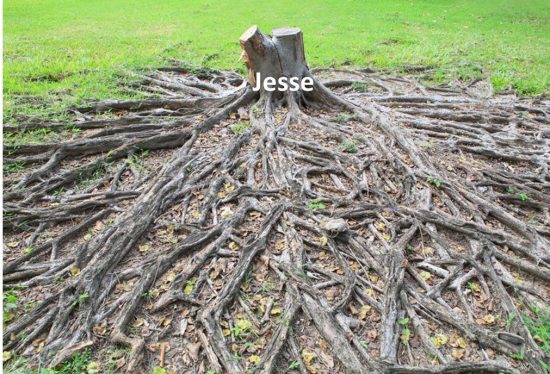 Isaiah warned the Dynasty would one day become a dead stump

The cutting down of this ‘tree’ happened 150 years after Isaiah, around 600 BCE, when the Babylonians conquered Jerusalem, dragging its people and king into exile in Babylon (the red period in the timeline above). This started the exile of the Jews – some of whom migrated to India. Jesse was the father of King David, and so was the root of David’s Dynasty. The ‘stump of Jesse’ was therefore a metaphor of this shattering of David’s dynasty.  In the story of Savitri and Satyavan there was one dead king’s son – Satyavan.  In the prophecy of the stump the whole line of kings would come to an end and the dynasty itself would die.

The Branch: A coming ‘him’ from David possessing wisdom 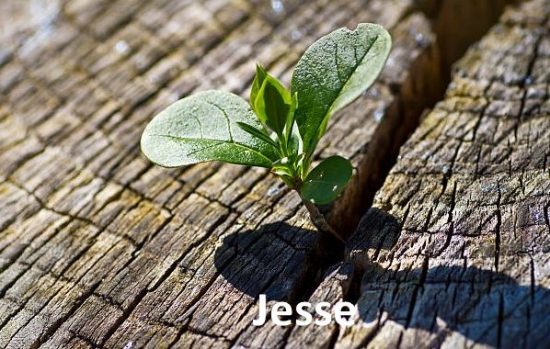 Shoot from the dead stump of Jesse

But the prophecy looked further into the future than just the cutting down of the kings in using an image associated with the banyan tree.  When banyan seeds begin life they often do so on the stumps of other trees.  The stump is a host to the germinating banyan tree.  But once the banyan seedling is established it will outgrow and outlive the stump host.  This shoot foreseen by Isaiah would be like a banyan tree as a new shoot would go up from its roots – to form a Branch.  Isaiah used this imagery and prophesied that one day in the far future a shoot, known as the Branch, would emerge from the dead stump, just like banyan shoots sprout from tree stumps. This Branch is referred to as a ‘him’ so Isaiah is talking about a specific man, coming from the line of David after the dynasty would be cut down. This man would have such qualities of wisdom, power, and knowledge it would be as if the very Spirit of God would be resting on him. 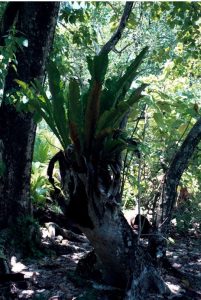 A banyan tree outgrowing its host stump. Soon it will be a tangle of propagating roots and shoots.

The banyan tree in mythology is mentioned in many scriptures as symbolic of immortality. Its aerial roots grow down into the soil forming additional trunks. It symbolizes longevity and thus represents the divine creator.  This Branch foreseen by Isaiah in 750 BCE would have many similar divine characteristics, and last long after the dynasty ‘stump’ disappeared.

Jeremiah and the Branch

The rishi-prophet Isaiah erected a signpost so people could understand unfolding future events. But his was only the first of several signs. Jeremiah, living about 150 years after Isaiah, in 600 BCE when David’s dynasty was being cut down right before his very eyes, wrote:

“The days are coming,” declares the LORD, “when I will raise up to David a righteous Branch, a King who will reign wisely and do what is just and right in the land. In his days Judah will be saved and Israel will live in safety. This is the name by which he will be called: The LORD our Righteousness“. (Jeremiah 23:5-6)

Jeremiah expanded on Isaiah’s Branch image of David’s dynasty. The Branch will also be a King. But not a King like the previous kings of David who had been reduced to a dead stump.

The Branch: The LORD our Righteousness

The difference with this Branch is seen in his name.  He would bear the very name of God (‘The LORD’ – The Jewish name for God), so like a banyan tree this Branch would be an image of the Divine.  He will also be ‘our’ (us humans) Righteousness.

When Savitri disputed with Yama over the body of her husband, Satyavan, it was her righteousness that gave her the power to face death (Yam).  But, as noted about the Kumbh Mela, our problem is our corruption or sin, and so we lack ‘righteousness’.  The Bible tells us that therefore we do not have power to face death.  In fact it says we are helpless against:

… the power of him who holds the power of death—that is, the devil—  and free those who all their lives were held in slavery by their fear of death. (Hebrews 2:14b-15)

In the Bible the devil is like Yama since he holds the power of death against us.  In fact, like Yama arguing over the body of Satyavan the Bible records another time the devil disputed over a body, when

… the archangel Michael, when he was disputing with the devil about the body of Moses, did not himself dare to condemn him for slander but said, “The Lord rebuke you!” (Jude 1:9)

So, since the devil has power, like Yama in the story of Savitri and Satyavan, to dispute over the body of a noble prophet like Moses, then he certainly has power over us in death – because of our sin and corruption.  Even the angels recognize that only the Lord – the Creator God – has the authority to rebuke the devil in death.  And here, in the ‘Branch’ is a promise that in the future the LORD would impart ‘righteousness’ to us so we can have victory over death.  But how?  Zechariah fills in further details as he develops this theme, predicting even the name of the coming Branch with details that parallels the story of Savitri and Satyavan defying death (Yama) – which we look at next.