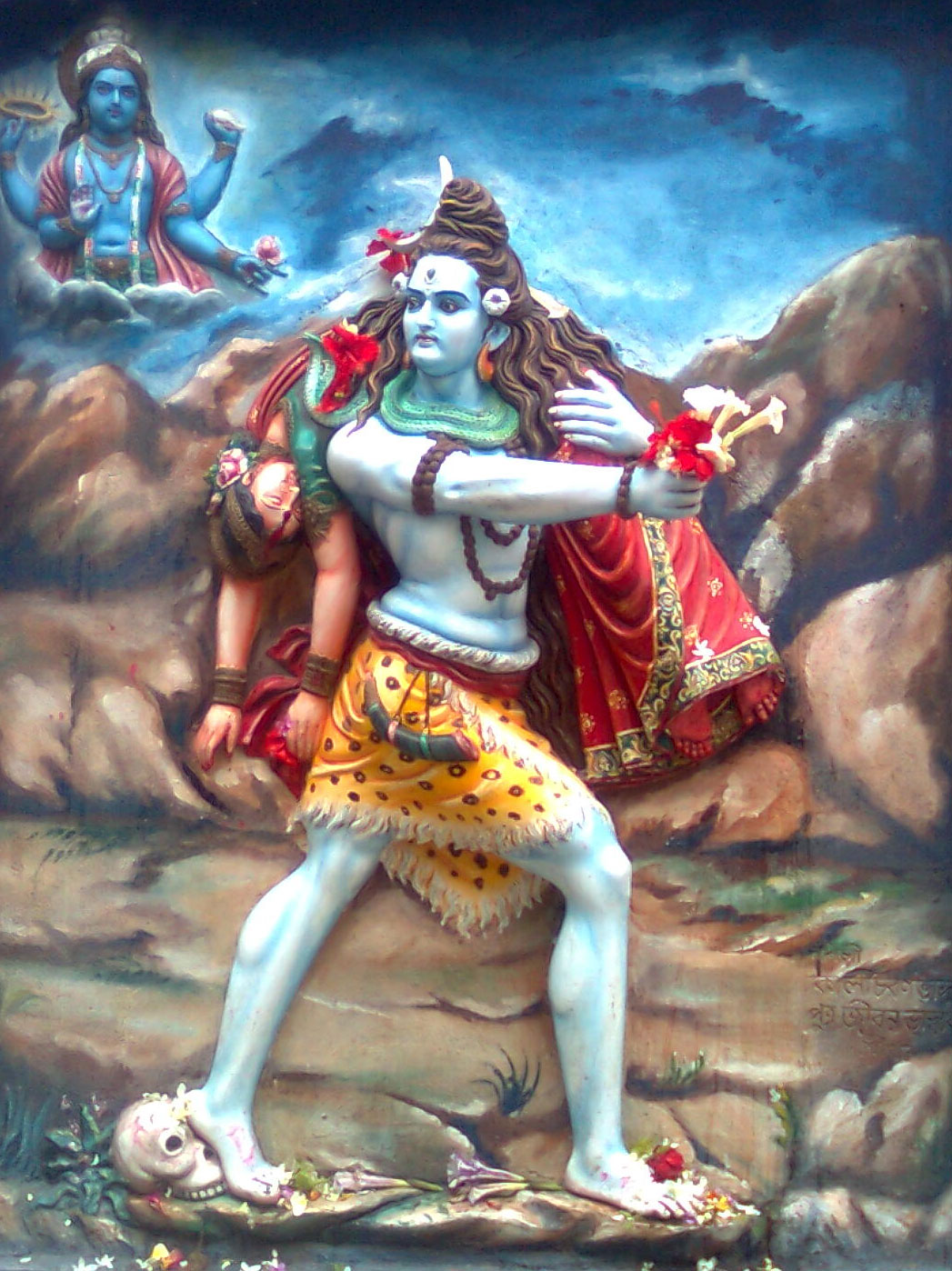 Various writings recount the story of Daksa Yagna but the gist of it is that Shiva had married Daksayana/Sati, an incarnation of Adi ParaShakthi, considered pure primal energy by Shakti devotees. (Adi Parashakthi is also known as Parama Shakti, Adi Shakti, Mahashakti , Mahadevi, Mahagauri, Mahakali, or Satyam Shakti).

Daksayana’s father, Daksha, disapproved of her marriage to Shiva because of Shiva’s excessive asceticism.  So when Daksha performed a yajna ritual he invited the entire family except his daughter Sati and Shiva.  But Sati, hearing of the yajna ceremony, went anyways.  Her father became angry that she attended and continually yelled at her to leave.  This in turn angered Sati so that she reverted to her Adi Parashakthi form and immolated her mortal body form Sati on the yajna fire such that it collapsed to the floor in scorching flames.

The immolation of Sati struck Shiva with grief.  He had lost his beloved Sati. So Shiva rendered a terrible “Tandava”, or dance of destruction, and the more Shiva danced, the more destruction ensued.  His Tandava caused widespread destruction and death over the following days.  Out of grief and anger from his loss, Shiva carried Sati’s body and roamed around the universe with it. Vishnu had the body cut into 51 body parts which fell onto Earth to become holy spots to Shakti Peeths.  These 51 holy places today commemorate, as various Shakti Temples, the loss that Shiva experienced in losing Sati.

In Daksa Yagna we appreciate the loss that devas and devis experience when they lose each other to death.  But we all go through loss of a loved one to death.  What do you do when you lose someone you love?  Do you give up in despair? Lash out in anger? Try to get them back?

What about God?  Does he care or even notice when one of us is lost to His Kingdom?

Jesus teaches through lens of ‘loss’

Jesus told several parables to show us how God feels and what He does so He will not lose even one of us.

To feel the force of his teachings we must remember that holy people will often stay apart from those who are not so that they do not become unclean. They were seen as lost to impurity. This was true of the teachers of Dharma law in the time of Jesus. But Jesus had taught that our purity and cleanliness is foremost a matter of our hearts, and actively sought to be with those who were not ritually clean. Here is how the Gospel records both his association with those unclean and the reaction of the religious teachers.

Tax collectors and other notorious sinners often came to listen to Jesus teach. 2 This made the Pharisees and teachers of religious law complain that he was associating with such sinful people—even eating with them!

Why would Jesus welcome and eat with sinners? Did he enjoy sin? Jesus answered his critics by telling three parables.

The Parable of the Lost Sheep

So Jesus told them this story: 4 “If a man has a hundred sheep and one of them gets lost, what will he do? Won’t he leave the ninety-nine others in the wilderness and go to search for the one that is lost until he finds it? 5 And when he has found it, he will joyfully carry it home on his shoulders. 6 When he arrives, he will call together his friends and neighbors, saying, ‘Rejoice with me because I have found my lost sheep.’ 7 In the same way, there is more joy in heaven over one lost sinner who repents and returns to God than over ninety-nine others who are righteous and haven’t strayed away!

In this story Jesus likens us to sheep with him as the shepherd.  Like any shepherd going to search for his lost sheep, he himself is out searching to find lost people. Perhaps you have been caught in some sin – even a secret one that no one in your family knows. Or perhaps your life, with all its problems, is so confusing that it is leaving you feeling lost. This story gives hope because you can know that Jesus is seeking you to help you. He wants to rescue you before harm destroys you.  He does so because he feels the loss when you are lost.

Then he told a second story.

The Parable of the Lost Coin

“Or suppose a woman has ten silver coins and loses one. Won’t she light a lamp and sweep the entire house and search carefully until she finds it? 9 And when she finds it, she will call in her friends and neighbors and say, ‘Rejoice with me because I have found my lost coin.’ 10 In the same way, there is joy in the presence of God’s angels when even one sinner repents.”

In this story we are the valuable but lost coin and he is the one searching for the coin. Though the coin is lost somewhere in the house, it itself does not ‘know’ that it is lost. It does not feel the loss.  It is the woman who feels the sense of loss and therefore she sweeps the house very carefully looking under and behind everything, not satisfied until she finds that valuable coin. Perhaps you do not ‘feel’ lost. But the truth is that we all need to repent, and if you have not, then you are lost, whether you feel it or not. In Jesus’ eyes you are the valuable but lost coin and he feels the loss so searches and works to make repentance clear to you.

His third story is the most well-known.

The Parable of the Lost Son

11 To illustrate the point further, Jesus told them this story: “A man had two sons. 12 The younger son told his father, ‘I want my share of your estate now before you die.’ So his father agreed to divide his wealth between his sons.

13 “A few days later this younger son packed all his belongings and moved to a distant land, and there he wasted all his money in wild living. 14 About the time his money ran out, a great famine swept over the land, and he began to starve. 15 He persuaded a local farmer to hire him, and the man sent him into his fields to feed the pigs. 16 The young man became so hungry that even the pods he was feeding the pigs looked good to him. But no one gave him anything.

17 “When he finally came to his senses, he said to himself, ‘At home even the hired servants have food enough to spare, and here I am dying of hunger! 18 I will go home to my father and say, “Father, I have sinned against both heaven and you, 19 and I am no longer worthy of being called your son. Please take me on as a hired servant.”’

20 “So he returned home to his father. And while he was still a long way off, his father saw him coming. Filled with love and compassion, he ran to his son, embraced him, and kissed him. 21 His son said to him, ‘Father, I have sinned against both heaven and you, and I am no longer worthy of being called your son.[b]’

22 “But his father said to the servants, ‘Quick! Bring the finest robe in the house and put it on him. Get a ring for his finger and sandals for his feet. 23 And kill the calf we have been fattening. We must celebrate with a feast, 24 for this son of mine was dead and has now returned to life. He was lost, but now he is found.’ So the party began.

25 “Meanwhile, the older son was in the fields working. When he returned home, he heard music and dancing in the house, 26 and he asked one of the servants what was going on. 27 ‘Your brother is back,’ he was told, ‘and your father has killed the fattened calf. We are celebrating because of his safe return.’

28 “The older brother was angry and wouldn’t go in. His father came out and begged him, 29 but he replied, ‘All these years I’ve slaved for you and never once refused to do a single thing you told me to. And in all that time you never gave me even one young goat for a feast with my friends. 30 Yet when this son of yours comes back after squandering your money on prostitutes, you celebrate by killing the fattened calf!’

31 “His father said to him, ‘Look, dear son, you have always stayed by me, and everything I have is yours. 32 We had to celebrate this happy day. For your brother was dead and has come back to life! He was lost, but now he is found!’”

In this story we are either the older, religious son, or the younger son who goes far off. Though the older son observed all the religious pujas he never understood the loving heart of his father. The younger son thought he was gaining freedom by leaving home but found himself enslaved in starvation and humiliation.   Then he ‘came to his senses’ and realized he could go back to his home. Going back would reveal that he was wrong to leave in the first place, and to admit this would require humility. This illustrates what ‘repent’, which Swami John taught so boldly, really means.

When he swallowed his pride and returned to his father he found the love and acceptance to be so much more than he could have hoped for. The sandals, the robe, the ring, the feast, the blessing, the acceptance – all these speak of welcoming love. This helps us understand that God loves us that much, wanting us to return to him. It requires that we ‘repent’ but when we do we will find Him ready to receive us.

In Daksa Yagna we see that even such shakti power as Adi Parashakthi and Shiva could not overcome their separation by death.  Sita’s 51 shakti body parts falling to earth testify to this fact even to our day.  This is the ultimate ‘lost’.  It is this kind of ‘lost’ that Jesus came to rescue us from.  We see this as he faces that ultimate enemy – death itself.