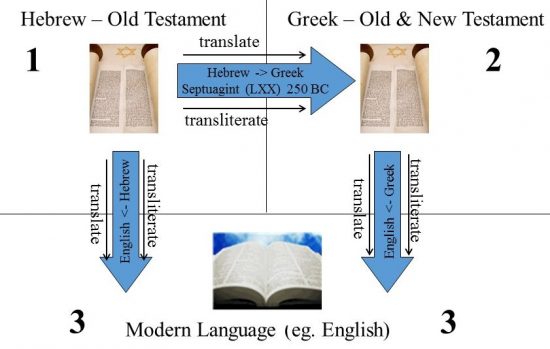 I sometimes ask people what Jesus’ last name was. Usually they reply,

“I guess his last name was ‘Christ’ but I am not sure”.

“So when Jesus was a boy did Joseph Christ and Mary Christ take little Jesus Christ to the market?”

Put that way, they realize that ‘Christ’ is not Jesus’ family name. So, what is ‘Christ’? Where does it come from? What does it mean?  Surprising to many, ‘Christ’ is a title that means ‘ruler’ or ‘rule’.  It is not unlike the title ‘Raj’, as in the British Raj that ruled India before independence.

We should first understand some translation basics. Translators sometimes choose to translate by similar sound rather than by meaning, especially names and titles. This is known as transliteration.  For example, “Kumbh Mela” is an English transliteration from the Hindi कुंभ मेला.  Though मेला means ‘fair’ or ‘festival’ it is brought into English by similar sound to Kumbh Mela rather than Kumbh Fair.  “Raj” is an English transliteration from Hindi “राज”.  Though राज means ‘rule’ it was brought into English by sound to “British Raj” rather than “British Rule”.  With the Veda Pusthakan (Bible), translators had to decide which names and titles to translate (by meaning) and which to transliterate (by sound).  There is no specific rule.

Translation & Transliteration in the Septuagint

The original Hebrew Old Testament (written from 1500 – 400 BC) is shown in quadrant #1. Because the Septuagint was a 250 BC Hebrew –> Greek translation it is shown as an arrow going from quadrant #1 to #2.  The New Testament was written in Greek (50–90 AD), so #2 contains both Old and New Testaments. In the bottom half (#3) is a modern language translation of the Bible.  The Old Testament (Hebrew Vedas) is translated from the original Hebrew (1 -> 3) and the New Testament is translated from the Greek (2 -> 3). The translators must decide on names and titles as explained previously. This is shown with the blue arrows labeled transliterate and translate, showing translators can take either approach.

The Origin of ‘Christ’

Now follow the process above, focusing on the word ‘Christ’.

In the Hebrew Old Testament the title is ‘מָשִׁיחַ’ (mashiyach) which means an ‘anointed or consecrated person’ such as a king or ruler.  Hebrew kings of that period were anointed (ceremonially rubbed with oil) before they became king, thus they were anointed ones or mashiyach.  Then they became rulers, but their rule was to be in submission to the heavenly rule of God, according to His laws.  In that sense Hebrew kings in the Old Testament were like The Raj.  The Raj ruled the British territories of South Asia, but under submission to the government in Britain, subject to its laws.

The Old Testament prophesied the coming of a specific mashiyach (with a definite article ’the’) who would be a unique king. When the Septuagint was translated in 250 BC, the translators chose a word in the Greek with a similar meaning, Χριστός (sounds like Christos), based from chrio, which meant to rub ceremonially with oil. So the Hebrew ‘mashiyach’ was translated by meaning (not transliterated by sound) to Χριστός in the Greek Septuagint. The New Testament writers continued to use the word Christos to identify Jesus as this prophesied ‘mashiyach’.

Because we do not usually see the word ‘Christ’ in the Old Testament, its connection to the Old Testament is not always clear. But from this study we know that ‘Christ’=’Messiah’=’Anointed One’ and that it was a specific title.

The Christ anticipated in 1st Century

Now let’s make some observations from the Gospel. Below is the reaction of King Herod when the Magi came looking for the King of the Jews, a part of the Christmas story. Notice, ‘the’ precedes Christ, even though it is not referring specifically about Jesus.

When King Herod heard this he was disturbed, and all Jerusalem with him. When he had called together all the people’s chief priests and teachers of the law, he asked them where the Christ was to be born. (Matthew 2:3-4)

You see that the idea of ‘the Christ’ was well understood between Herod and his advisors – and here does not refer specifically to Jesus. This shows ‘Christ’ comes from the Old Testament, commonly read by people in the 1st century (like Herod and his advisors) from the Greek Septuagint. ‘Christ’ was (and is) a title, not a name, denoting a ruler or King. This is why Herod ‘was disturbed’ because he felt threatened at the possibility of another King.   We can dismiss the notion that ‘Christ’ was a Christian invention. The title was in use hundreds of years before there were any Christians.

The early followers of Jesus were convinced that Jesus was this coming Christ prophesied in the Hebrew Vedas, while others opposed this belief.

The answer goes to the heart of a paradox about rule based on love or power.  The Raj did have authority to rule over India under the British crown.  But it obtained the right to rule in India because the Raj first came in military power and enforced outward submission through its might. The people did not love the Raj and through leaders like Gandhi, eventually the Raj was terminated.

Jesus as Christ did not come to demand submission, even though he had the authority.  He came to establish an eternal kingdom based on love or bhakti, and this required that the paradox between power and authority on one side meet love on the other.  The Hebrew Rsis explored this paradox to help us understand the coming of the ‘Christ’.  We follow their insights from the first appearance of ‘Christ’ in the Hebrew Vedas, coming around 1000 BC from the Hebrew King David.