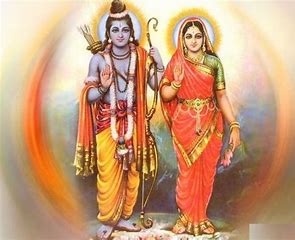 When one considers all the great epics and love stories composed, the Ramayana certainly comes to the top of the list.  There are many noble facets to this epic:

The long road to the triumph of good over evil, in ways that brings out the character of its heroes, has made the Ramayana a timeless epic.  For this reason communities perform Ramlilas every year, especially during the Vijayadashami (Dussehra, Dasara or Dashain) festival, often based on literature derived from the Ramayana, such as Ramcharitmanas.

We Can’t Be ‘In’ the Ramayana

The Ramayana’s major shortcoming is that we can only read, hear or watch the drama. Some can participate in Ramlilas, but the Ramlilas are not the real story.  Would it not be better if we could actually enter into the Ramayana world of King Dasharatha in his kingdom of Ayodhya and accompany Rama on his adventures?

The Epic We Are Invited To Enter ‘Into’

Though that is not possible, there is another epic, on the same scale as the Ramayana which we are invited to enter into.  This epic has so many similarities to the Ramayana that we can use the Ramayana as a template to understand this real-life epic.  This epic forms the ancient Hebrew Vedas, now often known as the Bible.  But this epic plays out in the world we live in, allowing us to enter into its drama.  Since it might be new to us, we can understand its story, and the role we play in it, by exploring it through the lens of the Ramayana.

Though an epic with many side-plots, the core of the Ramayana forms a love story between Rama, the hero, and Sita, its heroine.  In the same way, though the Hebrew Vedas form a large epic with many side-plots, the core of the Bible is a love story between Jesus (the hero) and people in this world who become His bride, as Sita became Rama’s bride.  As Sita had an important role to play in the Ramayana, so we also have an important part to play in the Biblical story.

But let’s start at the beginning.  The Bible states that God created man out of the earth itself, similarly to Sita coming from the earth in most Ramayana texts.  God did this because He loved man, wanting a relationship with him.  Note how God describes His love for people in the ancient Hebrew Vedas

I will plant her for myself in the land;
I will show my love to the one I called ‘Not my loved one.’

The Heroine Captive by the Villain

However, though God created mankind for this relationship, a villain destroyed the relationship.  As Ravana kidnapped Sita and imprisoned her in his kingdom of Lanka, so an adversary to God, Satan, often depicted as an asura-like serpent, brought about mankind’s captivity. The Bible describes our situation under his control in these words.

As for you, you were dead in your transgressions and sins, 2 in which you used to live when you followed the ways of this world and of the ruler of the kingdom of the air, the spirit who is now at work in those who are disobedient. 3 All of us also lived among them at one time, gratifying the cravings of our flesh  and following its desires and thoughts. Like the rest, we were by nature deserving of wrath.

The Build-up to the Coming Conflict

When Ravana captured Sita into his kingdom, Rama warned him that he would rescue her and destroy him.  In the same way, when Satan brought about our downfall into sin and death, God warned Satan, at the beginning of human history, how He would destroy him, through the Seed of The Woman – the riddle that became the center of the struggle between these opponents.

God reaffirmed the coming of this Seed in ancient times through:

The Ramayana likewise orchestrated the showdown between Ravanna and Rama through:

The Hero Comes to Rescue His Love

The Gospels reveal Jesus as that seed promised to come through the Virgin woman. Like Rama came to rescue Sita trapped by Ravana, Jesus came to earth to rescue those trapped by death and sin. Though, like Rama, he was of Divine Royalty, he willingly emptied himself of privilege and power.  The Bible describes it like this

have the same mindset as Christ Jesus:

6 Who, being in very nature God,
did not consider equality with God something to be used to his own advantage;
7 rather, he made himself nothing
by taking the very nature of a servant,
being made in human likeness.
8 And being found in appearance as a man,
he humbled himself
by becoming obedient to death—
even death on a cross!

Herein lies a major difference between the Ramayana and the Biblical epic.  In the Ramayana, Rama defeats Ravana by strength of might.  He slays him in a heroic battle.

The path to victory for Jesus was different; it led through the road of defeat.  Instead of winning a physical battle, Jesus died a physical death, as prophesied beforehand.  He did this because our captivity is to death itself, so he needed to defeat death.  He did so by rising from the dead, which we can examine historically.  By dieing for us, he literally gave himself on our behalf.  As the Bible states about Jesus

who gave himself for us to redeem us from all wickedness and to purify for himself a people that are his very own, eager to do what is good.

In the Ramayana, Rama and Sita re-united upon defeating Ravana.  In the Biblical epic, now that Jesus has defeated death, Jesus likewise extends the invitation to you and me to become his, to respond in bhakti.  Those who choose this are His Bride

Husbands, love your wives, just as Christ loved the church and gave himself up for her 26 to make her holy, cleansing her by the washing with water through the word, 27 and to present her to himself as a radiant church, without stain or wrinkle or any other blemish, but holy and blameless…

This is a profound mystery—but I am talking about Christ and the church.

In the Ramayana, Rama loved Sita because she was beautiful.  She also had a pure character.  The Biblical epic unfolds in this world, with us who are not pure. But Jesus still loves those who respond to his call, not because they are beautiful and pure, but in order to make them beautiful and pure, completed with the following character

But the fruit of the Spirit is love, joy, peace, forbearance, kindness, goodness, faithfulness, 23 gentleness and self-control. Against such things there is no law.

Though Sita and Rama re-united right after Ravana’s defeat, questions surfaced about Sita’s virtue.  Some accused her of being unchaste while under Ravana’s control.  So Sita had to undergo Agni Pariksha (fire ordeals) to prove her innocence.  In the Biblical epic, upon winning his victory over sin and death, Jesus ascended to heaven to prepare for his Love, whom He will return for.  While separated from Him, we also have to go through ordeals, or trials, which the Bible likens to fire; not to prove our innocence, but to purify ourselves from that contaminating His pure love.  The Bible uses this imagery

Praise be to the God and Father of our Lord Jesus Christ! In his great mercy he has given us new birth into a living hope through the resurrection of Jesus Christ from the dead, 4 and into an inheritance that can never perish, spoil or fade. This inheritance is kept in heaven for you, 5 who through faith are shielded by God’s power until the coming of the salvation that is ready to be revealed in the last time. 6 In all this you greatly rejoice, though now for a little while you may have had to suffer grief in all kinds of trials. 7 These have come so that the proven genuineness of your faith—of greater worth than gold, which perishes even though refined by fire—may result in praise, glory and honor when Jesus Christ is revealed. 8 Though you have not seen him, you love him; and even though you do not see him now, you believe in him and are filled with an inexpressible and glorious joy, 9 for you are receiving the end result of your faith, the salvation of your souls.

… To a Great Wedding

The Bible declares that Jesus will return again for his Love and then will make her His Bride.  So, as in all great epics, the Bible ends with a wedding.  The price that Jesus paid has paved the way for this wedding.  That wedding is not figurative but real, and those accepting His wedding invitation He calls ‘The Bride of Christ’.  As it says:

Let us rejoice and be glad
and give him glory!
For the wedding of the Lamb has come,
and his bride has made herself ready.

Those who receive Jesus’ offer of redemption become his ‘bride’.  He offers this heavenly wedding to all of us.  The Bible ends with this invitation for you and me to come to His wedding

Enter into the Epic: By Responding

The relationship between Sita and Rama in the Ramayana was used as a lens to understand the relationship offered to us in Jesus.  It is the heavenly romance of God who loves us.  He will marry as His Bride all who accept His marriage proposal.  As with any marriage proposal you have an active part to play, to accept the proposal or not.  In accepting the proposal you enter into that timeless epic which supersedes even the grandeur of the Ramayana epic.