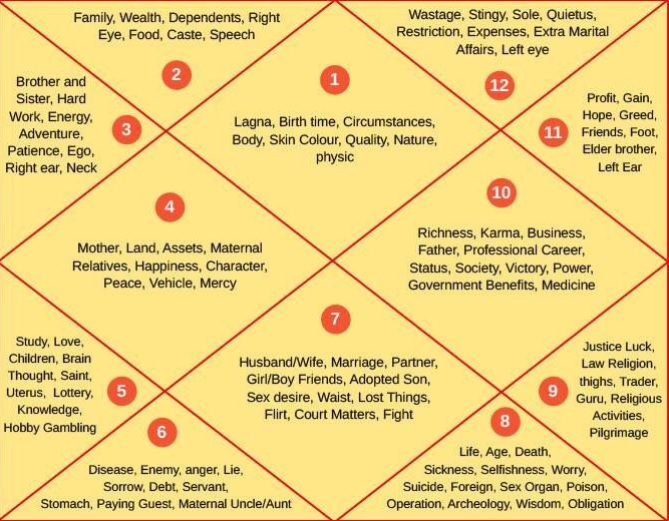 When facing important life decisions (marriage, career etc.) many people use their kundli for guidance and to avoid making bad choices.  A kundli, also known as Janam Kundli, Janampatri, Natal Chart, Birth Horoscope, or Birth Chart, is a 12-house jyotish (Vedic astrology) chart based on the exact date/time and place of one’s birth.  Vedic astrology is an ancient art, but before exploring its origins, consider how it is practiced today.

Vedic or Hindu astrology divides the earth’s 360-degree rotational circle against the background of the stars into 12 sections corresponding to the 12 Rasi or Zodiac astral signs. Thus each section occupies a 30 degree arc in the earth’s rotation. Likewise, your life is divided into 12 Houses, with each House representing an aspect of your life (eg appearance, wealth, creativity, intelligence etc.). So there is a one-to-one fit between each Zodiac Rasi and each House.

The vedic astrologer assigns the appropriate Zodiac Rasi to each of the 12 Houses. Your set of matching Zodiac Rasi with Houses is your kundli chart. The kundli requires your detailed birth data because the astrologer can calculate which of the 12 Zodiac Signs or Rasi was ascending from the horizon at the time and place of your birth.  These Rasi ascend from the horizon because the earth’s rotation makes the star constellations appear to rise.

This Rasi or Zodiac sign rising from the horizon at your birth is called the Udaya Lagna or the Most Effective Point (MEP). Vedic astrology postulates that the Udaya Lagna is the primary heavenly influence on your life. Thus the astrologer places this ascending zodiac sign in the first house of the kundli.  Then, going counter-clockwise the kundli is filled in with the other eleven houses based on the nine navagraha (planets, sun and moon), resulting in a chart as illustrated in the diagram.  A kundli shows the position of these grahas at the moment of birth. Each house has associated karaka (significant) planets/graha that can alter the interpretation of a particular house.

From the Kundli, vedic astrology develops further complicated relationships based on 27 lunar mansions, or nakshatras. These are considered important in lessening karma.

Vedic astrology is part of the fabric of Hindu culture.  In fact, following a judgment of the Andhra Pradesh High Court in 2001 favouring astrology, some Indian universities now offer advanced degrees in Hindu astrology.

But is this the original way that the ancients read zodiac astrology? How did the Vedas portray it?

Be Warned! Answering this question will open up your horoscope in ways you will not expect. It could embark you on a different journey then you intended in just getting your kundli from today’s Jyotish astrologer.

Where did the Zodiac come from?

Wikipedia tells us that Jyotisha was one of the six disciplines (or Vedanga) discussed in the vedas. But originally the vedas did not mention planets (navagraha).  The vedas used astrology solely as way of preparing calendars to calculate auspicious festival dates.  It was the Greeks, conquering up to the Indus Valley, who brought what has today become vedic astrology to India.

Greek astrology and astronomy also transmitted the twelve zodiacal signs beginning with Aries and the twelve astrological places beginning with the ascendant.[17]:384 The first evidence of the introduction of Greek astrology to India is the Yavanajātaka which dates to the early centuries CE.[17]  The Yavanajātaka (literally “Sayings of the Greeks”) was translated from Greek to Sanskrit by Yavaneśvara during the 2nd century CE, and is considered the first Indian astrological treatise in the Sanskrit language.

In fact, Horoscope comes from the Greek horo (ώρα) meaning ‘hour, season or period of time’ and the Greek skopus (σκοπός) meaning ‘goal or mark on which to focus’. Astrology also comes from astro (άστρο) ‘star’ and logia (λογια) ‘study of’. The very words describing this art come from Greek.  But today’s jyotish never actually studies these star constellations images – which the word ‘Astrology’ implies.

Even the Greeks, however, did not invent astrology or the signs of the zodiac.  They, in turn, learned them from the ancient Chaldeans of Babylon

Babylonian astrology was the first organized system of astrology, arising in the 2nd millennium BC.

Probably the oldest book in existence today, written over 4000 years ago, is Job.  Job is one of the books in the Bible. Job states that the star constellations were made by God the Creator.

He is the Maker of the Bear and Orion,
the Pleiades and the constellations of the south (or Leo).

So does Amos, another ancient Rsi prophet of the Bible.

He who made the Pleiades and Orion,
who turns midnight into dawn
and darkens day into night,
who calls for the waters of the sea
and pours them out over the face of the land—
the Lord is his name.

The Pleiades are stars that make up part of the Taurus constellation.  If Job speaks of them in a book more than 4000 years old, the zodiac constellations have been with us a very long time.

The Jewish Historian Josephus (37 – 100 CE), writing about the first Manu, whom the Bible called Adam, stated about him and his immediate children:

They also were the inventors of that peculiar sort of wisdom which is concerned with the heavenly bodies, and their order.

So the study of the signs in the stars began with the very first humans!  The children of Manu/Adam placed 12 signs or rasi in the stars as a memory aid to help remember the Creator’s Great Story.  This story affects you, showing how your destiny is fused into this cosmic story, not by the aspect of the planets upon you, but by the powers and purposes from the Creator Himself, which these 12 signs point to.

Zodiac from the Creator Himself

Long before prophetic messages were recorded in books, they were placed in the stars as images to tell the story of God’s plan.  Thus the original zodiac was not to guide us to wealth, love, and good fortune depending on the time and place of our birth.  The zodiac was a visual story to reveal the Creator’s plan.

We see this from the creation account at the beginning of the Hebrew Vedas (Bible). During the creation period it says:

And God said, “Let there be lights in the expanse of the sky to separate the day from the night, and let them serve as signs to mark sacred times, and days and years…

Modern astrology claims to know about human affairs and events on earth based on the position of the stars at one’s birth. But it is not the stars that affect our lives. They are just signs marking events that the Creator planned – and He affects our lives.

Since the creation of the stars were to ‘mark sacred times’, the intent behind the constellations was for us to know His horoscope through the twelve Zodiac Signs. They form a Story in the Stars, and the study of this Story was the original astrology.

Thus the Plan of God, given through 12 Rasi pictures, remembered in the constellations of the Zodiac, was studied, told and retold in the centuries after Adam/ Manu. After the flood, the descendants of Manu corrupted the original story and it became what we see today.

Astrology and Rsi Prophets together

Studying the stars (astrology) to mark sacred times (horoscope) does not tell all that the Creator planned about these events.  His written record gives further details.  We see an example of this in the birth of Jesus.  The Gospel records how astrologers understood his birth from the stars.

After Jesus was born in Bethlehem in Judea, during the time of King Herod, Magi from the east came to Jerusalem 2 and asked, “Where is the one who has been born king of the Jews? We saw his star when it rose and have come to worship him.”

The Magi (astrologers) knew from the stars ‘who’ was born (the Christ). But the stars did not tell them ‘where’.  For that they needed the written revelation.

3 When King Herod heard this he was disturbed, and all Jerusalem with him. 4 When he had called together all the people’s chief priests and teachers of the law, he asked them where the Messiah was to be born. 5 “In Bethlehem in Judea,” they replied, “for this is what the prophet has written: 6 “‘But you, Bethlehem, in the land of Judah, are by no means least among the rulers of Judah; for out of you will come a ruler who will shepherd my people Israel.’

The astrologers needed the prophetic writings to more fully understand what they observed from the star.  It is the same for us today.  We can gain the insight that the earliest humans had from the astrological horoscope of the ancient zodiac.  But we can get more understanding through the prophetic writings which further develops each zodiac sign.  We will do this, going through each astrological sign of the original Zodiac story.

We will also use the ancient zodiacs, over two thousand years old, that exist still in Egyptian Temples. The most famous are the zodiacs of the Dendera Temple and the Luxor Temple. They provide ancient evidence to guide us.

Where does the story begin?  Today’s horoscope reading usually begins with Aries. But this was not so from ancient times, when it began with Virgo as we see in the ancient linear Egyptian Esna Zodiac.

We begin the Zodiac story with Virgo and then continue through the Rasi. Each Zodiac Rasi builds a chapter. Think of them as primeval Kundali that build on each other to form a Story. Here are the Kundali of the Ancient Jyotisha