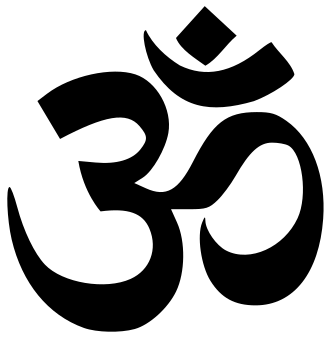 Sound is an altogether different medium with which to understand ultimate reality (Brahman) than sacred images or places.  Sound is essentially information transmitted by waves.  The information carried by sound can be beautiful music, a set of instructions, or any message that someone wishes to send.

There is something Divine, or reflects part of the Divine, when someone utters a message with sound.  This is captured in the sacred sound and symbol Om (Aum), referred to as the Pranava.  Om (or Aum) is both a sacred chant and a tri-part symbol.  The meaning and connotations of Om vary between diverse schools in various traditions. The tri-part pranava symbol is prevalent in ancient manuscripts, temples, monasteries and spiritual retreats across India.  The Pranava mantra is to understand ultimate reality (Brahman) better.  Om is equivalent to aksara or ekaksara – the one imperishable reality.

In that regard it is significant that the Veda Pusthakan (Bible) records creation occurring through speech of a Tri-Part Agent.  God ‘spoke’ (Sanskrit व्याहृति (vyahriti) and there was a transmission of information propagating as waves through all lokas causing an ordering of mass and energy into the complex universe of vyahritis today.  This occurred because the ‘Spirit of God’ hovered or vibrated over the matter.  Vibration is both a form of energy and also constitutes the essence of sound.  The Hebrew Vedas narrate how the 3-fold: God, the Word of God, and the Spirit of God, propagated His utterance (vyahriti), resulting in the universe we observe now.  Here is the record.

In the beginning, God created the heavens and the earth. 2 The earth didn’t have any shape. And it was empty. There was darkness over the surface of the waves. At that time, the Spirit of God was hovering over the waters.

9 God said, “Let the water under the sky be gathered into one place. Let dry ground appear.” And that’s exactly what happened. 10 God called the dry ground “land.” He called all the water that was gathered together “seas.” And God saw that it was good.

20 God said, “Let the seas be filled with living things. Let birds fly above the earth across the huge space of the sky.” 21 So God created the great sea creatures. He created every kind of living thing that fills the seas and moves about in them. He created every kind of bird that flies. And God saw that it was good. 22 God blessed them. He said, “Have little ones so that there will be many of you. Fill the water in the seas. Let there be more and more birds on the earth.” 23 There was evening, and there was morning. It was day five.

The Hebrew Vedas then recount that God created mankind in the ‘image of God’ so that we could reflect the Creator.  But our reflection is limited in that we cannot command nature simply by speaking to it.  But Jesus did do this.  We see how the Gospels record these events

Jesus had authority in teaching and healing by ‘word’. The Gospel records how he demonstrated power such that his disciples were filled with ‘fear and amazement’.

22 One day Jesus said to his disciples, “Let us go over to the other side of the lake.” So they got into a boat and set out. 23 As they sailed, he fell asleep. A squall came down on the lake, so that the boat was being swamped, and they were in great danger.

24 The disciples went and woke him, saying, “Master, Master, we’re going to drown!”

He got up and rebuked the wind and the raging waters; the storm subsided, and all was calm. 25 “Where is your faith?” he asked his disciples.

In fear and amazement they asked one another, “Who is this? He commands even the winds and the water, and they obey him.”

The word of Jesus commanded even the wind and the waves!  No wonder the disciples were filled with fear.  On another occasion he showed similar power with thousands of people.  This time he did not command wind and wave – but food.

Some time after this, Jesus crossed to the far shore of the Sea of Galilee (that is, the Sea of Tiberias), 2 and a great crowd of people followed him because they saw the signs he had performed by healing the sick. 3 Then Jesus went up on a mountainside and sat down with his disciples. 4 The Jewish Passover Festival was near.

5 When Jesus looked up and saw a great crowd coming toward him, he said to Philip, “Where shall we buy bread for these people to eat?” 6 He asked this only to test him, for he already had in mind what he was going to do.

7 Philip answered him, “It would take more than half a year’s wages[a] to buy enough bread for each one to have a bite!”

8 Another of his disciples, Andrew, Simon Peter’s brother, spoke up, 9 “Here is a boy with five small barley loaves and two small fish, but how far will they go among so many?”

10 Jesus said, “Have the people sit down.” There was plenty of grass in that place, and they sat down (about five thousand men were there). 11 Jesus then took the loaves, gave thanks, and distributed to those who were seated as much as they wanted. He did the same with the fish.

12 When they had all had enough to eat, he said to his disciples, “Gather the pieces that are left over. Let nothing be wasted.” 13 So they gathered them and filled twelve baskets with the pieces of the five barley loaves left over by those who had eaten.

14 After the people saw the sign Jesus performed, they began to say, “Surely this is the Prophet who is to come into the world.” 15 Jesus, knowing that they intended to come and make him king by force, withdrew again to a mountain by himself.

When the people saw that Jesus could multiply food simply by speaking thanksgiving they knew he was unique.  He was Vagisha (वागीशा, Lord of speech in Sanskrit). But what did it mean?  Jesus explained later on by clarifying the power or prana of his words

The Holy Spirit gives life. The body means nothing at all. The words I have spoken to you are full of the Spirit. They give life.

Jesus was claiming that he embodied in the flesh the tri-fold Creator (Father, Word, Spirit) that had spoken the cosmos into existence.  He was Om alive in human form.  He was the sacred tri-part symbol in living flesh. He demonstrated prana (प्राण) or life-force to be the living pranava by speaking his power over wind, wave and matter.

How can that be? What does it mean?

Jesus’ disciples had a hard time understanding this.  The Gospel records that right after feeding the 5000:

45 Immediately Jesus made his disciples get into the boat and go on ahead of him to Bethsaida, while he dismissed the crowd. 46 After leaving them, he went up on a mountainside to pray.

47 Later that night, the boat was in the middle of the lake, and he was alone on land. 48 He saw the disciples straining at the oars, because the wind was against them. Shortly before dawn he went out to them, walking on the lake. He was about to pass by them, 49 but when they saw him walking on the lake, they thought he was a ghost. They cried out, 50 because they all saw him and were terrified.

Immediately he spoke to them and said, “Take courage! It is I. Don’t be afraid.” 51 Then he climbed into the boat with them, and the wind died down. They were completely amazed, 52 for they had not understood about the loaves; their hearts were hardened.

53 When they had crossed over, they landed at Gennesaret and anchored there. 54 As soon as they got out of the boat, people recognized Jesus. 55 They ran throughout that whole region and carried the sick on mats to wherever they heard he was. 56 And wherever he went—into villages, towns or countryside—they placed the sick in the marketplaces. They begged him to let them touch even the edge of his cloak, and all who touched it were healed.

This is the fundamental reason that people in his day were so divided about Jesus.  In Vedic tradition we would say he was claiming to be the Pravana or Om, the aksara who spoke the world into existence, and then became became human – ksar.  More than understanding intellectually is the need to remove obstinacy from our hearts.

This is why the preparing work of John was vital.  He called people to repent by confessing their sin instead of hiding it.  If the disciples of Jesus had hard hearts that needed repenting and confessing of sin, how much more you and me!

I have found praying this confession given as a mantra in the Hebrew Vedas to be helpful. Perhaps meditating or chanting this as well as Om will work in your heart too.

3 For I know my transgressions,
and my sin is always before me.
4 Against you, you only, have I sinned
and done what is evil in your sight;
so you are right in your verdict
and justified when you judge.

Create in me a pure heart, O God,
and renew a steadfast spirit within me.
11 Do not cast me from your presence
or take your Holy Spirit from me.
12 Restore to me the joy of your salvation
and grant me a willing spirit, to sustain me.

We need this repentance to understand what it means that, as the Living Word, Jesus is the ‘Om’ of God.

Why did he come? We see next.