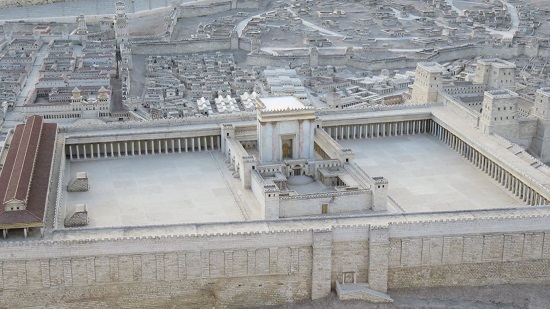 Jesus had entered Jerusalem in a manner claiming Kingship and as a Light for all nations.  This started one of the most tumultuous weeks in history, still felt today.  But it is what he did next at the Temple that exploded his simmering conflict with the leaders.  To understand what happened at that Temple we should compare it with the richest and most popular temples today.

(Rajarajesvaram or Peruvudaiyār Kōvil) was built (1003–1010 CE) by Tamil King Raja Raja Chola 1, making it a royal temple.  With the power and resources of king and kingdom behind its construction, that royal temple was large, built from massively cut granite stones. When completed the Brihadishvara Temple was the largest in India and today is considered the best example of the “Great Living Chola Temples“.

Built as a Southern home for Shiva to complement his regular home in Mount Kailasa, it also functioned as an employer, a landlord, and a money lender. With these activities the Brihadisvara Temple turned into a major economic institution for Southern India, attaching much wealth to it.  The King’s government appointed the royal temple staff who worked within well-defined powers and responsibilities.  Consequently, no other temple had property, gold, and cash like this temple had, until eclipsed by…

This is at Tirupati, Andhra Pradesh. The temple is dedicated to Venkateswara (Balaji, Govinda, or Srinivasa).  Other names for this temple are: Tirumala Temple, Tirupati Temple, and Tirupati Balaji Temple. It is controlled by the Andhra Pradesh Government, which uses the revenue generated from this Temple. The Venkateswara Temple is the richest temple in India and is said to be among the wealthiest religious institutions in the world.

It regularly attracts one lakh visitors per day and receives abundant offerings from devotees, usually in the forms of cash and gold, but also of hair.  This stems from the tale about Venkatesvara falling into a dowry debt trap marrying a local girl. Many devotees believe they help to pay off some of that interest for him. With COVID-19, the Temple has fallen on hard times and has had to lay off 1200 workers.

in Kerala recently topped the list of richest temples.  At this temple Padmanabhaswamy, enshrined on the serpent Adi Shesha, is the principal deity.  Its biggest festival is laksha deepam, or one lakh lamps which occurs every 6 years.  In 2011, government officials announced that they discovered treasures containing sacks of diamonds, gold coins, golden idols, jewellery and other riches in secret underground vaults of the Padmanabhaswamy Temple. Experts now estimate its worth to be 20 billion USD.

The Hebrews had only one Temple, and it was in Jerusalem.  Like Brihadishvara, it was a royal temple, built by King Solomon ca 950 BCE.  It was an elaborate structure with many carvings, decorations and much gold.  The Hebrews built a Second Temple on the exact same spot after the destruction of the First Temple. The powerful Herod the Great greatly expanded this Temple, so that at Jesus’ entry it was one of the most impressive structures in the Roman Empire, extensively decorated with gold throughout.  The steady stream of Jewish pilgrims and tourists from across the Roman Empire swelled into floods of visitors on the prescribed festivals.  Thus there was a large workforce of priests and suppliers who turned the temple worship into a rich industry.

In riches, prestige, power, and magnificence this temple was like the Brihadishvara, Venkateswara and Padmanabhaswamy temples.

Yet it was different in other ways. It was the sole Temple across the whole land.  There were no murtis or idols on its premises. This reflected what God’s ancient Hebrew spokesmen regularly claimed about His dwelling.

This is what the Lord says:

“Heaven is my throne,
and the earth is my footstool.
Where is the house you will build for me?
Where will my resting place be?
2 Has not my hand made all these things,
and so they came into being?”
declares the Lord.

This Temple was not where God dwelt. Instead it was where man could encounter God, where His presence was active. God was the active agent there, not the worshipers.

Think of it this way.  When going to Brihadishvara, Venkateswara and Padmanabhaswamy temples, devotees choose which deity they will worship.  For example, though Brihadishvara is dedicated to Shiva it houses other deities including: Vishnu, Ganesha, Harihara (Half Shiva, half Vishnu), Saraswati.  So devotees expect to choose which deities to worship when entering Brihadishvara.  They may pay homage to all, some or any combination of their choice.  This is true in all these temples that house many murtis. The onus to choose the deity rests with the yatri.

Furthermore, at these temples it is the devotees who choose what kind or amount of gift to offer.  These temples have grown rich over the hundreds of years as yatris, kings and officials decided what each of them will give.  The deities themselves in the Temples didn’t prescribe what gift should be offered.

Though we pilgrimage to worship the deities, we operate as if the deities actually are powerless since we never expect them to choose us; rather we choose them.

With this optic of asking whom is the active agent in the Temple, the God or the yatri, we can understand what happened with Jesus on Monday, Day 2, of Passion Week.  The God of that Temple, the One who made Heaven and earth, chose him and the required gift.  With this in mind, we review the day’s events.

Selecting Lambs on that Day

Jesus entered Jerusalem on Sunday, Nisan 9, Day 1 of Holy Week.  The ancient Hebrew Vedas gave regulations for the next day, Nisan 10, making it unique in their calendar.  Fifteen hundred years beforehand, God had directed Moses how to prepare for the upcoming Passover Festival.  God had stated:

While the Israelites were still in the land of Egypt, the Lord gave the following instructions to Moses and Aaron: 2 “From now on, this month will be the first month of the year for you. 3 Announce to the whole community of Israel that on the tenth day of this month each family must choose a lamb or a young goat for a sacrifice, one animal for each household.

… and only that day

As you might imagine, the vast throngs of people and animals, the noise of the bartering, the currency exchange would turn the Temple on Nisan 10 into a frenzied market.  The activities and pilgrims seen today at Brihadishvara, Venkateswara and Padmanabhaswamy temples would seem calm by comparison.

Jesus is Selected – by Shutting Down the Temple

The Gospel records what Jesus did that day.  When it states the ‘next morning’ this was the day after his royal entry into Jerusalem, the day to select Passover lambs in the Temple, the 10th of Nisan.

So Jesus came to Jerusalem and went into the Temple (Nisan 9). After looking around carefully at everything, he left because it was late in the afternoon. Then he returned to Bethany with the twelve disciples…

When they arrived back in Jerusalem, Jesus entered the Temple and began to drive out the people buying and selling animals for sacrifices. He knocked over the tables of the money changers and the chairs of those selling doves, 16 and he stopped everyone from using the Temple as a marketplace.17 He said to them, “The Scriptures declare, ‘My Temple will be called a house of prayer for all nations,’ but you have turned it into a den of thieves.”

Jesus went into the Temple on Monday, Nisan 10, and zealously shut down the commercial activity.  The buying and selling had created a barrier for prayer, especially for those of other nations.   Being a Light for these nations, he broke that barrier by stopping the commerce.  But something unseen also happened simultaneously, which we know by the title that Swami John had identified Jesus.

In announcing him John had said:

The next day John saw Jesus coming toward him and said, “Look! The Lamb of God who takes away the sin of the world!

Jesus was ‘the Lamb of God’.  In Abraham’s sacrifice, it was God who had selected the lamb to replace Abraham’s son.  The Temple was at this same location.  When Jesus entered the Temple on Nisan 10 God selected him as His Passover Lamb.   To be selected he had to be in the Temple on this exact day.

Sacrifice and offering you did not desire—
but my ears you have opened—
burnt offerings and sin offerings you did not require.
7 Then I said, “Here I am, I have come—
it is written about me in the scroll.
8 I desire to do your will, my God;
your law is within my heart.”

Temple activities are supported by gifts and offerings.  But this had never been the LORD God’s primary desire.  The prophecy indicated that He desired a certain someone.  When God would see him he would call him, and this person would respond.  This happened when Jesus shut down the Temple.  The prophecy predicted it and the way in which events unfolded the rest of the week demonstrated it.

Why Jesus shutdown the Temple

Why did he do it?  Jesus answers with his quote from Isaiah, ‘My house will be called a house of prayer for all nations’.  Read the full prophecy (with his quote underlined).

And foreigners who bind themselves to the Lord
to minister to him,
to love the name of the Lord,
and to be his servants,
all who keep the Sabbath without desecrating it
and who hold fast to my covenant—
7 these I will bring to my holy mountain
and give them joy in my house of prayer.
Their burnt offerings and sacrifices
will be accepted on my altar;
for my house will be called
a house of prayer for all nations.”

The ‘holy mountain’ was Mount Moriah, where God had selected the lamb for Abraham.  The ‘house of prayer’ was the Temple which Jesus entered on Nisan 10.  However, only Jews could enter the Temple to worship the LORD God.  But Isaiah had foreseen that ‘foreigners’ (non-Jews) would one day see their gifts accepted by Him.  Through Isaiah, Jesus announced that his shutdown would bring about this access for non-Jews.  How this would happen becomes clear over the next days.

Next days in the Holy Week

We add the events of that Monday to the Timeline, inserting the Passover Lamb selection regulations to the upper side and the Temple shutdown by Jesus on the lower side.

The Gospel records the effect of Jesus’ shutdown:

The chief priests and the teachers of the law heard this and began looking for a way to kill him, for they feared him, because the whole crowd was amazed at his teaching.

In shutting down the Temple Jesus setup a showdown with the leaders as they now plotted his murder.  We see, continuing with Day 3, Jesus uttering a curse lasting thousands of years.