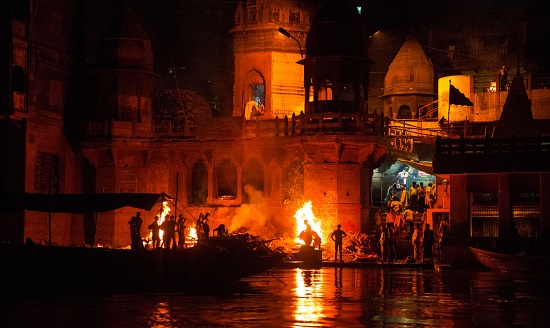 Banaras is the holiest of the seven sacred cities (Sapta Puri).  Over one million pilgrims come annually for Tirtha-Yatra, many as Jivan Mukta, because of its location, (where the Varuna and Assi rivers join the Ganges), and its prominence in mythology and history.  Also known as Banares, Varanasi, Avimukta, or Kashi (“City of Light”), Banaras was where Siva found forgiveness for sins.

According to the Kasi Khanda (the ‘travel guide’ Purana for major Tirtha sites), Siva, in the form of Bhairava, and in a heated argument with Brahma, severed one of Brahma’s heads from his body.  Because of this grievous crime, the severed head stuck to his hand – the guilt would not depart from him.  Siva/Bhairava travelled to many places to rid himself of the guilt (and the attached head) but only when he came to Banaras did the severed head slip away from his hand. Therefore, Siva desired Banaras above all other tirthas and today Banaras has many shrines and lingas dedicated to him.

Kala Bhairava is a manifestation of the terrible qualities of Siva, and Kala (Sanskrit: काल) can mean either ‘death’ or ‘black’. This makes Bhairava the custodian of death in Banaras. Yama, another god of death is unable to enter Varanasi. Thus Bhairava fills the role of punishing and collecting souls. It is said that those who die in Varanasi will face Bhairava (bhairavi yatana).

So Banaras is an auspicious place to die and be cremated since the theme of death is strong there, and there is increased hope of liberation from death and samsara. Many come to Varanasi anticipating their approaching death, waiting in hospice for it. In this sense Varanasi is the final destination in life’s pilgrimage. There are two prominent cremation ghats in Banaras, the Manikarnika and Harishchandra. Manikarnikais the more popular of the two, known as the Sanctuary of Death, is along the riverfront where cremation fires burn continually. Up to 30000 devotees may bathe in the Ganges from Banaras’ ghats on any day.

Accordingly, people flock from all over India to die in Banaras so at their time of death they will be instructed by Siva on how to break the cycle of rebirth and thus achieve moksha.  In short, Banaras is the Holy City of the Dead.  But there is another such city and it is just as holy, just as ancient…

Jerusalem is another Holy City of the Dead worth knowing about.  It is considered auspicious to be entombed there since it is believed that those buried there will be the first to resurrect from death, finding liberation from the hold that death has on them.  Consequently, for millennia, Jews have sought to be buried there anticipating this coming freedom.

It was to this Holy City that Jesus came, on the day now called Palm Sunday. The manner in which he did so, and its timing showed him to be a jivan mukta (liberated from death even while living). But he was not only jivan mukta for himself, but purposed to be jivan mukta for you and me. We learn how he did so as he arrived in the Holy City of the Dead, after raising Lazarus to life.  The Gospel narrates:

Jesus Comes to Jerusalem as King

12 The next day the great crowd that had come for the festival heard that Jesus was on his way to Jerusalem. 13 They took palm branches and went out to meet him, shouting,

“Blessed is he who comes in the name of the Lord!”

“Blessed is the king of Israel!”

14 Jesus found a young donkey and sat on it, as it is written:

15 “Do not be afraid, Daughter Zion;
see, your king is coming,
seated on a donkey’s colt.”

17 Now the crowd that was with him when he called Lazarus from the tomb and raised him from the dead continued to spread the word. 18 Many people, because they had heard that he had performed this sign, went out to meet him. 19 So the Pharisees said to one another, “See, this is getting us nowhere. Look how the whole world has gone after him!”

To fully appreciate what happened we need to understand what the Hebrew Vedas had foretold about the ancient Hebrew Kings’ customs.

Starting with the ancestral King David (1000 BCE), Hebrew Kings would annually mount their royal horse to lead a procession into the Holy City Jerusalem.  Though different in form and procedure from the ancient Vedic Ashvamedha/asvamedha horse sacrifice, the purpose was the same – to prove their imperial sovereignty to their subjects and other rulers.

The ‘Different’ Entry Prophesied by Zechariah

Zechariah, who had prophesied the Coming King’s name, had also prophesied that this Coming King would enter Jerusalem, but seated on a donkey instead of royal mount.  Various Hebrew Sages foresaw different aspects of this highly unusual event.

Part of Zechariah’s prophecy that was quoted in the Gospel above is underlined.  Zechariah’s complete prophecy was:

The Coming of Zion’s King

9 Rejoice greatly, Daughter Zion!
Shout, Daughter Jerusalem!
See, your king comes to you,
righteous and victorious,
lowly and riding on a donkey,
on a colt, the foal of a donkey.
10 I will take away the chariots from Ephraim
and the warhorses from Jerusalem,
and the battle bow will be broken.
He will proclaim peace to the nations.
His rule will extend from sea to sea
and from the River to the ends of the earth.
11 As for you, because of the blood of my covenant with you,
I will free your prisoners from the waterless pit.

Zechariah prophesied a Coming King that would be different from other kings.  He would not become king by using ‘chariots’, ‘warhorses’ and ‘battle bow’.  In fact this king would remove these weapons and instead ‘proclaim peace to the nations’.  However, this King would still have to defeat an enemy – the greatest enemy.

This becomes clear when we understand what this king was to face.  Normally, a king’s enemy is another king from an opposing nation, or another army, or rebellion from his people, or people who are against him.  But the prophet Zechariah wrote that the King revealed on a ‘donkey’ was going to ‘free the prisoners from the waterless pit’ (v11).  The ‘pit’ was the Hebrew way of referring to the grave, or death.  This Coming King was going to free those who were prisoners, not of dictators, corrupt politicians, evil kings, or trapped in jails, but those who were ‘prisoners’ of death.

When speaking of saving people from death we mean saving someone to simply delay death.  We may, for example, rescue a drowning person, or provide medicine saving someone’s life.  This only postpones death because the ‘saved’ person will die later.  But Zechariah was not prophesying about saving people ‘from death’ but about rescuing those imprisoned by death – those already dead.  The King, coming on a donkey, prophesied by Zechariah, would face and defeat death itself – freeing its prisoners.

Jesus merged the royal Hebrew ‘Ashvamedha’ procession with the prophecy of Zechariah by entering Jerusalem on the day now called Palm Sunday.  Instead of a war horse he was mounted on a donkey.  The people sang the same song from their sacred Gitas (Psalms) for Jesus as they had done for David:

Lord, save us!
Lord, grant us success!

26 Blessed is he who comes in the name of the Lord.
From the house of the Lord we bless you.
27 The Lord is God,
and he has made his light shine on us.
With boughs in hand, join in the festal procession
up to the horns of the altar.

The people sang this ancient song to him because they knew Jesus had raised Lazarus, and they anticipated his arrival into Jerusalem.  They shouted, ‘Hosanna’ meaning ‘save’, exactly as Psalm 118:25 had written long before.  What was Jesus going to ‘save’ them from?  The prophet Zechariah already told us – death itself.  How fitting that Jesus declared himself to be this King by entering their Holy City of the Dead on a donkey.

On Palm Sunday when Jesus entered Jerusalem (also known as the Triumphant Entry) the religious leaders opposed him.  The Gospels records Jesus’s response to their opposition.

As he approached Jerusalem and saw the city, he wept over it 42 and said, “If you, even you, had only known on this day what would bring you peace—but now it is hidden from your eyes. 43 The days will come upon you when your enemies will build an embankment against you and encircle you and hem you in on every side. 44 They will dash you to the ground, you and the children within your walls. They will not leave one stone on another, because you did not recognize the time of God’s coming to you.”

Jesus said the leaders should have ‘recognized the time of God’s coming’ on ‘this day’.

What did he mean?  What had they missed?

They had missed the riddle of ‘sevens’ prophesied by Daniel 537 years beforehand in their Vedas.  This foretelling by sevens predicted the arrival of the King to the day over five hundred years earlier.

Palm Sunday was auspicious since the prophecies of Zechariah (about the King coming on a donkey to defeat death) and Daniel’s prophecies combined on that same day and in the same city – Jerusalem, The Holy City of the Dead.

For us in the Nations

Banaras is the Tirtha Yatra Holy City of the Dead because of its auspicious location. The blessings come upon the pilgrims only if they come to the same location of Bhairava’s story recounted above.  This is why its other name is Kashi, City of Light.

With Jesus as our Jivan Mukta it was to be different since his victory over death in Jerusalem would, according to him, proceed to all nations outside Jerusalem.

Because he declared himself as ‘Light of the World’ whose victory would go out from Jerusalem to all nations – wherever you and I live.  We would not have to go to Jerusalem in Yatra to be blessed by Jesus’ victory. We see how in the events that week leading to his battle with Death.