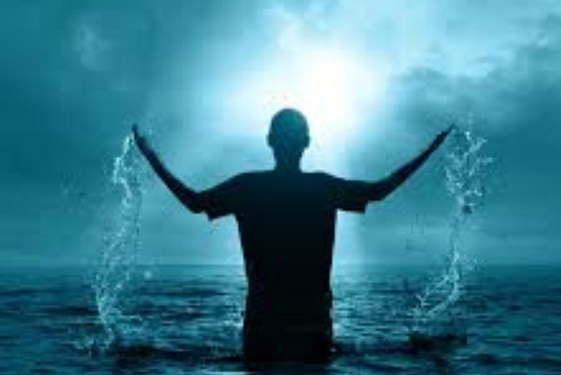 Karma, like gravity, is a law that is acting on you and me.  Karma can mean many things, but the fundamental idea is that we have deeds, and the merit for virtuous deeds and the penalty for evil deeds attach to our souls.  Unless our deeds are completely virtuous then there is a payment required of us, and unless that payment is made we are in bondage.

All of us instinctively feel this in some way.  And by our knowledge and wisdom we have invented many ways to deal with accumulated karma.  There is karma marga (way of works) where we labor hard to have good works.  There are mantras and pujas that are recited.  There are festivals and bathings that are sought, such as the Kumbha Mela Festival.  These ways are all difficult and we never have assurance that our efforts have been sufficient.  Were the motives behind our actions good enough?  Were a sufficient number of deeds good enough?  We are never sure. And so, like gravity, we live in karma, unable to break free and attain Moksha.  This is why before doing pujas people say the Prartha Snana (or Pratasana) mantram (“I am a sinner. I am the result of sin. I am born in sin. My soul is under sin. I am the worst of sinners. O Lord who has the beautiful eyes, Save me, O Lord of the Sacrifice.”)

So who is this ‘Lord of the sacrifice’?  And how can He save us from this Law of Karma?  In the very earliest Veda texts, the God who was Lord of all Creation – the one who made and controlled the universe – was called Prajapati. It is through Prajapati that everything else came into being.

Around the same time that the Rg Veda was written down, about 1500 BC, another set of scriptures was also being recorded in another part of the earth – in what is now called the Middle East.  These earliest Hebrew texts of the Veda Pusthakam (Bible) is known as the Torah.  The Torah begins with the declaration that there is one God who is the Creator of the whole universe. In the transliteration from the original Hebrew this God was called either Elohim or Yahweh and these names are interchanged back and forth throughout in these Hebrew texts. Thus, like Prajapati in the Rg Veda, Yahweh or Elohim in the Torah was (and is) Lord of all Creation.

Early In the Torah, Yahweh also reveals Himself as the God ‘who Provides’ in a remarkable encounter with the Rsi called Abraham. We will look at this encounter in more detail later. For the moment I just want to note the similarity with Yahweh who provides (transliterated from Hebrew as Yahweh-yireh) with that of Prajapati in Rg Veda who is “the protector or supporter of creatures”.

In what way does Yahweh provide? We have already noted the need we have to get free from Karma, and we have noted the mantram which prays to the ‘Lord of the Sacrifice’.   The Rg Veda expands on this by telling us:

“The actual sacrifice is Prajapati Himself” [Sanskrit: ‘Pajapatir yajnah’]

Sanskrit scholar H. Aguilar comments on this by translating from Sathapatha Brahmana the following:

The Vedas from the earliest time declares that Prajapati (or Yahweh) recognized the need we had so He provided for our Karma in a self-sacrifice. How He did it we look at in later articles as we concentrate on the Purusa-Prajapati sacrifice of the Purusasukta in Rg Veda, but for now just think how important this is. The Svetasvataropanisad says

If you are interested in escaping Karma, if you desire Moksha or enlightenment then it would be wise to be informed about what has been revealed about how and why Prajapati (or Yahweh) provided for us through self-sacrifice of Jesus so that we can escape karma and gain heaven.  And the Vedas do not leave us hanging.  In Rg Veda is the Purusasukta which describes the incarnation of Prajapati and the sacrifice He made for us.  Click here to see the introduction to Purusasukta which describes Purusa like the Bible (Veda Pusthakam) describes Yeshu Satsang (Jesus of Nazareth) and his sacrifice to bring you Moksha or Mukti (immortality).  Then we continue through these vedas and see how the ancient Rsi Job could declare his freedom from Karma and his anticipation of eternal life – he had been given Moksha.