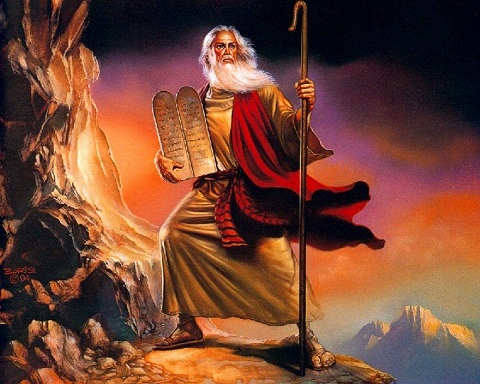 When we think of blessing and good fortune our minds go to Lakshmi, the goddess of fortune, success and wealth.  She blesses hard work when it is not done in greed.  In the story of the Churning of the Milky Ocean, Lakshmi left the devas and entered the milky ocean because of the disrespect that Indra showed when he threw away the sacred flowers.   However, after one thousand years of churning the ocean for her return, she blessed the faithful with her re-birth.

When we think of destruction, desolation and annihilation our minds go to Bhairava, the fierce incarnation of Shiva, or even to the third eye of Shiva.  It is almost always closed but he does open it to destroy evil doers.  Both Lakshmi and Shiva receive much attention from devotees, because people desire the blessings from the one and fear the curse or destruction of the other.

Blessings & Curses … to the Israelites … for instructing us.

The Creator God revealed in the Hebrew Vedas was the author both of such blessing to rival that of Lakshmi and of curse and destruction as terrible as that of Bhairava or Shiva’s third eye.  This was directed to his chosen people – the Israelites – who were his devotees. They were given after God led the Israelites out of slavery in Egypt and gave them the Ten Commandments – the standard to know whether sin controlled them or not.  These blessings and curses were directed at the Israelites but were announced long ago so that all other nations would take note and realize that he offers us blessings with the same power He bestowed on the Israelites.  All of us who want prosperity & blessing, and avoid destruction & curse should learn from the experience of the Israelites.

Sri Moses lived about 3500 years ago and he wrote the first books that make up the Hebrew Vedas.  His last book, Deuteronomy, contain his final words written just before he died. These were his Blessings to the people of Israel – the Jews, but also his Curses.  Moses wrote that these Blessings & Curses would shape world history and should be noticed, not just by the Jews, but also by all other nations. These Blessings & Curses have affected history in India.  So this was written for us to reflect on. The complete Blessings and Curses are here.  The summary follows.

The Blessings of Sri Moses

Moses began by describing the blessings that the Israelites would receive if they obeyed The Law (ie the Ten Commandments).  The blessings from God would be so great that all other nations would recognize His blessing. The outcome from these blessings would be:

Then all the peoples on earth will see that you are called by the name of the Lord, and they will fear you. (Deuteronomy 28:10)

However, if the Israelites failed to obey the Commandments then they would receive Curses that would match and mirror the Blessings. These Curses would be seen by the surrounding nations so that:

You will become a thing of horror, a byword and an object of ridicule among all the peoples where the LORD will drive you. (Deuteronomy 28:37)

And the Curses would extend through history.

They will be a sign and a wonder to you and your descendants forever. (Deuteronomy 28:46)

But God warned that the worst part of the Curses would come from other nations.

The LORD will bring a nation against you from far away, from the ends of the earth, like an eagle swooping down, a nation whose language you will not understand, a fierce-looking nation without respect for the old or pity for the young. They will devour the young of your livestock and the crops of your land until you are destroyed … until you are ruined. They will lay siege to all the cities throughout your land until the high fortified walls in which you trust fall down. They will besiege all the cities throughout the land. (Deuteronomy 28:49-52)

It would go from bad to worse.

You will be uprooted from the land you are entering to possess. Then the LORD will scatter you among all nations, from one end of the earth to the other. … Among those nations you will find no repose, no resting place for the sole of your foot. There the LORD will give you an anxious mind, eyes weary with longing, and a despairing heart. (Deuteronomy 28:63-65)

These Blessings and Curses were established by formal agreement between God and the Israelites:

…to confirm you this day as his people, that he may be your God as he promised you and as he swore to your fathers, Abraham, Isaac and Jacob. I am making this covenant, with its oath … also with those who are not here today. (Deuteronomy 29:12-15)

Your children who follow you in later generations and foreigners who come from distant lands will see the calamities that have fallen on the land and the diseases with which the LORD has afflicted it. … nothing planted, nothing sprouting, no vegetation growing on it. … All the nations will ask: “Why has the LORD done this to this land? Why this fierce, burning anger?” (Deuteronomy 29:22-24)

The answer will be:

“It is because this people abandoned the covenant of the LORD, the God of their ancestors, the covenant he made with them when he brought them out of Egypt….Therefore the LORD’s anger burned against this land, so that he brought on it all the curses written in this book. … the LORD uprooted them from their land and thrust them into another land, as it is now.” (Deuteronomy 29:25-28)

Did The Blessings and Curses happen?

The Blessings were delightful, and the Curses were dreadful, but the most important question we can ask is: ‘Did they happen?’  Much of the Old Testament of the Hebrew Vedas is the record of Israelite history so we know their past. Also we have historical records outside the Old Testament and many archeological monuments.  They all paint a consistent picture of Israelite or Jewish history.  This is given here through a timeline.  Read it and assess for yourself if the Curses of Moses came to pass.  This explains why Jewish groups migrated into India starting 2700 years ago (eg. Bnei Menashe of Mizoram).  They were scattered to India as a result of Assyrian and Babylonian conquests followed by mass deportations – exactly as Moses had warned.

The Conclusion to Moses’ Blessings and Curses

Moses’ final words did not end with Curses.  Here is how Moses made his final pronouncement.

When all these blessings and curses I have set before you come on you and you take them to heart wherever the LORD your God disperses you among the nations, and when you and your children return to the LORD your God and obey him with all your heart and with all your soul according to everything I command you today, then the LORD your God will restore your fortunes and have compassion on you and gather you again from all the nations where he scattered you. Even if you have been banished to the most distant land under the heavens, from there the LORD your God will gather you and bring you back. He will bring you to the land that belonged to your ancestors, and you will take possession of it. He will make you more prosperous and numerous than your ancestors (Deuteronomy 30:1-5)

After being exiled for thousands of years, in 1948 – within the lifetime of many alive today – the modern nation of Israel was re-born from a United Nations resolution and Jews started immigrating back to Israel from nations around the world – exactly as Moses’ predicted.  In India today, the thousand- year Jewish communities in Cochin, Andhra Pradesh and in Mizoram are dwindling rapidly as Jews depart to return to their ancestral land.  Only about 5000 Jews remain in India.  The Blessings of Moses are becoming fulfilled before our eyes, as certainly as the Curses shaped their history.

This has several implications for us.  First, the blessings & curses had their authority and power from God.  Moses was simply an enlightened messenger – a Rsi.  The fact that these curses and blessings reaches down thousands of years, across the nations of the globe, and affects billions of people (the return of Jews to Israel has created turmoil – regularly causing events making global headlines) – is evidence that this God has the power and authority that the Bible (Veda Pusthakan) says He has.  In the same Hebrew Vedas He also promised ‘that all peoples on earth’ would be blessed.  ‘All peoples on earth’ include you and me.  Again in the sacrifice of Abraham’s son, God reiterated that ‘all nations would be blessed’.  The striking location and details of that sacrifice help us know how to obtain this blessing.  The blessings being poured out now on the Jews returning from Mizoram, Andhra Pradesh and Kerala is a Sign that God wants to and can equally bless peoples in all the states of India and in the other nations around the world as He promised.  Like the Jews, we too are offered Blessings in the midst of our Curse.  Why not receive the gift of Blessing?