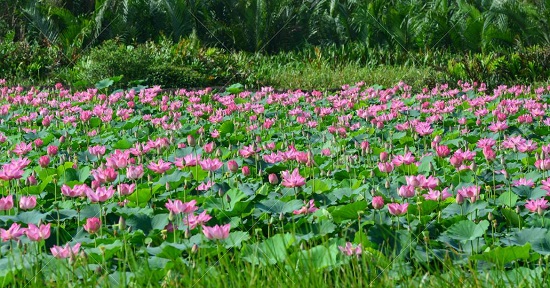 The lotus is South Asia’s iconic flower. The lotus flower was a prominent symbol in ancient history, remaining so today. Lotus plants possess a unique structure in their leaves which provide a self-cleaning ability, allowing the flowers to emerge from mud untarnished. This natural trait created symbolic references of the flower as rising out of the mud, untouched by filth. The Rgveda first mentions the lotus in a metaphor (RV 5.LXVIII.7-9) where it seems to describe a wish for the safe birth of a child.

When Vishnu was the dwarf Vamana, his consort Lakshmi appeared from a lotus in the great churning sea as Padma, or Kamala, both of which mean “Lotus”. Lakshmi maintains a close connection with the lotus, having her abode within the flowers themselves.

The Lotus and the Shankha are two of the eight Ashtamangala (auspicious signs) teaching tools. They serve as illustrations or symbols for timeless qualities or gunas. Numerous texts discuss the concept of gunas, innate natural forces that together transform and keep changing the world. The three gunas in Samkhya thinking are: sattva (goodness, constructive, harmonious), rajas (passion, active, confused), and tamas (darkness, destructive, chaotic). Nyaya and Vaisheshika schools of thought allow for more gunas. How about the Kingdom of God as a guna?

Parable of the Sower and the Four Soils

That same day Jesus went out of the house and sat by the lake. 2 Such large crowds gathered around him that he got into a boat and sat in it, while all the people stood on the shore. 3 Then he told them many things in parables, saying: “A farmer went out to sow his seed. 4 As he was scattering the seed, some fell along the path, and the birds came and ate it up. 5 Some fell on rocky places, where it did not have much soil. It sprang up quickly, because the soil was shallow. 6 But when the sun came up, the plants were scorched, and they withered because they had no root. 7 Other seed fell among thorns, which grew up and choked the plants. 8 Still other seed fell on good soil, where it produced a crop—a hundred, sixty or thirty times what was sown. 9 Whoever has ears, let them hear.”

What did this parable mean? We do not have to guess, since he gave the meaning to those who asked:

“Listen then to what the parable of the sower means: 19 When anyone hears the message about the kingdom and does not understand it, the evil one comes and snatches away what was sown in their heart. This is the seed sown along the path.

The seed falling on rocky ground refers to someone who hears the word and at once receives it with joy. 21 But since they have no root, they last only a short time. When trouble or persecution comes because of the word, they quickly fall away.

The seed falling among the thorns refers to someone who hears the word, but the worries of this life and the deceitfulness of wealth choke the word, making it unfruitful.

But the seed falling on good soil refers to someone who hears the word and understands it. This is the one who produces a crop, yielding a hundred, sixty or thirty times what was sown.

There are four responses to the message of God’s Kingdom. The first has no ‘understanding’ and so evil takes the message away from their hearts. The remaining three responses are all initially very positive and they receive the message with joy. But this message must grow in our hearts through difficult times. Mental acknowledgement without affecting our lives is insufficient. So two of these responses, though they initially received the message, did not allow it to grow in their heart. Only the fourth heart, who ‘hears the word and understands it’ would truly receive it in the way that God was looking for.

Jesus taught this parable so we would ask ourselves: ‘Which of these soils am I?’

The Parable of the Weeds

After explaining this parable Jesus taught a parable using weeds.

Jesus told them another parable: “The kingdom of heaven is like a man who sowed good seed in his field. 25 But while everyone was sleeping, his enemy came and sowed weeds among the wheat, and went away. 26 When the wheat sprouted and formed heads, then the weeds also appeared.

27 “The owner’s servants came to him and said, ‘Sir, didn’t you sow good seed in your field? Where then did the weeds come from?’

“The servants asked him, ‘Do you want us to go and pull them up?’

29 “‘No,’ he answered, ‘because while you are pulling the weeds, you may uproot the wheat with them. 30 Let both grow together until the harvest. At that time I will tell the harvesters: First collect the weeds and tie them in bundles to be burned; then gather the wheat and bring it into my barn.’”

Here he explains this parable.

Then he left the crowd and went into the house. His disciples came to him and said, “Explain to us the parable of the weeds in the field.”

40 “As the weeds are pulled up and burned in the fire, so it will be at the end of the age. 41 The Son of Man will send out his angels, and they will weed out of his kingdom everything that causes sin and all who do evil. 42 They will throw them into the blazing furnace, where there will be weeping and gnashing of teeth. 43 Then the righteous will shine like the sun in the kingdom of their Father. Whoever has ears, let them hear.

Parables of the Mustard Seed and the Yeast

Jesus also taught some very brief parables with illustrations from other common plants.

He told them another parable: “The kingdom of heaven is like a mustard seed, which a man took and planted in his field. 32 Though it is the smallest of all seeds, yet when it grows, it is the largest of garden plants and becomes a tree, so that the birds come and perch in its branches.”

33 He told them still another parable: “The kingdom of heaven is like yeast that a woman took and mixed into about sixty pounds of flour until it worked all through the dough.”

The Kingdom of God would start small and insignificant in this world but would grow throughout the world like yeast working through the dough and like a small seed growing into a large plant. It does not happen by force, or all at once, its growth is invisible but everywhere and unstoppable.

Parables of the Hidden Treasure and Pearl of Great Value

“The kingdom of heaven is like treasure hidden in a field. When a man found it, he hid it again, and then in his joy went and sold all he had and bought that field.

45 “Again, the kingdom of heaven is like a merchant looking for fine pearls. 46 When he found one of great value, he went away and sold everything he had and bought it.

These parables focus on the value of the Kingdom of God. Think of a treasure hidden in a field. Being hid everyone passing by the field thinks the field is of little value and thus they have no interest in it. But someone realizes there is a treasure there making the field very valuable – valuable enough to sell everything in order to buy it and obtain the treasure. So it is with the Kingdom of God – a value unnoticed by most, but the few that see its worth will gain great value.

The Parable of the Net

“Once again, the kingdom of heaven is like a net that was let down into the lake and caught all kinds of fish. 48 When it was full, the fishermen pulled it up on the shore. Then they sat down and collected the good fish in baskets, but threw the bad away. 49 This is how it will be at the end of the age. The angels will come and separate the wicked from the righteous 50 and throw them into the blazing furnace, where there will be weeping and gnashing of teeth.

The Kingdom of God grows mysteriously, like yeast in dough; with great value hidden from most; and it arouses diverse responses among people. It also separates people between those that understand and those that do not. After teaching these parables Jesus then asked his listeners this question.

“Have you understood all these things?” Jesus asked.

What about you? If the Kingdom of God is understood as a Guna moving through the world it still is of no benefit to you unless it can move through you too.  But how?

Jesus explains in his parable of Living Water like a Ganga Tirtha.