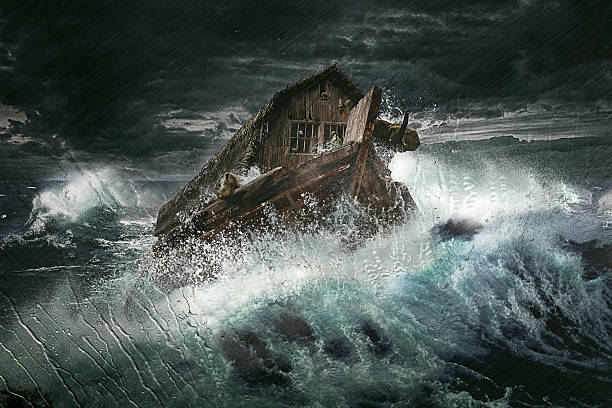 Previously we looked at the promise of Moksha given right at the very beginning of human history.  We also observed that there is something about us that tends to corruption, that shows up in our actions missing the target of intended moral behaviour, and even deeper into the very nature of our being. Our original image which was made by God (Prajapati) has been marred. Though we try hard with many rituals, washings and prayers, our corruption causes us to instinctively feel a need for cleansing that we cannot properly achieve. We often tire of continually having to fight this ‘uphill’ struggle of trying to live with perfect integrity.

If this corruption grows without any moral restraint things can quickly degenerate. This happened very early in human history. The early chapters of the Bible (Veda Pusthakam) tell us how this happened. This account is paralleled in the Shatapatha Brahmana which details how the ancestor of mankind today – known as Manu – survived a great judgment of a flood that came because of human corruption, and did so by seeking refuge in a great boat. Both the Bible (Veda Pusthakam) and the Sanskrit Vedas tell us that all mankind alive today descended from him.

Ancient Manu – where we get the English word ‘man’

The English word ‘man’ comes from early Germanic. Tacitus, a Roman Historian who lived around the time of Jesus Christ (Yeshu Satsang), wrote a book of the history of the German people called Germania. In it he says

In their old ballads (which are their history) they celebrate Tuisto, a God sprung from the earth, and Mannus his son, as the fathers and founders of the nation. To Mannus they assign three sons, after whose names so many people are called (Tacitus. Germania Ch 2, written ca 100 AD)

Scholars tell us that this ancient Germanic word ‘Mannus’ comes from the Proto-Indo-European “manuh” (cf. Sanskrit manuh, Avestan manu-,). So, the English word ‘Man’ is from Manu whom both the Bible (Veda Pusthakan) and the Shatapatha Brahmana say is our ancestor!  Let us look at this person by summarizing from the Shatapatha Brahmana. There are a few renditions that have slightly different aspects to the account, so I will describe the common points.

In the Vedas Manu was a righteous man, who sought truth. Because Manu was absolutely honest, he was initially known as Satyavrata (“One with the oath of truth”).

According to the Shatapatha Brahmana (click here to read in Shatapatha Brahmana), an avatar warned Manu of a coming flood. The avatar appeared initially as a Shaphari (a small fish) while he washed his hands in a river. The little Fish asked Manu to save Him, and out of compassion, he put it in a water jar. It kept growing bigger and bigger, until Manu put Him in a bigger pitcher, and then deposited Him in a well. When the well also proved insufficient for the ever-growing Fish, Manu placed Him in a tank (reservoir), that was two yojanas (25 km) in height above the surface and on land, as much in length, and a yojana (13 km) in breadth. As the Fish grew further Manu had to put it in a river, and when even the river proved insufficient he placed it in the ocean, after which it nearly filled the vast expanse of the great ocean.

It was then that the avatar informed Manu of an all-destructive flood which would come very soon. So Manu built a huge boat which housed his family, various seeds, and animals to repopulate the earth, for after the flood abated the oceans and seas would recede and the world would need to be repopulated with people and animals. During the flood Manu fastened the boat to the horn of a fish which was also an avatar. His boat ended up after the flood perched on the top of a mountain. He then descended from the mountain and offered sacrifices and oblations for his deliverance. All peoples on earth today descend from him.

The Account of Noah in the Bible (Veda Pusthakam)

The account in the Bible (Veda Pusthakam) describes the same event, but in this account Manu is called ‘Noah’. Click here to read the account of Noah and the global flood in detail from the Bible.  Along with the sanskrit Vedas and the Bible, memories of this event are preserved in many histories from different cultures, religions and histories.  The world is covered with sedimentary rock, which is formed during a flood so we have physical evidence of this flood as well as anthropological evidence. But what is the lesson for us today that we should pay attention to in this account?

When we ask whether God judges corruption (sin), and in particular whether our own sin will be judged or not, the response is often something like, “I am not too worried about Judgment because God is so merciful and kind I do not think He will really judge me”.  This account of Noah (or Manu) should cause us to re-think this. The entire world (apart from Noah and his family) was destroyed in that judgment. So where was His mercy then? It was provided in the ark.

God in His Mercy, provided an ark that was available for anybody. Anyone could have entered that ark and received mercy and safety from the coming flood. The problem was almost all people responded to the coming flood with disbelief. They mocked Noah and did not believe the coming Judgment would really happen. So they perished in the flood. Yet all they needed was to have entered the ark and they would have escaped the Judgment.

Those alive back then probably thought that they could avoid the flood by climbing to a higher hill, or by building a big raft. But they totally underestimated the size and power of the judgment. These ‘good ideas’ would not be sufficient for that judgment; they needed something that could cover them much better – the ark. While they all watched the ark being built it was a clear sign of both coming Judgment and available Mercy.  And in paying attention to the example of Noah (Manu) it speaks to us today in the same way, showing that mercy is attained through the provision that God has established, not by our own good ideas.

So why did Noah find the Mercy of God? You will notice that the Bible repeats several times the phrase

And Noah did all that the LORD commanded him

I find that I tend to do what I understand, or what I like, or what I agree with. I am sure that Noah must have had many questions in his mind about the warning of a coming flood and the command to build such a big ark on land. I am sure he could have reasoned that since he was a good and truth-seeking man he perhaps did not need to pay attention to building this ark. But he did ‘all‘ that was commanded – not just what he understood, not what he was comfortable with, and not even what made sense to him. This is a great example for us to follow.

The Door for salvation

The Bible also tells us that after Noah, his family, and the animals entered the ark that

It was God that controlled and managed the One Door into the ark – not Noah. When Judgment came and the waters rose, no amount of banging on the ark from the people outside could move Noah to open the door. God controlled that one door. But at the same time those on the inside could rest in confidence that since God controlled the door that no wind or wave could force it open. They were safe in the door of God’s care and Mercy.

Since God is unchanging this still applies to us today. The Bible warns that there is another coming Judgment – and this one by fire – but the sign of Noah assures us that along with His Judgment He also offers Mercy.  We should look for the ‘ark’ with one door that will cover our need and grant us Mercy.

The Bible also tells us that Noah:

built an altar to the LORD and, taking some of all the clean animals and clean birds, he sacrificed burnt offerings on it. (Genesis 8:20)

This fits the pattern of sacrifice of the Purusasukta. It is as if Noah (or Manu) knew that the sacrifice of Purusa would be given so he offered an animal sacrifice as a picture of this coming sacrifice demonstrating his trust that God would do it. In fact the Bible says that just after this sacrifice God ‘blessed Noah and his sons’ (Genesis 9:1) and ‘made a covenant with Noah’ (Genesis 9:8) to never again judge all people with a flood. So it seems that the sacrifice of an animal by Noah was crucial in his worship.

Re-birth – through Law or…

In the Vedic tradition, Manu is the source for the Manusmriti which advises or prescribes one’s varna/caste in life. The Yajurveda says that at birth, all humans are born shudras or servants, but that we need a second or new birth to escape this bondage. The Manusmriti is controversial and different points-of-view are expressed in it about smriti. It is beyond our scope to analyze all these details.  However, what is worth exploring, is that in the Bible, a Semitic people who descended from Noah/Manu also received two ways in which to obtain purity and cleansing. One way was through a law which included cleansings, ritual washings and sacrifices – very similar to the Manusmriti. The other way was much more mysterious, and it involved a death before achieving re-birth.  Jesus also taught about this.  He told a learned scholar in his day that

Jesus replied, “Very truly I tell you, no one can see the kingdom of God unless they are born again. (John 3:3)


We will look further at this in later articles.  But next we explore why there are such similarities between the Bible and Sanskrit Vedas.