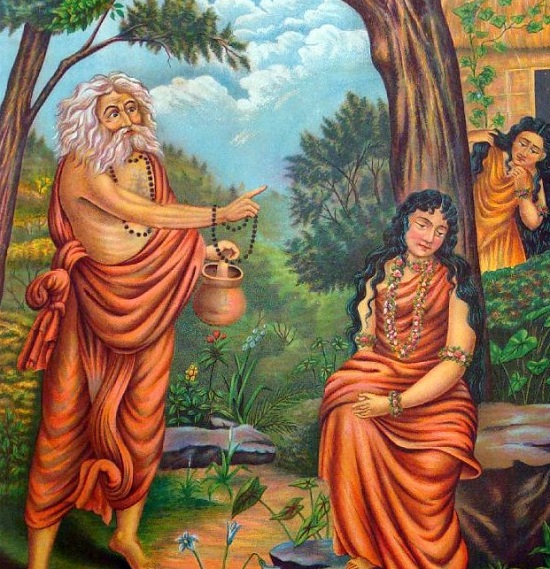 We read and hear about curses (Shaap) throughout mythology.  Perhaps the most well-known comes from the ancient playwright Kalidasa’s (ca. 400 CE) play Abhijnanasakuntalam (The Recognition of Shakuntala) which is still performed regularly.  In it, King Dushyanta meets and falls in love with a beautiful woman, Shakuntala, in the forest. Dushyanta quickly marries her but must soon must return to the capital for business and he departs, leaving her with his signet ring.  Shakuntala, deeply in love, daydreams about her new husband.

As she daydreamed a powerful sage, Durvasa, passed by becoming enraged because she did not notice and greet him properly. Therefore He cursed her to remain unrecognized by whomever she was daydreaming about. He then lessened the curse so that if she returned a gift given to her by that person they would remember her.  So Shakuntala journeyed to the capital with the ring, hoping that with it King Dushyanta would remember her.  But she lost the ring on the journey so the king did not recognize her when she arrived.

The Matsya Purana tells of the perpetual deva-asura wars, with devas always winning. Humiliated, Shukra Acharya, guru of the asuras, approached Siva for the mritasanjeevani stotra, or mantra to make asuras invincible, and so had his asuras take refuge at his father’s (Bhrigu) ashram. But with Shukra Acharya gone, the devas again attacked the asuras. However, the asuras obtained Bhrigu’s wife’s help, who rendered Indra immobile. Indra, in turn, appealed to Lord Vishnu to get rid of her. Vishnu obliged by severing her head with his sudarshana chakra. When Sage Bhrigu saw what had happened to his wife, he cursed Vishnu to be repeatedly born on earth, suffering the pains of worldly life. Hence, Vishnu had to incarnate multiple times.

Jesus uttered just such a curse on Day 3 of Holy Week.  First we review the week.

After Jesus entered Jerusalem as prophesied on Sunday and then shut down the Temple on Monday, the Jewish leaders planned to kill him.  But it would not be straight-forward.

God had selected Jesus as His Passover Lamb when Jesus entered the Temple on Nisan 10. The Hebrew Veda regulated what to do with the selected Passover lambs

…The animals you choose must be year-old males without defect, and you may take them from the sheep or the goats. 6 Take care of them until the fourteenth day of the month...

As the people cared for their Passover Lambs, so also God cared for His Passover Lamb and Jesus’ enemies could not get him (yet).  So the Gospel records what Jesus did the next day, Tuesday, Day 3 of that Week.

And he left them (Monday Day 2, Nisan 10) and went out of the city to where he spent the night.

Early in the morning (Tuesday Nisan 11, Day 3), as Jesus was on his way back to the city, he was hungry. Seeing a fig tree by the road, he went up to it but found nothing on it except leaves. Then he said to it, “May you never bear fruit again!” Immediately the tree withered.

Why did he do it?

What did it mean?

The meaning of the fig tree

The earlier prophets explain it to us.  Notice here how the Hebrew Vedas used the Fig Tree to picture Judgment on Israel:

Hosea went further, using the fig tree to picture and then curse Israel:

“When I first found Israel,
it was like finding grapes in the desert.
When I saw your people of long ago,
it was like seeing the early fruit on a fig tree.
But then they went to Baal Peor.
There they gave themselves to that shameful god named Baal.
They became as evil as the god they loved.

Ephraim is like a worthless plant.
Its roots are dried up.
It does not produce any fruit.
Suppose Ephraim’s people have children.
Then I will kill the children they love so much.”

17 My God will turn his back on his people.
They have not obeyed him.
So they will wander among other nations.

After cursing the fig tree, Jesus re-entered the Temple, teaching and debating.  The Gospel records it this way.

We know from history that this destruction of Jerusalem and its Temple, and the expulsion of the Jews into worldwide exile happened in 70 C.E.  Some of these exiles came to India.

With the Temple destruction in 70 CE Israel’s withering occurred and it remained withered for thousands of years.

This curse does not reside simply in the pages of the Gospel story.  We can verify it happened in history, impacting India’s history.  This Withering Curse pronounced by Jesus was powerful indeed.  The people in his day ignored him to their destruction.

The Curse will expire.

Jesus later clarified how that curse would come and how long it would last.

They (Jewish people) will fall by the sword and will be taken as prisoners to all the nations. Jerusalem will be trampled on by the Gentiles until the times of the Gentiles are fulfilled.

He taught that his curse (exile and Non-Jewish control over Jerusalem) would last only ‘until the times of the Gentiles (non-Jews) are fulfilled’, predicting that his Curse would expire.  He explained this further on Day 4.

This timeline shows the history of the Jewish people with details here.  Coming to our modern day, the timeline shows that the exile ends.  In 1948, from a UN declaration, the modern state of Israel was founded.  In the 1967 six-day war they regained the city of Jerusalem, now the capital of Israel.  We see the ‘times of the Gentiles’ ending from news reports.

The beginning and expiration of Jesus’ curse, uttered symbolically to the fig tree and then explained to his listeners have not remained just on the pages of the Gospel.  These events are verifiable, making news headlines today (ex., USA moved its embassy to Jerusalem).  Jesus taught profoundly, voiced ‘Om’ over nature, and now we see that he cursed, leaving its imprint on nations over thousands of years.  We ignore him at our peril.

The updated Passion Week chart shows Jesus cursing the fig tree on Day 3, Tuesday, while taken care of as God’s Selected Lamb.  On Day 4 he foretells His coming return, a Kalkin coming to set right many wrongs.