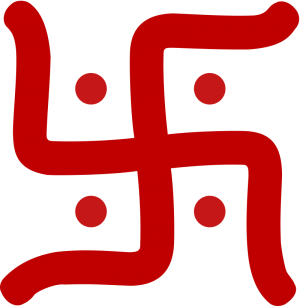 The word swasti is composed of:

Swasti is a benediction or blessing seeking the well-being of people and places. It is a declaration of faith in God and the soul. It is a standard, spiritual expression, used in social interactions and religious congregations to express one’s good intentions.

This benediction/blessing is also expressed through its visual symbol, the swastika.  The right-armed swastika (卐) has symbolized divinity and spirituality for millennia.  But it has held diverse meanings, and has had a checkered reputation following its co-option by the Nazis so it now arouses negative sentiment in the West compared to the traditionally positive sentiment across Asia.  It is these widely diverse perceptions of the swastika that make it such an appropriate symbol for Day 7 – the day after Good Friday.

The women who had come with Jesus from Galilee followed Joseph and saw the tomb and how his body was laid in it. 56 Then they went home and prepared spices and perfumes. But they rested on the Sabbath in obedience to the commandment.

The women wanted to embalm his body but time ran out and the Sabbath began at sundown Friday evening.  This started the 7th day of the week, the Sabbath. Jews cannot work on the Sabbath, going back to the Creation account.  After God had created everything in 6 days the Hebrew Vedas state:

Thus the heavens and the earth were completed in all their vast array.

The women, though wanting to embalm his body, followed their Vedas and rested.

But the chief priests continued their work on the Sabbath.

The next day, the one after Preparation Day, the chief priests and the Pharisees went to Pilate. 63 “Sir,” they said, “we remember that while he was still alive that deceiver said, ‘After three days I will rise again.’ 64 So give the order for the tomb to be made secure until the third day. Otherwise, his disciples may come and steal the body and tell the people that he has been raised from the dead. This last deception will be worse than the first.”

65 “Take a guard,” Pilate answered. “Go, make the tomb as secure as you know how.” 66 So they went and made the tomb secure by putting a seal on the stone and posting the guard.

So that Sabbath the chief priests worked, securing a guard for the tomb,  Jesus’ body rested in death, while the women rested in obedience.

Though to human observers it looked like Jesus had lost his battle, something occurred on this day in Hell (Naraka).  The Bible explains:

“When he ascended on high,
he took many captives
and gave gifts to his people.”

9 (What does “he ascended” mean except that he also descended to the lower, earthly regions? 10 He who descended is the very one who ascended higher than all the heavens, in order to fill the whole universe.)

Jesus descended to the lowest regions, what we call Naraka (hell) or Pitrloka where the Pitrs (dead ancestors) are captive by Yama (Yamaraja) and Yama-dutas.  Yama and Chitragupta (Dharmaraja) held captive the dead because they had the authority to judge their deeds and weigh their merit.  But the Gospel declares that Jesus, while his body rested in death on Day 7, still his Spirit descended and freed the captives there, then ascended with them.  As explained further…

And having disarmed the powers and authorities, he made a public spectacle of them, triumphing over them by the cross.

Jesus defeated the authorities in Naraka (Yama, Yama-dutas and Chitragupta) whom the Bible calls Satan (Slanderer), Devil (adversary), the Serpent (naga) and subordinate authorities.  The Spirit of Jesus descended to release those held captive by these authorities.

While Jesus was releasing these captives from Naraka, those on earth were unaware of it.  The living thought that Jesus had lost his battle with death.  This is the paradox of the cross.  The outcomes seem to point in different directions simultaneously.  Day 6 ended with the crushing loss of his death. But this turned into victory for the captives in Naraka.  The defeat of Day 6 was their victory on Day 7.  As the Swastika points in opposite directions simultaneously, the cross does likewise.

Reflecting on the Swastika as symbol

The intersection of the central arms of the swastika form a cross.  This is why the early followers of Jesus used the swastika as their symbol.

In addition, the bent arms on the edges point in all directions, symbolizing these paradoxes of the cross; both its defeat and victory, its cost and gain, humility and triumph, sadness and rejoicing, the body resting in death and the spirit working for freedom.  That day brought out many simultaneous opposites, as the swastika symbolizes so well.

The blessings of the cross continues to the four corners of earth; to the North, South, East and West, symbolized by the four directions that the bent arms point towards.

Nazi malevolence corrupted the auspiciousness of the swastika. Most Westerners no longer regard it positively. So the swastika itself symbolizes how other influences can corrupt and distort the purity of something auspicious.  Western imperialism and colonialism similarly hijacked the Gospel.  Originally an Asian message of Hope and Good News in the face of death, many Asians now see it as a vestige of European or Western culture.  As we implore the Westerner to see past the Nazi co-option of the Swastika to its deeper history and symbolism, the swastika is a reminder for us to do the same with the original gospel message found in the Bible’s pages.

…Pointing to the Next Day

But it is the bent lateral arms of the swastika that are especially significant for this Day 7 Sabbath.

Day 7 falls in-between the crucifixion and the Next Day. Correspondingly, the swastika’s lower lateral arm points back to Good Friday and its events.  The upper lateral arm points forward to the next day, Sunday of the new week, when Jesus defeats death on the day originally called First Fruits.