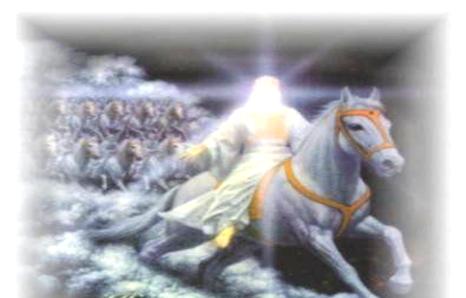 Jesus uttered a Curse on Day 3, dooming his nation to exile.  Jesus also predicted that his curse would expire, setting in motion events closing this age.  The disciples asked about this and Jesus explained, describing his return like that of Kalki (Kalkin).

Jesus left the temple and was walking away when his disciples came up to him to call his attention to its buildings. 2 “Do you see all these things?” he asked. “Truly I tell you, not one stone here will be left on another; every one will be thrown down.”

3 As Jesus was sitting on the Mount of Olives, the disciples came to him privately. “Tell us,” they said, “when will this happen, and what will be the sign of your coming and of the end of the age?”

He started by giving details of His Curse. Then in the evening he left the Temple going to the Mount of Olives outside Jerusalem (i).  Since the Jewish day began at sunset, it was now Day 4 of the Week when he described his return.

The Garuda Purana describes Kalki as the final incarnation of the Dashavatara (ten primary avatars/incarnations) of Vishnu. Kalki will come at the end of Kali Yuga, the current yuga. The Puranas state that right before Kalki’s appearance the world will degenerate, losing dharma. People will engage in unnatural sexual relations, become fond of nudity and unrighteous conduct, with various natural disasters and plagues occurring. At this point, Kalki, the avatar wielding a fiery sword and riding a horse, will appear. Kalki will destroy the earth’s wicked inhabitants and usher in a new age, bringing the world back to Satya Yuga.

However, Wikipedia states that the Vedas do not mentioned Kalki/Kalkin. He appears first only in the Mahabharata as an extension of Parasurama, the 6th Dashavatara Avatar.  In this Mahabharata version, Kalki only destroys evil rulers but does not bring about renewal to Satya Yuga.  Scholars suggest the development of a Kalki archetype sometime in the 7 – 9th century CE.

The development of Kalki and similar personas in other traditions (Maitreya in Buddhism, Mahdi in Islam, the Sikh Mahdi Meer) shows our instinctive sense that something is wrong with the world. We want someone to come and set it right.  We desire that He depose evil oppressors, remove corruption, and uplift dharma.  But we forget that not only must He remove evil ‘out there’ but also cleanse our corruption within.  Long before other sacred texts expressed this longing for someone to come and defeat evil, Jesus taught how he would go about this two-part task. He cleans our internal corruption at his first coming, dealing with government and social adharma at his Second Coming.  Jesus anticipated his Second Coming on Day 4 of this week, describing the Signs of his return.

Day 4 – Signs of his Return

Jesus answered: “Watch out that no one deceives you. 5 For many will come in my name, claiming, ‘I am the Messiah,’ and will deceive many. 6 You will hear of wars and rumors of wars, but see to it that you are not alarmed. Such things must happen, but the end is still to come. 7 Nation will rise against nation, and kingdom against kingdom. There will be famines and earthquakes in various places. 8 All these are the beginning of birth pains.

9 “Then you will be handed over to be persecuted and put to death, and you will be hated by all nations because of me. 10 At that time many will turn away from the faith and will betray and hate each other, 11 and many false prophets will appear and deceive many people. 12 Because of the increase of wickedness, the love of most will grow cold, 13 but the one who stands firm to the end will be saved. 14 And this gospel of the kingdom will be preached in the whole world as a testimony to all nations, and then the end will come.

15 “So when you see standing in the holy place ‘the abomination that causes desolation,’[a] spoken of through the prophet Daniel—let the reader understand— 16 then let those who are in Judea flee to the mountains. 17 Let no one on the housetop go down to take anything out of the house. 18 Let no one in the field go back to get their cloak. 19 How dreadful it will be in those days for pregnant women and nursing mothers! 20 Pray that your flight will not take place in winter or on the Sabbath. 21 For then there will be great distress, unequaled from the beginning of the world until now—and never to be equaled again.

22 “If those days had not been cut short, no one would survive, but for the sake of the elect those days will be shortened. 23 At that time if anyone says to you, ‘Look, here is the Messiah!’ or, ‘There he is!’ do not believe it. 24 For false messiahs and false prophets will appear and perform great signs and wonders to deceive, if possible, even the elect. 25 See, I have told you ahead of time.

26 “So if anyone tells you, ‘There he is, out in the wilderness,’ do not go out; or, ‘Here he is, in the inner rooms,’ do not believe it. 27 For as lightning that comes from the east is visible even in the west, so will be the coming of the Son of Man. 28 Wherever there is a carcass, there the vultures will gather.

29 “Immediately after the distress of those days

“‘the sun will be darkened,
and the moon will not give its light;
the stars will fall from the sky,
and the heavenly bodies will be shaken.’[b]

30 “Then will appear the sign of the Son of Man in heaven. And then all the peoples of the earth[c] will mourn when they see the Son of Man coming on the clouds of heaven, with power and great glory.[d] 31 And he will send his angels with a loud trumpet call, and they will gather his elect from the four winds, from one end of the heavens to the other.

On Day 4 Jesus looked past the coming destruction of the Temple.  He taught that growing evil, earthquakes, famines, wars, and persecutions would characterize the world before his return.  Even so, he predicted that the Gospel would still be announced across the whole world (v 14).  As the world learned about the Christ there would grow numbers of false teachers and pseudo claims about him and his return.  Indisputable cosmic disturbances would be the true sign of his return in the midst of wars, chaos and distress.  He will snuff out the light from the stars, sun and moon.

John later described his return, picturing it like Kalki:

I saw heaven standing open and there before me was a white horse, whose rider is called Faithful and True. With justice he judges and wages war. 12 His eyes are like blazing fire, and on his head are many crowns. He has a name written on him that no one knows but he himself. 13 He is dressed in a robe dipped in blood, and his name is the Word of God. 14 The armies of heaven were following him, riding on white horses and dressed in fine linen, white and clean. 15 Coming out of his mouth is a sharp sword with which to strike down the nations. “He will rule them with an iron scepter.”[a] He treads the winepress of the fury of the wrath of God Almighty. 16 On his robe and on his thigh he has this name written:

king of kings and lord of lords.

17 And I saw an angel standing in the sun, who cried in a loud voice to all the birds flying in midair, “Come, gather together for the great supper of God, 18 so that you may eat the flesh of kings, generals, and the mighty, of horses and their riders, and the flesh of all people, free and slave, great and small.”

19 Then I saw the beast and the kings of the earth and their armies gathered together to wage war against the rider on the horse and his army. 20 But the beast was captured, and with it the false prophet who had performed the signs on its behalf. With these signs he had deluded those who had received the mark of the beast and worshiped its image. The two of them were thrown alive into the fiery lake of burning sulfur. 21 The rest were killed with the sword coming out of the mouth of the rider on the horse, and all the birds gorged themselves on their flesh.

We can see that war, distress and earthquakes are increasing – so the time of his return is getting closer.  But there are still no disturbances in the heavens so his return is not just yet.

How close are we?

To answer this Jesus continued

“Now learn this lesson from the fig tree: As soon as its twigs get tender and its leaves come out, you know that summer is near. 33 Even so, when you see all these things, you know that it[e] is near, right at the door. 34 Truly I tell you, this generation will certainly not pass away until all these things have happened. 35 Heaven and earth will pass away, but my words will never pass away.

The Fig Tree greening up before our eyes

Remember the fig tree, symbolic of Israel, which he had cursed on Day 3?  The withering of Israel began in 70CE when the Romans destroyed the Temple and it remained withered for 1900 years.   Jesus told us to look for shoots of green coming out from the fig tree to know when His return was ‘near’.  In the last 70 years we have witnessed this ‘fig tree’ beginning to green and sprout leaves again. Yes, this has added to the wars, distress and troubles in our times, but this should not surprise us since he warned about this.

Therefore, we should exercise care and watchfulness in our times since he warned against carelessness and indifference regarding his return.

42 “Therefore keep watch, because you do not know on what day your Lord will come. 43 But understand this: If the owner of the house had known at what time of night the thief was coming, he would have kept watch and would not have let his house be broken into. 44 So you also must be ready, because the Son of Man will come at an hour when you do not expect him.

45 “Who then is the faithful and wise servant, whom the master has put in charge of the servants in his household to give them their food at the proper time? 46 It will be good for that servant whose master finds him doing so when he returns. 47 Truly I tell you, he will put him in charge of all his possessions. 48 But suppose that servant is wicked and says to himself, ‘My master is staying away a long time,’ 49 and he then begins to beat his fellow servants and to eat and drink with drunkards. 50 The master of that servant will come on a day when he does not expect him and at an hour he is not aware of. 51 He will cut him to pieces and assign him a place with the hypocrites, where there will be weeping and gnashing of teeth.

On Wednesday, Day 4 of Passion Week, Jesus described the signs of his return – climaxing with the darkening of all the heavenly bodies.

He warned all of us to carefully watch for his return.  Since we can now see the fig tree greening, we should take heed.

The Gospel records how His Enemy moved against him on Day 5, next.

[i] Describing each day that week, Luke explains:  “Each day Jesus was teaching at the temple, and each evening he went out to spend the night on the hill called the Mount of Olives,” (Luke21:37)