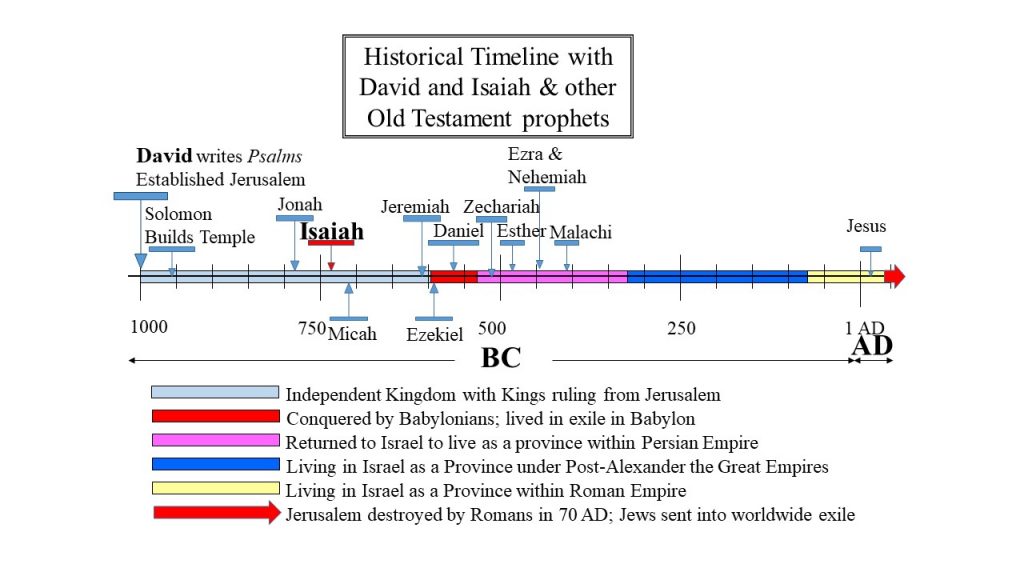 The Bhagavad Gita is the wisdom centerpiece of the Mahabharata epic.  Though written as a Gita (song) today it is usually read.  The Gita narrates a conversation between Lord Krishna and the royal warrior Arjuna just before the great battle at Kurukshetra – the war between two sides of the royal family. Opposing each other in this impending war were arrayed the warriors and rulers of the two branches of the dynasty of King Kuru, the founder of the ancient royal dynasty. The Pandava and the Kaurava cousins were going to war over which side of the dynasty had the right to rule – the Pandava King Yudhisthira or the Kaurava King Duryodhana.  Duryodhana had usurped the throne from Yudhisthira so Yudhisthira and his Pandava allies were going to war to get it back. The Bhagavad Gita conversation between Pandava warrior Arjuna and Lord Krishna focuses on true wisdom in difficult situations yielding spiritual freedom and blessing.

The Psalms are the centerpiece of wisdom literature of the Hebrew Veda Pusthakan epic.  Though written as songs (gitas) today they are usually read.  Psalm Two narrates a conversation between the High LORD and His Anointed (=Ruler) just before a great battle between two opposing forces.  On the two sides of this impending war are arrayed great warriors and rulers.  On the one side is a king who is a descendant of the ancestral King David, founder of an ancient royal dynasty.  The two sides were going to war over which side had the right to rule.  The Psalm 2 conversation between the LORD and His ruler touches on freedom, wisdom and blessing.

Who was King David and what are the Psalms?

You can see from the timeline taken from History of Israelites, that David lived about 1000 BC, a thousand years after Sri Abraham and 500 years after Sri Moses. David started out as a shepherd tending his family’s sheep. A great enemy, and giant of a man, named Goliath led an army to conquer the Israelites, and so the Israelites were discouraged and defeated. David challenged Goliath and killed him in battle. This remarkable victory of a young shepherd boy over a great warrior made David famous.

However, he became King only after long and difficult experiences because he had many enemies, both abroad and among the Israelites, who opposed him. David ultimately triumphed over all his enemies because he trusted in God and God helped him.  Several books in the Hebrew Vedas recount these struggles and victories of David.

David was also famous as a musician who composed beautiful songs and poems to God. These songs and poems were inspired by God and form the book of Psalms in the Veda Pusthakan.

Prophecies of ‘The Christ’ in the Psalms

Though a great king and warrior, David wrote in the Psalms of a ‘Christ’ coming from his royal line who would eclipse him in power and authority.  Here is how the Christ is introduced in Psalm 2 of the Hebrew Vedas, casting a royal battle scene similar to the Bhagavad Gita.

Why do the nations conspire
and the peoples plot in vain?
2 The kings of the earth rise up
and the rulers band together
against the LORD and against his Anointed, saying,
3 “Let us break their chains
and throw off their shackles.”

4 The One enthroned in heaven laughs;
the Lord scoffs at them.
5 He rebukes them in his anger
and terrifies them in his wrath, saying,
6 “I have installed my king
on Zion, my holy mountain.”

7 I will proclaim the Lord’s decree:

He said to me, “You are my son;
today I have become your father.
8 Ask me,
and I will make the nations your inheritance,
the ends of the earth your possession.
9 You will break them with a rod of iron;
you will dash them to pieces like pottery.”

10 Therefore, you kings, be wise;
be warned, you rulers of the earth.
11 Serve the Lord with fear
and celebrate his rule with trembling.
12 Kiss his son, or he will be angry
and your way will lead to your destruction,
for his wrath can flare up in a moment.
Blessed are all who take refuge in him.

Here is the same passage but from Greek as explained previously.

Why do the nations conspire
and the peoples plot in vain?
2 The kings of the earth rise up
and the rulers band together
against the Lord and against his Christ, saying,
…

As you can see, the context of ‘Christ’/’Anointed‘ in Psalm 2 is very similar to the Kurukshetra War in the Bhagavad Gita.  But some differences emerge when we think of the aftermath of the Kurukshetra War fought so long ago.  Arjuna and the Pandavas won the war, and so there was a shifting of power and rule from the usurping Kauravas to the Pandavas, making Yudhistira the rightful king.  All five Pandava brothers and Krishna survived the 18 day battle, with only a handful of others surviving – everyone else was slain. But after ruling for only 36 years after the war, Yudhistira renounced the throne, passing the title on to Arjuna’s grandson, Parikshit. He then left for the Himalayas with Draupadi and his brothers. Draupadi and four Pandavas—Bhima, Arjuna, Nakula and Sahadeva died during the journey. Yudhistira himself was granted entrance to heaven.  Gandhari, mother of the Kauravas, was furious with Krishna for not stopping the war, so she cursed him and he was killed 36 years after the war when accidentally shot by an arrow because of an inter-clan fight.  The Kurukshetra War and the subsequent killing of Krishna moved the world into Kali Yuga.

So what gain has passed down to us from the Kurukshetra War?

Fruits for us from Kurukshetra War

For us, living thousands of years later, we find ourselves in greater need.  We live in samsara, constantly living in the shadow of pain, disease, aging and death.  We live under governments that are usually corrupt and help the rich and personal friends of the rulers.  We feel the effects of Kali Yuga in so many ways.

We yearn for a government that will not foster corruption, for a society that is not under Kali Yuga, and for personal deliverance from never-ending sin and death in samsara.

Fruits for us from coming ‘Christ’ of Psalm 2

The Hebrew Rsis explain how ‘the Christ’ introduced in Psalm 2 will meet these needs of ours. It will require a war to meet these needs, but a different war than the Kurukshetra and different even than the war pictured in Psalm 2. It is a war that only ‘the Christ’ can wage. These prophets show that rather than begin by power and might, the Christ starts by serving us in our need for deliverance from sin and death. They show how the road to Psalm 2, which will one day be reached, needed first to take a long detour to another battle to defeat another usurper, not by military might, but by love and sacrifice for those who are captive to samsara.  We begin this journey with the shoot from the dead stump of the royal tree of David.