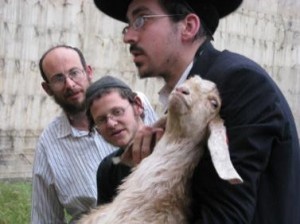 Sages and rsis through the ages have known that people live in illusion and sin.  This has resulted in people of all religions, ages and education levels having an instinctive awareness that they need to be ‘cleansed’.  This is why so many participate in the Kumbh Mela Festival and why before doing pujas people say the Prartha Snana (or Pratasana) mantram (“I am a sinner. I am the result of sin.  I am born in sin.  My soul is under sin.  I am the worst of sinners.  O Lord who has the beautiful eyes,  Save me, O Lord of the Sacrifice.“).  Hand-in-hand with this instinctive need for cleansing is a sense of need to give a sacrifice to ‘pay’ in some way for our sins or the darkness (Tamas) of our lives.  And once again in the sacrifice of the pujas, or in the Kumbh Mela and other Festivals people give sacrifice of time, money, asceticism in order to meet this instinctive need to give sacrifice.  I have heard of people taking a cow and holding it by the tail as it swims across the river.  This is done as a puja or sacrifice in order to earn forgiveness.

This need to give sacrifice has been around as long as the oldest religious texts have been around. And these texts affirm what our instincts tell us – that sacrifice is very important and must be given.  For example consider the following teachings:

“I indeed know that fire sacrifice leads to heaven and is the way to attain heaven” Kathopanisad 1.14

The book of the Hindus says:

“It is through sacrifice that man reaches heaven” Sathapatha Brahmana VIII.6.1.10

“by means of sacrifice, not only men but gods acquire immortality” Sathapatha Brahmana II.2.2.8-14

So it is through sacrifice that we gain immortality and heaven (Moksha).  But the question still remains as to what kind of sacrifice and how much is sufficient to meet the need to make a ‘payment’ or earn enough merit against our sins/tamas?  Will 5 years of asceticism be sufficient?  Will giving money to the poor be a sufficient sacrifice?  And if so, how much?

In the very earliest Veda texts, the God who was Lord of all Creation – the one who made and controlled the universe – was called Prajapati.  It is through Prajapati that everything else came into being.

The earliest Hebrew texts of the Veda Pusthakam (Bible) is known as the Torah. The Torah was written approximately 1500 BC, around the time that the Rg Veda was composed. The Torah begins with the declaration that there is a living God who is the Creator of the whole universe. In the transliteration from the original Hebrew this God was called either Elohim or Yahweh and they are interchanged back and forth throughout in these Hebrew texts. Thus, like Prajapati in the Rg Veda, Yahweh, or Elohim, in the Torah was (and is) Lord of all Creation.

Early In the Torah, Yahweh also reveals Himself as the God ‘who Provides’ in a remarkable encounter with the Rsi called Abraham.  I was struck with the similarity between Yahweh who provides (transliterated from Hebrew as Yahweh-yireh) with that of Prajapati in Rg Veda who is “the protector or supporter of creatures”.

In what way does Yahweh provide? We have already noted the instinctive need for people to give sacrifice, but without assurance that the sacrifice that we bring is sufficient. What is so interesting is that in this very specific area of our need the Tandyamaha Brahmana declares how Prajapati provides for our need. It says:

“Having made a self-sacrifice Prajapati (the Lord of all Creation) offered himself for the gods” Tandyamaha Brahmana, chapter 7 of 2nd khanda.

“The actual sacrifice is Prajapati Himself” [Sanskrit: ‘Pajapatir yajnah’]

Sanskrit scholar H. Aguilar comments on this by translating from Sathapatha Brahmana the following:

The Vedas from the earliest time declares that Yahweh or Prajapati recognized the need we had so He provided for us in a self-sacrifice. How He did it we look at in later articles as we concentrate on the Purusa-Prajapati sacrifice of the Purusasukta in Rg Veda, but for now just think how important this is. The Svetasvataropanisad says

If you are interested in eternal life, if you desire Moksha or enlightenment then it would be wise to journey along to see what has been revealed about how and why Prajapati (or Yahweh) provided for us through self-sacrifice so that we can gain heaven.  And the Vedas do not leave us hanging.  In Rg Veda is the Purusasukta which describes the incarnation of Prajapati and the sacrifice He made for us.  Here we introduce the  Purusasukta which describes Purusa like the Bible (Veda Pusthakam) describes Yeshu Satsang (Jesus of Nazareth) and his sacrifice to bring us Moksha or Mukti (immortality).  Here we look directly at the sacrifice of Jesus (YEshu Satsang) and his gift to us.

22 thoughts on “The universal need for sacrifice”