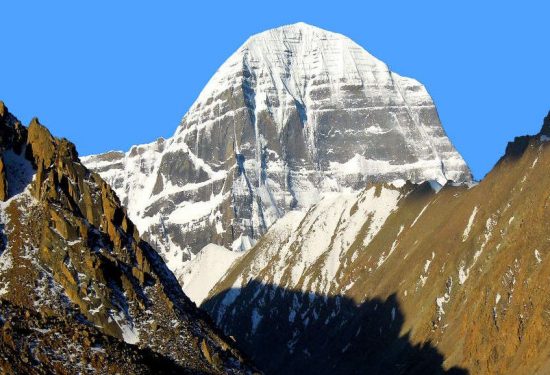 Mount Kailash (or Kailasa) is a mountain just across the border from India in the Tibetan region of China.  Hindus, Buddhists and Jains regard Mount Kailash as a sacred mountain.  For Hindus, Mount Kailash is considered the abode of Lord Shiva (or Mahadeva), along with his consort, the goddess Parvati (also known as Uma, Gauri), and their offspring Lord Ganesh (Ganapati or Vinayaka).  Thousands of Hindus and Jains make pilgrimage to Mount Kailash to walk around it in holy ritual and receive the blessing it offers.

Kailash is where Lord Shiva killed Ganesh by taking off his head when Ganesh stopped him from seeing Parvati while she was bathing.  Thus continues the well-known story of how Ganesh was returned to Shiva from death when an elephant head was placed on his torso.  The elephant died in giving his head sacrificially to Ganesh so Lord Shiva could receive his son back from death.  This sacrifice happened on Kailash, making it the sacred mountain it is today.  Some even consider that Kailash is the physical manifestation of Mount Meru – the spiritual and metaphysical center of the universe.  Many temples are built with concentric circles as signs representing this spirituality centered from Mount Meru through Mount Kailash.

This manifestation of God through sacrifice on a mountain bringing a son back from death is also the pattern experienced by Sri Abraham on another mountain – Mount Moriah – with his son.  That sacrifice was also a sign pointing to a deeper metaphysical reality in the coming incarnation of Yeshu Satsang – Jesus.  The Hebrew Vedas continue recounting for us the experiences of Sri Abraham 4000 years ago and explain its importance.  It declares that understanding of this sign will result in blessing to ‘all nations’ – not only the Hebrews.  So it is worthwhile to learn the story and understand its significance.

We saw how Abraham was, so long ago, given a promise of nations. Jews and Arabs today come from Abraham, so we know the promise came true and that he is playing an important part in history.  Because Abraham trusted this promise he was given righteousness – he achieved moksha not through rigorous merit but he received it as a free gift.

Sometime after, Abraham did receive that long awaited son, Isaac (from whom the Jews today trace their ancestry).  Isaac grew into a young man.  But then God tested Abraham in a dramatic way.  You can read the complete account here and we will go over the key details to unlock the meaning of this mysterious test – to help us understand how righteousness will be paid for.

This test started with a dire command:

Then God said, “Take your son, your only son, whom you love—Isaac—and go to the region of Moriah. Sacrifice him there as a burnt offering on a mountain I will show you.” (Genesis 22:2)


Abraham, in obedience to the command ‘got up early next morning’ and ‘after three days travel’ they reached the mountain.  Then

9 When they reached the place God had told him about, Abraham built an altar there and arranged the wood on it. He bound his son Isaac and laid him on the altar, on top of the wood. 10 Then he reached out his hand and took the knife to slay his son. (Genesis 22:9-10)

Abraham moved to obey the command.  But then something remarkable happened:

11 But the angel of the Lord called out to him from heaven, “Abraham! Abraham!”

12 “Do not lay a hand on the boy,” he said. “Do not do anything to him. Now I know that you fear God, because you have not withheld from me your son, your only son.”

13 Abraham looked up and there in a thicket he saw a ram caught by its horns. He went over and took the ram and sacrificed it as a burnt offering instead of his son.  (Genesis 22:11-13)

At the last moment Isaac was saved from death and Abraham saw a male sheep and sacrificed it instead.  God had provided a ram and the ram took the place of Isaac.

The Sacrifice: looking to the future

Abraham then names that place.  Notice what he names it.

So Abraham called that place ‘The LORD Will Provide’. And to this day it is said, “On the mountain of the LORD it will be provided.” (Genesis 22:14)

Abraham named it ‘The LORD will provide’. Here is a question.  Is that name in the past tense, present tense or future tense? It is clearly in the future tense. To remove all doubt the comment which follows repeats “…it will be provided”. This is again in the future tense – thus also looking to the future. But this naming occurred after the sacrifice of the ram (a male sheep) in place of Isaac.  Many think that Abraham, when naming that place, was referring to that ram caught in the thicket and sacrificed in place of his son. But it was already sacrificed and burned at this point. If Abraham was thinking of the ram – already dead, sacrificed and burnt – he would have named the place ‘The LORD has provided’, i.e. in the past tense. And the comment would have stated ‘And to this day it is said “On the mountain of the LORD it was provided”’. But Abraham clearly named it in future tense and therefore was not thinking of that already dead and sacrificed ram. He was enlightened to something different. He had insight into something about the future. But what?

Where the sacrifice happened

Remember that the mountain where Abraham had been directed for this sacrifice was:

This happened in ‘Moriah’. Where is that? Though it was a wilderness area in Abraham’s day (2000 BC), a thousand years later (1000 BC) King David established the city of Jerusalem there, and his son Solomon built the First Temple there. We read later in the Old Testament historical books that:

Then Solomon began to build the temple of the LORD in Jerusalem on Mount Moriah, where the LORD had appeared to his father David (2 Chronicles 3:1)

In other words, ‘Mount Moriah’ in the early Old Testament time of Abraham (4000 BC) was an isolated mountain top in the wilderness but 1000 years later through David and Solomon it became the central city of the Israelites where they built the Temple to the Creator. To this very day it is a holy place for the Jewish people and the capital of Israel.

Jesus – Yeshu Satsang – and the Sacrifice of Abraham

Think now about the titles of Jesus in the New Testament.  Jesus had many titles associated with him. Perhaps the most well-known title is ‘Christ’. But he had another title given to him that is also important. We see this in the Gospel of John when John the Baptist says of him:

The next day John (i.e. John the Baptist) saw Jesus (i.e. Yeshu Satsang) coming toward him and said, “Look, the Lamb of God, who takes away the sin of the world. This is the one I meant when I said ‘A man who comes after me has surpassed me because he was before me’”. (John 1:29-30)

In other words, Jesus was known as ‘The Lamb of God’. Now consider the end of Jesus’ life. Where was he arrested and crucified? It was in Jerusalem (which as we saw = ‘Mount Moriah’). It is very clearly stated during his arrest that:

When he [Pilate] learned that Jesus was under Herod’s jurisdiction he sent him to Herod, who was also in Jerusalem at the time.’ (Luke 23:7)

The arrest, trial and crucifixion of Jesus happened in Jerusalem (= Mount Moriah). The timeline shows the events that have happened at Mount Moriah.

Now think back to Abraham. Why did he name that place in the future tense ‘The LORD will provide’? How could he know that something would be ‘provided’ there in his future that would so precisely mirror what he enacted on Mount Moriah? Think about it – in his test Isaac (his son) was saved from death at the last moment because a lamb was sacrificed in his place. Two thousand years later, Jesus is called ‘Lamb of God’ and is sacrificed on the same spot!  How did Abraham know this would be ‘the spot’? He could only have known and been able to predict something that remarkable if he had received enlightenment from Prajapati, from the Creator God himself.

A Divine Mind is Revealed

It is as though there is a Mind that connected these two events by location even as they are separated by 2000 years of history.

The figure illustrates how the earlier event (Abraham’s sacrifice) alludes to the later one (Jesus’ sacrifice) and was configured to remind us of this later event. This is evidence that this Mind (Creator God) is revealing Himself to us by coordinating events though separated by thousands of years. It is a Sign that God spoke through Abraham.

Good News for you and me

This account is also important to us for more personal reasons. To conclude, God declared to Abraham that

“…and through your offspring all nations on earth will be blessed because you have obeyed me” (Genesis 22:18)

You belong to one of ‘all nations on earth’ – no matter what your language, religion, education, age, gender, or wealth!  Then this is a promise that is given specifically to you. Notice what the promise is – a ‘blessing’ from God himself! This was not something solely for the Jews, but for people all over the world.

How is this ‘blessing’ given? The word ‘offspring’ here is in the singular. It is not ‘offsprings’ as in many descendants or peoples, but in the singular as in a ‘he’.  It is not through many people or a group of people as in ‘they’. This follows exactly the Promise given at the beginning of history when a ‘he’ would ‘strike the heel’ of the serpent as recorded in the Hebrew Vedas and also parallels the promise of the sacrifice of Purusa (a ‘he’) given in the Purusasukta. With this Sign the very place – Mount Moriah ( = Jerusalem) – is predicted giving further detail to these ancient promises. The details of the drama of Abraham’s sacrifice help us understand how this blessing is given, and how the price for righteousness would be paid.

How is the Blessing of God obtained?

Just like the ram saved Isaac from death by being sacrificed in his place, so the Lamb of God, by his sacrificial death, saves us from the power and penalty of death.  The Bible declares that

This is another way of saying that the sins we do produce a karma that results in death.  But death was paid by the lamb substituting for Isaac. Abraham and Isaac simply had to accept it. He did not and could not merit it. But he could receive it as a gift.  This is exactly how he achieved moksha.

This shows the pattern we can follow.  Jesus was the ‘Lamb of God who takes away the sin of the world’.  This includes your own sin.  So Jesus, the Lamb, offers to ‘take away’ your sins since he made the payment.  You cannot merit this but you can receive it as a gift.  Call to Jesus, the Purusa, and ask him to take away your sins.  His sacrifice gives him that power.  We know this because it was foreshadowed beyond that of chance coincidences in the remarkable account of the sacrifice of Abraham’s son on Mount Moriah, the same spot where 2000 years later it ‘was provided’ by Jesus.

This is followed by foretelling when this would happen in the Sign of the Passover Festival.