The Bible imparts spiritual truth by recording how God has acted in history. It starts at the beginning when God created mankind in His image and then confronted the first humans and spoke of a specific ‘he’ who was to come and be sacrificed. This was followed up by the specific event of the sacrifice of a ram in place of Rsi Abraham’s son and the historical event of Passover. This parallels the ancient Rg Vedas where sacrifice for our sin is required and the promise  given that this would occur with the sacrifice of the Purusa.  These promises were fulfilled in the life, teachings, death & resurrection of the Lord Jesus Christ (Yeshu Satsang).  But the promises and their fulfillments are historical.  Therefore, for the Bible to be trustworthy in imparting spiritual truth it must also be historically reliable. This leads us to our question: Is the Bible historically reliable? And how does someone know if it is or is not?

We start by asking  whether the text (the words) of the Bible has changed over time or not.  Known as textual reliability, the question arises because the Bible is so ancient.  There are many books which make up the Bible, and the last books were written down almost two thousand years ago.  For most of the intervening centuries there has been no printing press, photocopy machines or publishing companies. So these books were copied by hand, generation after generation, as languages died out and new ones arose, as empires changed and new powers came to be. Since the original manuscripts have long ago disappeared, how do we know that what we read today in the Bible is what the original authors actually wrote long ago?  Is there any ‘scientific’ way to know whether what we read today is different or the same from the original writings of long ago?

This question is true of any ancient writing. The figure below illustrates the process by which all writings from the ancient past are preserved over time so we can read them today. The figure shows an example of an ancient document written at 500 BC (this date being chosen solely as an example). 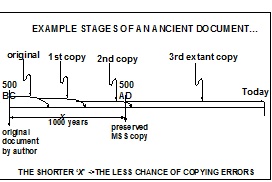 The original does not last indefinitely, so before it decays, is lost, or destroyed, a manuscript (MSS) copy of it is made (1st copy). A professional class of people called scribes did the copying work. As the years advance, copies are made of the copy (2nd copy & 3rd copy). At some point a copy is preserved that is still in existence today (3rd copy). In our example diagram this existing copy was copied in 500 AD. This means that the earliest that we can know of the state of the text of the document is only from 500 AD and later since all the earlier manuscripts have disappeared.  The 1000 year period from 500 BC to 500 AD (labeled x in the diagram) is the period where we cannot check copies since all manuscripts from this period are gone. For example, if copying errors (intentional or otherwise) were made when the 2nd copy was made from the 1st copy, we would not be able to detect them since neither of these documents are now available to compare against each other. This time period before the origin of currently existing copies (the period x) is thus the interval of textual uncertainty. Consequently, a principle that answers our question about textual reliability is that the shorter this interval x is the more confidence we can place in the accurate preservation of the document to our modern day, since the period of uncertainty is reduced.

Of course, usually more than one manuscript copy of a document is in existence today. Suppose we have two such manuscript copies and in the same section of each of them we find the following phrase (I have it in English for the sake of the example, the real manuscript would be in an ancient language like Greek, Latin or Sanskrit): 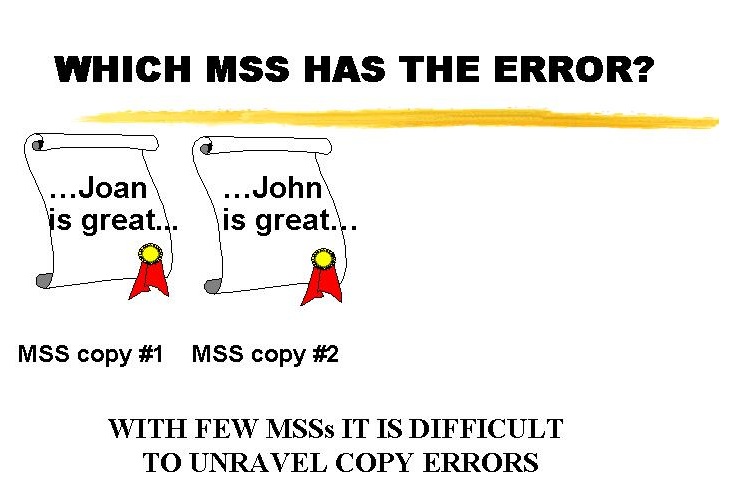 The original writing had either been writing about Joan OR about John, and the other of these manuscripts contains a copy error. The question is -Which one has the error? From the available evidence it is very difficult to determine.

Now suppose we found two more manuscript copies of the same work, as shown below: 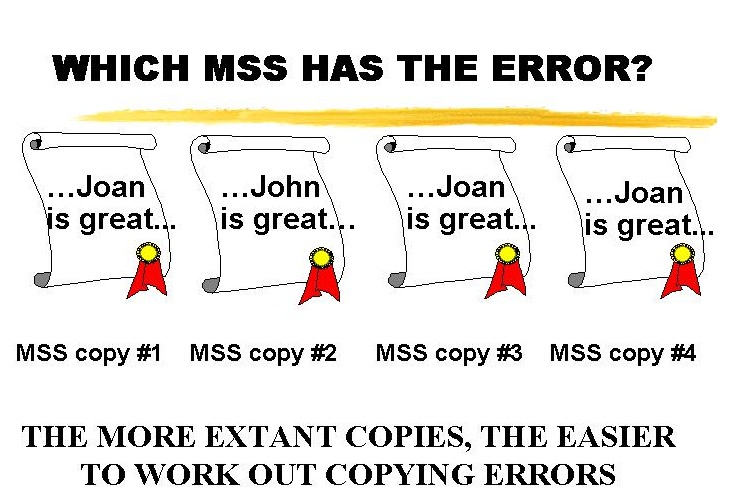 Now it is easier to deduce which manuscript has the error. It is more likely that the error is made once, rather than the same error repeated three times, so it is likely that MSS #2 has the copy error, and the author was writing about Joan, not John.

This simple example illustrates a second principle we can use to test manuscript textual reliability: the more existing manuscripts that are available, the easier it is to detect & correct errors and to determine the words of the original.

Textual Criticism of Great Books of the West

We have two indicators to determine the textual reliability of the Bible:

Since these indicators apply to any ancient writing we can proceed to apply them to both the Bible as well as other ancient writings, as done in the tables below.

These writers represent the major classical writers of Western history – the writings that have shaped the development of Western civilization. On average, they have been passed down to us by 10-100 manuscripts that are preserved starting only about 1000 years after the original was written.

Textual Criticism of Great Books of the East

Let us now look at ancient Sanskrit epics that provide much of the understanding of philosophy and history in South Asia. Prominent among these works is the Mahabharata, which contains, among other things, the Bhagavad Gita and the account of the Kurukshetra War. Scholars assess that the Mahabharata developed into its current written form around 900 BC, but the oldest manuscript portions that still exist are dated at around 400 BC, giving an interval of about 500 years from original composition and earliest existing manuscripts (wiki reference link).  Osmania University in Hyderabad boasts that it has two manuscript copies in its library collection, but these two date from only 1700 AD and 1850 AD – thousands of years after original composition (reference link). Not only are the manuscript copies rather late, but given that the Mahabharata was a popular work that conformed to changes in language and style, there is a very high degree of textual variance between the existing manuscript copies. Scholars who assess textual variance write of the Mahabharata state:

The other great epic, the Ramayana, is considered to have been composed around 400 BC but the earliest existing copy, from Nepal, is dated at the 11 century AD (reference link) – giving an interval from original composition to earliest existing manuscripts of about 1500 years. There are several thousand existing copies of the Ramayana. These have extensive textual variations between them, especially between those of North India and those of South India/South East Asia. Scholars have grouped the manuscripts into 300 different families based on textual variations.

Textual Criticism of the New Testament

Let us now examine the manuscript data for the Bible. The table below lists the oldest existing copies of the New Testament. Each of them has been given a name (usually from the name of the discoverer of the manuscript)

The number of New Testament manuscripts is so vast that it would be impossible to list them all in a table. As one scholar who spent years studying this issue states:

“We have more than 24000 MSS copies of portions of the New Testament in existence today… No other document of antiquity even begins to approach such numbers and attestation. In comparison, the ILIAD by Homer is second with 643 MSS that still survive”   (McDowell, J. Evidence That Demands a Verdict. 1979. p. 40)

A leading scholar at the British Museum corroborates this:

“Scholars are satisfied that they possess substantially the true text of the principal Greek and Roman writers … yet our knowledge of their writings depends on a mere handful of MSS whereas the MSS of the N.T. are counted by … thousands”  (Kenyon, F.G. -former director of British Museum- Our Bible and the Ancient Manuscripts. 1941 p.23)

And a significant number of these manuscripts are extremely ancient. I own a book about the earliest New Testament documents. The Introduction starts with:

This is significant since these manuscripts come from the early period when the followers of the gospel were not in power in a government, but were instead subject to intense persecution by the Roman Empire. This is the period when the gospel came to South India, to Kerala, and here too the community of gospel followers were never in a position of power through which a king could manipulate the manuscripts. The figure below illustrates the timeline of manuscripts from which the New Testament of the Bible is based.

Timeline showing that from the existing 24000 manuscript copies of the New Testament, the very earliest ones are used in modern translations (e.g. in English, Nepali or Hindi) of the Bible. These come from before the time of Constantine (325 AD) who was the first Christian Emperor of Rome

Thus the text is 99.5% common across these many manuscripts.

Textual Criticism of the Old Testament

‘These [DSSs] confirm the accuracy of the Masoretic Text … Except for a few instances where spelling and grammar differ between the Dead Sea Scrolls and the Masoretic Text, the two are amazingly similar’  (M.R. Norton, Manuscripts of the Old Testament in The Origin of the Bible, 1992)

When we compare this with, for example, the textual variation in the Ramayana, the permanence of the text of the Old Testament is simply remarkable.

Timeline showing how the Old Testament manuscripts of the Bible have not changed from the Masoretic to the Dead Sea Scrolls even though these are separated by about 1000 years.

Conclusion: The Bible is Textually Reliable

So what can we conclude from this data? Certainly at least in what we can objectively measure (number of extant MSSs, the time spans between original and earliest existing MSS, and the degree of textual variation between the manuscripts) the Bible is verified to a much higher degree than any other ancient work. The verdict to which the evidence pushes us is best summed up by the following quote:

“To be skeptical of the resultant text of the New Testament is to allow all of classical antiquity to slip into obscurity, for no other documents of the ancient period are as well attested bibliographically as the New Testament”  (Montgomery, History and Christianity. 1971. p.29)

What he is saying is that to be consistent, if we decide to doubt the textual reliability of the  Bible we may as well discard all that we know about history in general – and this no informed historian has ever done. We know that the Biblical texts have not been altered as eras, languages and empires have come and gone since the earliest extant MSSs pre-date these events.  The Bible is a reliable book.