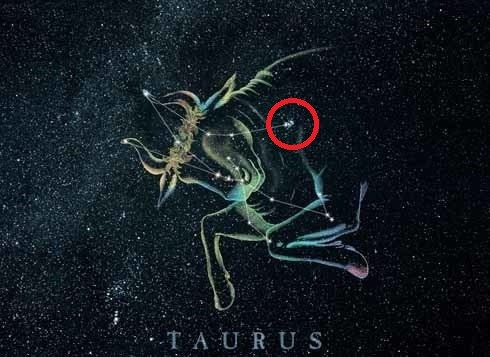 Taurus, or Vrish, forms an image of a fierce, charging bull with powerful horns. In today’s horoscope interpretation of the astrological zodiac, you follow the horoscope’s advice for Taurus to find love, good luck, wealth, health, and insight on your personality through your kundli.

But where did the Bull come from?

And what did it mean to the first astrologers?

In the ancient Zodiac, Taurus was the ninth of twelve astrology constellations that together formed a Great Story. We explored the ancient Jyotish, and then saw that Virgo to Sagittarius formed an astrological unit describing the Great Redeemer and his mortal conflict with His Enemy. Capricorn to Aries formed another unit focusing on the work of this Redeemer for us. Taurus opens the third and final unit focusing on the Return of the Redeemer and his complete Victory.  Since this unit opens with a Bull and closes with a Lion (Leo) it concerns power and authority.

In the ancient Zodiac, Taurus was for all people since it predicts events affecting everyone.  So even if you are not a Taurus in the modern horoscope sense, the ancient story embedded in the astrology of Taurus is worth understanding.

Taurus (or Vrish) is a constellation of stars forming a bull with prominent horns.  Observe the stars of Taurus.  Can you see anything resembling a bull with horns in this image?

Here is the National Geographic image of Taurus along with the other astrological images of the Zodiac. Does the Bull come in any clearer?

See the stars forming Taurus connected with lines. Can you make out the bull with horns any better? It looks more like a cosmic letter K.

But this sign goes back as far as we know in human history.  Here is the zodiac in the Dendera Temple of Egypt, more than 2000 years old, with the image of the Bull Taurus circled in red.

But why?  What did it mean to the ancients?

Original Meaning of Taurus the Bull

The image of Taurus shows the Bull with prominent horns, head lowered, charging. The Bull shows intense rage – ready to gore anyone in its path, dashing forward with swift and boundless energy.

Circled in red is the star group known as the Pleiades (or Seven Sisters) in the middle of the neck of Taurus. The earliest direct reference to the Pleiades comes from the Book of Job in the Bible. Job lived around the time of Abraham, about 4000 years ago. There we read:

He is the Maker of the Bear and Orion, the Pleiades and the constellations of the south.

So the Creator made the constellations, including the Pleiades (and so also Taurus). The horns of Taurus and the Psalms are the keys to understand. The Christ had to come from the line of David (The title ‘Anointed one’ = ‘Christ’). Among the images describing the coming Christ was that of ‘horn’.

“Here I will make a horn grow for David and set up a lamp for my anointed one.

You have exalted my horn like that of a wild ox; fine oils have been poured on me.

The ‘horn’ represented power and authority. The Anointed One (Christ) was the horn of David. In his First Coming he did not wield his horn because he came as a Servant. But consider what his Second Coming will be like.

The Coming of the Bull

Come near, you nations, and listen; pay attention, you peoples! Let the earth hear, and all that is in it, the world, and all that comes out of it! 2 The Lord is angry with all nations; his wrath is on all their armies. He will totally destroy them, he will give them over to slaughter. 3 Their slain will be thrown out, their dead bodies will stink; the mountains will be soaked with their blood. 4 All the stars in the sky will be dissolved and the heavens rolled up like a scroll; all the starry host will fall like withered leaves from the vine, like shriveled figs from the fig tree. 5 My sword has drunk its fill in the heavens; see, it descends in judgment on Edom, the people I have totally destroyed. 6 The sword of the Lord is bathed in blood, it is covered with fat— the blood of lambs and goats, fat from the kidneys of rams. For the Lord has a sacrifice in Bozrah and a great slaughter in the land of Edom. 7 And the wild oxen will fall with them, the bull calves and the great bulls. Their land will be drenched with blood, and the dust will be soaked with fat. 8 For the Lord has a day of vengeance, a year of retribution, to uphold Zion’s cause.

The dissolving of the stars is exactly what Jesus said would be the Sign of his return. The prophet Isaiah (700 BC) here is predicting the same event. It describes the hour of the Christ’s coming to judge the world in righteousness – the hour of a coming Judgment. It is pictured in the heavens with Taurus, and it is written in the Book. He is coming as Judge.

The Prophetic writings mark the Taurus ‘horo’ like this.

Then I saw another angel flying in midair, and he had the eternal gospel to proclaim to those who live on the earth—to every nation, tribe, language and people. 7 He said in a loud voice, “Fear God and give him glory, because the hour of his judgment has come. Worship him who made the heavens, the earth, the sea and the springs of water.”

The prophetic reading says that this hour will come and it is the hour that marks Taurus in the ancient astrological horoscope.

You and I can apply the Taurus horoscope reading today.

Taurus tells you that the end will come with such a big bang that all the lights in the sky will go out.  There won’t even be any planets around to align with any star. So best to make good use of your time while the lights are still on. A good place to start is working on your humility trait because God opposes the proud but gives grace to the humble. In other words, there is no compatibility between Him and pride in you. And by the sounds of it, you will be looking for much mercy in that Hour. A characteristic He will test for in that Hour is whether you love him or not. How do you know if you love him? According to him, if you guard his commands then you love him. At the very least, guarding his commands means knowing them and doing them.

Loving one another is another trait that He values highly. Of course His idea of what love is may be different than yours so you will want to know what He says true love is. His idea of love will carry you far in any relationship, whether at work, at home or in romance. He talked less about how love makes you feel, and more about what love makes you do and not do. He said that love is patient and kind and does not envy, does not boast, and is not proud. Practicing to put these characteristics into your life will go along way to prepare you for the Taurus hour. As a final thought, it may open things up to learn what ‘the eternal gospel’ is which the angel was to proclaim to all nations.

Further through the Zodiac and deeper into Taurus

In Taurus judgment is pictured.  Gemini will picture what happens to those passing this Judgment. Learn the basis of the Ancient Jyotisha Astrology here. Read its beginning with Virgo.

But to go deeper into Taurus see