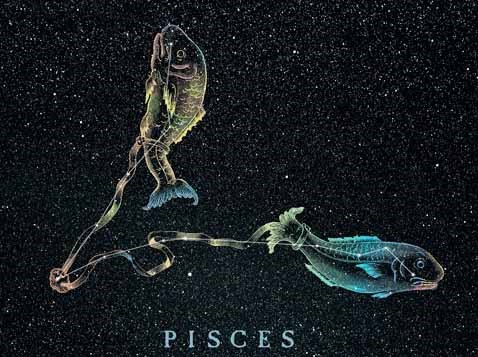 Pisces, or Meen, is the seventh chapter of the Ancient Zodiac Story, part of the Zodiac Unit revealing the results for us of the Coming One’s victory.  Pisces forms the image of two fishes bound together by a long band. In today’s reading of the ancient zodiac, you follow the horoscope for Pisces to find love, good luck, wealth, health, and insight on your personality from your kundli.

But what did it mean to the ancients?

Where did the image of two fishes connected by a long band come from?

We explored the ancient Jyotish, and having examined the ancient Kundali’s from Virgo to Aquarius, we continue with Pisces.  In this ancient astrology of the stars each chapter was for all people. So even if you are ‘not’ a Pisces in the modern horoscope sense, the ancient story in the stars of Pisces is worth knowing.

Constellation Pisces in the Stars

Here are the stars forming Pisces or Meen.  Can you see anything resembling two fishes held together by a long band in this photo?

Even connecting the stars in ‘Pisces’ with lines do not make the fishes obvious.  How did early astrologers think up two fishes from these stars?

But this sign goes back as far as we know in human history.  Here is the zodiac in the Dendera Temple of Egypt, more than 2000 years old, with the two Pisces fishes circled in red. You can also see in the sketch on the right how the band binds them together.

Below is a traditional image of Pisces that astrology has used as far back as we know.

What is the meaning of the two fishes?

And the band fastened to their two tails?

What is the significance for you & me?

Capricorn showed that the fish tail received life from the dying head of the goat. Aquarius showed water poured out to the Fish – Piscis Austrinus. The fish represented the multitudes who would receive the Living Water. Sri Abraham foresaw this when God promised him

all peoples on earth will be blessed through you.

and through your seed all nations on earth will be blessed, because you have obeyed me

The multitudes redeemed through the Coming One separate into two groups

he says: “It is too small a thing for you to be my servant to restore the tribes of Jacob and bring back those of Israel I have kept. I will also make you a light for the Gentiles, that my salvation may reach to the ends of the earth.”

Isaiah wrote of the ‘tribes of Jacob’ (ie Jews) as well as the ‘Gentiles’. These are the two fishes of Pisces. When Jesus called his disciples he told them

“Come, follow me,” Jesus said, “and I will send you out to fish for people.”

The very first followers of Jesus used the symbol of the fish to show they belonged to him. Here are photos from ancient catacombs.

The two fishes of Pisces, the tribes of Jacob and those of other nations following Jesus have equal life given to them by him. The Band also holds the two fishes equally tight.

In Pisces the constellation The Band, binds together both fishes. The Band holds the two fishes captive. But we see the hoof of Aries the Ram coming towards the band. It speaks of the day when the fishes will be freed by Aries.

This is the experience of all followers of Jesus today. The Bible describes our present bondage to suffering, decay and death. But still in hope looks forward to the Day of freedom from this bondage (represented in Pisces by the band).

I consider that our present sufferings are not worth comparing with the glory that will be revealed in us. 19 For the creation waits in eager expectation for the children of God to be revealed. 20 For the creation was subjected to frustration, not by its own choice, but by the will of the one who subjected it, in hope 21 that the creation itself will be liberated from its bondage to decay and brought into the freedom and glory of the children of God.22 We know that the whole creation has been groaning as in the pains of childbirth right up to the present time. 23 Not only so, but we ourselves, who have the firstfruits of the Spirit, groan inwardly as we wait eagerly for our adoption to sonship, the redemption of our bodies. 24 For in this hope we were saved. But hope that is seen is no hope at all. Who hopes for what they already have? 25 But if we hope for what we do not yet have, we wait for it patiently.

We wait for the redemption of our bodies from death. As it explains further

50 I declare to you, brothers and sisters, that flesh and blood cannot inherit the kingdom of God, nor does the perishable inherit the imperishable. 51 Listen, I tell you a mystery: We will not all sleep, but we will all be changed— 52 in a flash, in the twinkling of an eye, at the last trumpet. For the trumpet will sound, the dead will be raised imperishable, and we will be changed. 53 For the perishable must clothe itself with the imperishable, and the mortal with immortality. 54 When the perishable has been clothed with the imperishable, and the mortal with immortality, then the saying that is written will come true: “Death has been swallowed up in victory.”55 “Where, O death, is your victory? Where, O death, is your sting?”56 The sting of death is sin, and the power of sin is the law. 57 But thanks be to God! He gives us the victory through our Lord Jesus Christ.

The Band around the fishes of Pisces pictures our present-day situation. But we wait expectantly for the coming of Aries to set us free. This freedom from bondage to death will come to all who are in Pisces. The Sign of Pisces declared that not only would the victory of Jesus grant us Living Water, but also that the Day of our release from our current bondage to decay, trouble and death is coming.

Since Horoscope comes from the Greek ‘Horo’ (hour) and the Prophetic writings mark important hours for us, we note the Pisces ‘horo’. The fishes alive in the water, but still bound by the bands mark the Pisces horo reading. True life but waiting for complete freedom.

They will put you out of the synagogue; in fact, the hour is coming when anyone who kills you will think they are offering a service to God. 3 They will do such things because they have not known the Father or me. 4 I have told you this, so that when their hour comes you will remember that I warned you about them. I did not tell you this from the beginning because I was with you,

“When you are brought before synagogues, rulers and authorities, do not worry about how you will defend yourselves or what you will say, 12 for the Holy Spirit will teach you at that hour what you should say

We live in the hour of Aquarius and also in the hour of Pisces.  Aquarius brought the water (Spirit of God) to bring life to the fishes.  But we are only in the middle of the Zodiac Story and the final Sagittarius victory is still in the future.  We now face trouble, hardship, persecution and physical death in this hour, as Jesus forewarned.  The bands holding the fish are real.  But we still taste Living Water even while temporarily held by the bands.  The Holy Spirit indwells, teaches and guides us – even in the face of death.  Welcome to the hour of Pisces.

You and I can apply the Pisces horoscope reading today with the following.

Pisces horoscope declares you must go through many hardships to enter the Kingdom. In fact some common traits of your journey to that Kingdom are troubles, hardships, distresses and even death.  Don’t let this get you down.  It is actually to your benefit as it can develop three characteristics in you: faith, hope and love.  The bands of Pisces can do this in you – if you do not lose heart. Though outwardly you may be wasting away, yet inwardly you are being renewed day by day.  This is because you have the firstfruits of the Spirit in you.  So even as you groan inwardly as you wait eagerly for the redemption of your body, recognize that these real problems are working for your good if they make you compatible with the King and His Kingdom.

Keep yourself going with this Truth: In his great mercy The King has given you new birth into a living hope through the resurrection of Jesus from the dead, and into an inheritance that can never perish, spoil or fade. This inheritance is kept in heaven for you, who through faith are shielded by God’s power until the coming of the salvation that is ready to be revealed in the last time. In all this you greatly rejoice, though now for a little while you may have to suffer grief in all kinds of trials. These have prove the genuineness of your faith—of greater worth than gold, which perishes even though refined by fire. They result in praise, glory and honor at The King’s Coming.

Further through the Zodiac Story and deeper into Pisces

How this deliverance unfolds we see in Aries. Learn the basis of the Ancient Jyotisha Astrology here. Read its beginning with Virgo.