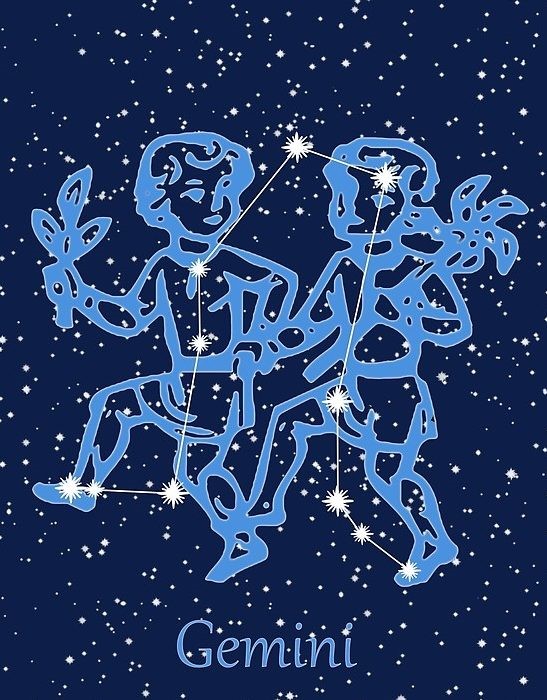 Gemini is Latin for twins and forms an image of two persons, usually (but not always) men who are twins. In the modern astrology horoscope reading of the ancient zodiac, you follow the horoscope advice for Gemini to find love, good luck, health, and gain insight on your personality.

But what did Gemini mean to the ancients?

We explored the ancient Jyotish and having examined the ancient Kundali’s from Virgo to Taurus, we continue with Gemini, or Mithun.

Gemini Constellation in the Stars

Observe this picture of the star constellation forming Gemini.  Can you see anything resembling twins in the stars?

If we connect the stars in Gemini with lines it is still hard to ‘see’ twins.  We can see two persons, but how did ‘twins’ arise?

Here is a photo of National Geographic poster of the zodiac showing Gemini as seen in the Northern Hemisphere.

Even connecting the stars forming Gemini with lines it is still hard to see twins. But Gemini goes back as far as we know in human history.

After three months we put out to sea in a ship that had wintered in the island—it was an Alexandrian ship with the figurehead of the twin gods Castor and Pollux.

Castor and Pollux are the traditional names of the two twins in Gemini.  This shows the idea of divine twins was common around 2000 years ago.

As with the previous zodiac constellations, the image of two twins is not directly obvious from the constellation itself. It is not innate within the star constellation. Rather, the idea of twins came first.  The first astrologers then overlaid this idea onto the stars as a sign.  The ancients could point out Gemini to their children and tell them the story associated with the Twins.  This was its original astrological purpose as we saw here.

But what did it originally mean?

Gemini in the Zodiac

The image below shows Gemini circled in red in the zodiac of the Dendera Temple in Egypt. You can also see the two persons in the side-sketch.

In the ancient Dendera zodiac, one of the two people is a woman.  Instead of two male twins this zodiac shows a man-woman couple as Gemini.

Here are some common astrology images of Gemini

Why has Gemini from ancient times always been a pair? But not always male twins?

Gemini in the Ancient Story

Gemini continues this story.  Even if you are not a Gemini in the modern horoscope sense, the ancient astrological story in the Gemini stars is worth knowing.

Medieval Arabic astrologers named the constellation stars as from ancient times. The star ‘Castor’ in Arabic is named Al-Ras al-Taum al-Muqadim or “The Head of the Foremost Twin”. Prominent in Castor is the star Tejat Posterior, meaning “the back foot”, referring to Castor’s foot. It is also sometimes known as Calx which means “the heel.” Another prominent star has the traditional name, Mebsuta, coming from the ancient Arabic Mabsūṭah, meaning “the outstretched paw.” In Arabic culture, Mabsūṭah represented the lion’s paws.

Pollux is known as “The Head of the Second Twin,” from the Arabic Al-Ras al-Tau’am al-Mu’akhar. The meaning is not so much of two born at the same time, but rather of two becoming completed or joined.  Moses’ Law uses the same word where it says of two boards in Ark of the Covenant

At these two corners they must be double from the bottom all the way to the top and fitted into a single ring; both shall be like that.

As the two boards are doubled in the box of the ark, so the two in Gemini are brought together, not by time of birth, but by a bonding. Since Castor is identified with ‘heel’ (Scorpio) and ‘paw of lion’ (Leo), both prophecies of Jesus Christ, then Castor is the astrological picture of Jesus at his return.

But who is joined to him?

The Gospel explains of Jesus Christ that

The Son is the image of the invisible God, the firstborn over all creation.

‘Firstborn’ implies that others will come later.

For those God foreknew he also predestined to be conformed to the image of his Son, that he might be the firstborn among many brothers.

This picture goes back to creation. When God created Adam & Eve He created them

When Adam disobeyed God it marred this likeness and destroyed our sonship. But when Jesus Christ came as the ‘firstborn son’ it restored the image.  So now through Jesus…

Yet to all who did receive him, to those who believed in his name, he gave the right to become children of God— children born not of natural descent, nor of human decision or a husband’s will, but born of God.

But when the set time had fully come, God sent his Son, born of a woman, born under the law, 5 to redeem those under the law, that we might receive adoption to sonship.

This was the Libra horoscope reading. God adopts us as His children through Jesus Christ, done through the gift of Jesus Christ, the firstborn.

Upon his return Jesus Christ will reign as King. The Bible closes with this vision of the role of the adopted younger brother.

There will be no more night. They will not need the light of a lamp or the light of the sun, for the Lord God will give them light. And they will reign for ever and ever.

This is almost the last sentence in the Bible, as it looks to the fulfillment of all things. There it sees the adopted brothers reigning with the Firstborn. Gemini pictured this to the ancients long ago as the Foremost and the Second brothers ruling in heaven.

The Bible also uses the wedding union of a man and woman to picture the relationship between Christ and those who belong to him. The details of Eve’s creation & marriage to Adam on Friday of Creation week purposefully foreshadowed this union with the Christ. The Gospel concludes with this wedding picture between the Lamb (Aries) and his Bride.

Let us rejoice and be glad and give him glory! For the wedding of the Lamb has come, and his bride has made herself ready.

Aquarius will marry and he is inviting us to be that Bride, pictured long ago with Gemini – the cosmic union of the Lamb and His Bride.

Horoscope comes from the Greek ‘Horo’ (hour) and means the marking (skopus) of sacred hours.  Jesus marked the Gemini hour (horo) in his story of the Wedding Banquet.

7 “Then all the virgins woke up and trimmed their lamps. 8 The foolish ones said to the wise, ‘Give us some of your oil; our lamps are going out.’ 9 “‘No,’ they replied, ‘there may not be enough for both us and you. Instead, go to those who sell oil and buy some for yourselves.’ 10 “But while they were on their way to buy the oil, the bridegroom arrived. The virgins who were ready went in with him to the wedding banquet. And the door was shut. 11 “Later the others also came. ‘Lord, Lord,’ they said, ‘open the door for us!’ 12 “But he replied, ‘Truly I tell you, I don’t know you.’ 13 “Therefore keep watch, because you do not know the day or the hour (horo).

At the hour (horo) of the banquet he sent his servant to tell those who had been invited, ‘Come, for everything is now ready.’

The Gemini horoscope has two hours. Jesus taught there is a definite but unknown hour when the Wedding occurs and many will miss it.  This is the point of the parable of the ten virgins.  Some were not ready for the appointed hour and so missed it. But the hour is still open and the invitations to the wedding banquet are still being sent to all.  This is the hour we live in now.  We simply need to come because He has done the work to prepare the banquet.

You and I can apply the Gemini horoscope today in the following way.

Gemini declares that the invitation to your most important relationship is still open. The stars say only this relationship you are invited into will eclipse all other pursuits – adoption into the cosmic royal family as well as the celestial marriage – one that will never perish, spoil or fade. But this bridegroom will not wait around for ever. Therefore with minds that are alert and fully sober, set your hope on the grace to be brought to you when this Bridegroom is revealed at his coming.

As an obedient child of your celestial Father, do not conform to the evil desires you had when you lived in ignorance of this destiny. Since you call on a Father who judges each person’s work impartially, live out your time as foreigners here in reverent fear. Rid yourself of all traits like malice and all deceit, hypocrisy, envy, and slander of every kind. Your beauty should not come from outward adornment, such as elaborate hairstyles and the wearing of gold jewelry or fine clothes. Rather, it should be that of your inner self, the unfading beauty of a gentle and quiet spirit, which is greatly admired by the coming Bridegroom.

Further through the Zodiac Story and deeper into Gemini

The Redeemer placed Gemini long ago in the stars to show that He would complete his redemption.  Gemini shows our coming adoption to a firstborn brother and our celestial wedding. But before that, Cancer‘s Sign must happen which we look at next.

But to read further about Gemini from the writings