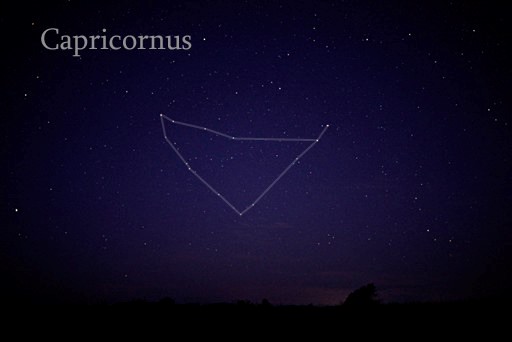 Capricorn, also known as Makar, is the fifth zodiac rasi. Vedic astrology today uses the Zodiac Rasi of Capricorn to build your Kundli as a guide to guide decisions towards success in relationships, health and wealth.

But was that its original use?

Capricorn, or Makar, forms an image of the front of a Goat joined to the tail of a Fish. Where did the Goat-Fish come from?

What did it mean from the beginning?

From Virgo to Sagittarius we saw that the first four constellations formed an astrological unit concerning the person of a Great Redeemer and his mortal conflict with His Enemy. We introduced the basis for this most ancient Zodiac Story here.

Capricorn introduces the second unit focusing on the work of this Redeemer as it affects us. In this unit we see the results – the blessings to us – of the Redeemer’s victory over His enemy.  This unit opens with a Goat and closes with a Ram (Aries) and the middle two Signs concern fishes (Aquarius & Pisces).  How fitting then that the front of a Goat joined to the tail of a Fish has always symbolized Capricorn.

In the ancient Zodiac, Capricorn was for all people since it foretold benefits available to anyone.  So even if you are not a Capricorn in the modern horoscope sense, the ancient astrology story embedded in the stars of Capricorn is worth understanding.

The Capricorn Constellation in Astrology

Here are the stars forming Capricorn connected by lines.  Can you see anything resembling a goat-fish in this image?  How could anyone even imagine a fused goat-and-fish creature from these stars?

Goats and fishes are not even remotely related in nature.  But this sign goes back as far as we know in human history.  Here is the zodiac in the Dendera Temple of Egypt, more than 2000 years old with the image of the Goat-Fish Capricorn circled in red.

This means that the idea of a Goat-Fish came first, not by looking at the stars of Capricorn. Then the first astrologers superimposed this idea onto the stars to form the image of Capricorn as a recurring sign for a memory aid.  The ancients could point out the Goat-Fish to their children and tell them the story associated with the image.  This was the zodiac’s original astrological purpose as we saw here.

But what did it mean to the ancients?

The image of Capricorn shows the Goat bowing its head, with its right leg folded underneath the body, and he seems unable to rise with the left.  It looks like the Goat is dying.  But the tail of the Fish is supple, bent and full of vigour and life.

From the beginning of human history the goat (and sheep) was the accepted way to offer a sacrifice to God. The Bible tells us that Abel, son of Adam/Manu, offered sacrifices from his flocks. Abraham offered a Ram (male goat or sheep), making a mountain as sacred as Kailash.  Moses told the Israelites to offer a lamb for Passover, defying Death as powerful as Kali. These were signs to teach us that a ransom from another would be needed to redeem us from the balance of Libra. Jesus, in his sacrifice on the cross volunteered to be that sacrifice for us.

The ancients used the Capricorn goat bowed in death to remind them of the promised Redeemer coming to be the sacrifice.

But what does the Capricorn Fish tail mean? To illustrate we look at another ancient culture – the Chinese. The Chinese New Year celebration occurs January/February (around the time of Capricorn) and is a tradition that goes back thousands of years. This festival celebrates with decorations that Chinese hang on their doors. Here are some images of this.

You will notice that all show fishes. They use fishes in their New Year Greeting because, from ancient times, fishes symbolized life, abundance and plenty.

In the same way, in the ancient zodiac, fishes represented the abundance of living people – multitudes – who have accepted the sacrifice for themselves.

Jesus used the same image of fishes when he taught about the many whom his sacrifice would reach. He taught

Once again, the kingdom of heaven is like a net that was let down into the lake and caught all kinds of fish. 48 When it was full, the fishermen pulled it up on the shore. Then they sat down and collected the good fish in baskets, but threw the bad away.

When Jesus explained the future work of his disciples he said

As Jesus was walking beside the Sea of Galilee, he saw two brothers, Simon called Peter and his brother Andrew. They were casting a net into the lake, for they were fishermen. 19 “Come, follow me,” Jesus said, “and I will send you out to fish for people.”

Both times the image of fishes represented the multitudes of people who would receive the gift of Jesus’ bhakti offered to them. Why not you too?

Horoscope comes from the Greek ‘Horo’ (hour) and thus means the marking of special hours. The Prophetic writings mark the Capricorn or Makar ‘horo’ vividly. Because Capricorn is two-fold (Goat and fish), the Capricorn horo is also two-fold: the hour of sacrifice and the hour of multitudes.  Jesus marked the first of the horos with this.

14 When the hour came, Jesus and his apostles reclined at the table. 15 And he said to them, “I have eagerly desired to eat this Passover with you before I suffer. 16 For I tell you, I will not eat it again until it finds fulfillment in the kingdom of God.” … 20 In the same way, after the supper he took the cup, saying, “This cup is the new covenant in my blood, which is poured out for you.

This is the ‘hour’ of the Capricorn goat.  The Passover exodus over 1500 years previously, when the blood of the sacrifice painted on the doors so that death would pass over, had foreshadowed this hour.  That very hour Jesus revealed the full meaning of Passover by stating that his blood would similarly be poured out for them … and us.  He would die so we would get life, just like the Passover with Moses … just like the Capricorn goat.  That hour leads to the next hour – multitudes with life.

I looked, and there before me was a white cloud, and seated on the cloud was one like a son of man with a crown of gold on his head and a sharp sickle in his hand. 15 Then another angel came out of the temple and called in a loud voice to him who was sitting on the cloud, “Take your sickle and reap, because the hour to reap has come, for the harvest of the earth is ripe.” 16 So he who was seated on the cloud swung his sickle over the earth, and the earth was harvested.

The prophetic writing says that the hour will come when those joined to the Capricorn sacrifice will participate in the harvest to heaven at the end of this age.  This is the hour in Jesus’ parable of the fish in the net. These two horos of Goat and fish balance and fulfill each other.  These two hours marked Capricorn in the ancient astrological horoscope.

You and I can apply the Capricorn horoscope reading today as a Kundali like this.

Capricorn tells that there is more to life than meets the eye.  If you were running the universe perhaps all its characteristics would be straightforward and obvious.  But you need to accept the fact that neither you nor I are in charge.  Just as there are physical laws that govern the motion of planets, there are spiritual laws that govern you.  Better accept that reality rather than continue to fight or try to get around it.  Otherwise you will find that going against these laws is just as painful as going against physical laws. Certainly you do not want to be incompatible with the fundamental spiritual horos.

Perhaps a good place to start getting in sync with these spiritual laws is to just express thanks and gratitude instead of first trying to understand it all.  After all, if there is Someone who is looking out for you in such a way as to spill some of his own blood on your behalf – why not try saying ‘thanks’.  Being thankful is a trait that can smooth out a lot of questions in any relationship.  And you can give thanks straight from your heart, anytime and any day.  Perhaps then all the puzzling pieces may start coming together to make sense of your life.  Be bold, take a new direction, and say ‘thanks’ to Capricorn.

Further through the Zodiac and deeper into Capricorn