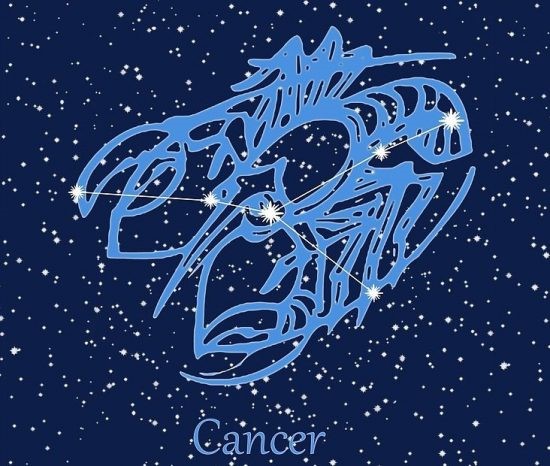 The crab forms the common image of Cancer, coming from the Latin word for crab. In today’s modern astrology horoscope reading of the ancient zodiac, you follow the horoscope advice for Cancer to find love, good luck, health, and get insight on your personality through your kundli.

But did the ancients read Cancer this way?

What did it mean originally?

We explored the ancient Jyotish, and having examined the ancient Kundali’s from Virgo to Gemini, we continue with Cancer, also called Karka.

Astrology of the Cancer Constellation

Observe this picture of the Cancer star constellation.  Can you see anything resembling a crab in the stars?

If we connect the stars in Cancer with lines it is still hard to ‘see’ a crab. It looks like an upside-down Y.

Here is a photo of National Geographic poster of the zodiac, showing Cancer in the Northern Hemisphere.

How did people first come up with a crab from this? But Cancer goes back as far as we know in human history.

LIke the other zodiac constellations, the image of Cancer is not obvious from within the constellation itself. Rather, the idea of a crab came first.  The first astrologers then overlaid the image through astrology onto the stars.  The ancients could point out the crab constellation to their children and tell them the story associated with it.

Why? What did it mean to the ancients?

Cancer in the Zodiac

Here are some common astrology images of Cancer

Here is the zodiac in the Dendera Temple of Egypt, more than 2000 years old, with the image of Cancer circled in red.

Though the sketch labels the image ‘crab’ it actually looks like a beetle. Ancient Egyptian records of about 4000 years ago described Cancer as a Scarabaeus (Scarab) beetle, their sacred symbol of immortality.

Cancer in the Ancient Story

We saw that the Bible states that the Creator God made the constellations to reveal His Story. From Virgo on the Zodiac signs have been showing us this Story.

Cancer furthers the Story.  Even if you are not a Cancer in the modern horoscope sense, the astrological story of Cancer is worth knowing.

KHEPERA was an old primeval god, and the type of matter which contains within itself the germ of life which is about to spring into a new existence; thus he represented the dead body from which the spiritual body was about to rise. He is depicted in the form of a man having a beetle for a head and this insect became his emblem because it was supposed to be self-begotten and self-produced.

The scarab beetle goes through several life stages before it finally transforms into the adult beetle. After hatching from eggs, the scarabs become worm-like larvae called grubs. As grubs they spend their existence living in the ground, feeding on decomposing matter such as dung, fungi, roots or rotten meat.

After crawling as a grub, it then cocoons itself into a chrysalis. In this state all activity ceases. Food is no longer taken in and all the senses are closed. All functions of life shut down and the scarab hibernates inside the cocoon. Here the grub undergoes metamorphosis, with its body dissolving and then re-assembling. At the appointed time the adult scarab emerges from the cocoon. Its adult beetle form does not resemble the worm-like body that could only crawl in the ground. Now the beetle bursts forth, flies and soars at will in the air and sunshine.

The ancient Egyptians venerated the scarab beetle because it signified the resurrection promised to the first humans.

Cancer declares that our lives follow a similar pattern. Now we live on the earth, slaves of toil and suffering, full of darkness and doubt – mere knots of incapacities and troubles like the earth-born and dirt-fed grubs, though bearing in us the seed and possibility of eventual glory.

Then our earthly life terminates in death and passes into the mummy-like condition in which our inner person sleeps in death, with our body waiting for the resurrection call to burst out of the graves. This was the ancient meaning and symbol of Cancer – the resurrection of the body triggered when the Redeemer Calls.

As the scarab bursts from its hibernation so will the dead awake.

Multitudes who sleep in the dust of the earth will awake: some to everlasting life, others to shame and everlasting contempt. 3 Those who are wise will shine like the brightness of the heavens, and those who lead many to righteousness, like the stars for ever and ever.

This will happen when the Christ calls for us to follow in the path of his resurrection.

But Christ has indeed been raised from the dead, the firstfruits of those who have fallen asleep. 21 For since death came through a man, the resurrection of the dead comes also through a man. 22 For as in Adam all die, so in Christ all will be made alive. 23 But each in turn: Christ, the firstfruits; then, when he comes, those who belong to him. 24 Then the end will come, when he hands over the kingdom to God the Father after he has destroyed all dominion, authority and power. 25 For he must reign until he has put all his enemies under his feet.

But our citizenship is in heaven. And we eagerly await a Savior from there, the Lord Jesus Christ, 21 who, by the power that enables him to bring everything under his control, will transform our lowly bodies so that they will be like his glorious body.

But someone will ask, “How are the dead raised? With what kind of body will they come?” 36 How foolish! What you sow does not come to life unless it dies. 37 When you sow, you do not plant the body that will be, but just a seed, perhaps of wheat or of something else. 38 But God gives it a body as he has determined, and to each kind of seed he gives its own body. 39 Not all flesh is the same: People have one kind of flesh, animals have another, birds another and fish another. 40 There are also heavenly bodies and there are earthly bodies; but the splendor of the heavenly bodies is one kind, and the splendor of the earthly bodies is another. 41 The sun has one kind of splendor, the moon another and the stars another; and star differs from star in splendor.42 So will it be with the resurrection of the dead. The body that is sown is perishable, it is raised imperishable; 43 it is sown in dishonor, it is raised in glory; it is sown in weakness, it is raised in power; 44 it is sown a natural body, it is raised a spiritual body.If there is a natural body, there is also a spiritual body. 45 So it is written: “The first man Adam became a living being”; the last Adam, a life-giving spirit. 46 The spiritual did not come first, but the natural, and after that the spiritual. 47 The first man was of the dust of the earth; the second man is of heaven. 48 As was the earthly man, so are those who are of the earth; and as is the heavenly man, so also are those who are of heaven. 49 And just as we have borne the image of the earthly man, so shall we bear the image of the heavenly man.

At the Return of the King

It is at His return when this will happen.

Brothers and sisters, we do not want you to be uninformed about those who sleep in death, so that you do not grieve like the rest of mankind, who have no hope. 14 For we believe that Jesus died and rose again, and so we believe that God will bring with Jesus those who have fallen asleep in him.

15 According to the Lord’s word, we tell you that we who are still alive, who are left until the coming of the Lord, will certainly not precede those who have fallen asleep. 16 For the Lord himself will come down from heaven, with a loud command, with the voice of the archangel and with the trumpet call of God, and the dead in Christ will rise first. 17 After that, we who are still alive and are left will be caught up together with them in the clouds to meet the Lord in the air. And so we will be with the Lord forever. 18 Therefore encourage one another with these words.

Horoscope comes from the Greek ‘Horo’ (hour) and means the marking (skopus) of special hours or times.  Jesus marked the The Cancer Hour (horo) in the following way

“Very truly I tell you, whoever hears my word and believes him who sent me has eternal life and will not be judged but has crossed over from death to life. 25 Very truly I tell you, an hour (horo) is coming and has now come when the dead will hear the voice of the Son of God and those who hear will live. 26 For as the Father has life in himself, so he has granted the Son also to have life in himself.

There is coming a specific hour when the One who spoke the world into existence will speak again. Those who hear will rise from the dead. Cancer was the symbol of this coming hour of resurrection read by the ancients from the stars.

You can apply the Cancer horoscope today in the following way.

Cancer tells you to continually look forward to the horo of your resurrection. Do not let those who say say there is no such resurrection coming fool you. You will be fooled if you live only for eating and drinking and a good time in the here and now. If you gain the whole world and pack it full of lovers, pleasures and excitement and you lose your soul what will you gain?

Therefore stand firm. Let nothing move you. Fix your eyes not on the seen, but on the unseen. The seen is temporary, but what is unseen is eternal. In the unseen grows a great crowd of the asleep waiting along with you for the Voice to Call them. Throw off everything that hinders you from visualizing the unseen and throw off the sin that so easily entangles. Then run with perseverance the race marked out for you, fixing your eyes on The Living Lamb, the pioneer and perfecter of faith. For the joy set before him he endured the cross, scorning its shame, and sat down at the right hand of the throne of God. Consider him who endured such opposition from sinners, so that you will not grow weary and lose heart.

Further through the Zodiac Story and deeper into Cancer

The Redeemer placed Cancer long ago in the stars to signify that the He would complete His redemption through the resurrection. The Zodiac Story concludes with Leo.