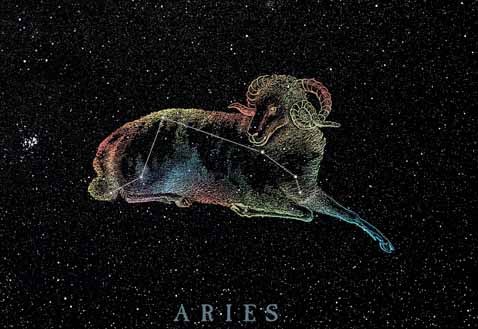 Aries, or Mesha, is the eighth chapter of the Ancient Zodiac Story and concludes the Unit declaring the results for us from the Coming One’s victory.  Aries forms the image of a ram alive and well with its head held high. In today’s modern astrology reading of the ancient zodiac, you follow the horoscope advice for Aries to find love, good luck, wealth, health, and gain insight on your personality through your kundli.

But what did Aries mean at first?

We explored the ancient Jyotish, and having examined the ancient Kundali’s from Virgo to Pisces, we continue with Aries.  In this ancient astrology of the stars each chapter was for all people. So even if you are ‘not’ an Aries in the modern horoscope sense, the ancient story in the stars of Aries is worth knowing.

Constellation Aries in the Stars

Observe the stars forming Aries.  Can you see anything resembling a ram (male sheep) with its head held high in this photo?

Even connecting the stars in Aries with lines does not make the ram obvious. So how did early astrologers think up a living Ram from these stars?

But this sign goes back as far as we know in human history.  See the zodiac in the ancient Dendera Temple of Egypt, with Aries circled in red.

Below are traditional images of Aries that astrology has used as far back as we know.

As with the previous constellations, the image of a living Ram was not observed first from the stars themselves.  Rather, the idea of a Ram came first. The first astrologers then overlaid the image through astrology onto the stars as a sign.

What was the meaning of the Ram?

What is the significance for you & me?

With Capricorn the Goat-front had died so Fish-tail could live. But the Band of Pisces still held the fishes. There still remains a bondage to physical decay and death. We live through many troubles, grow old and die! Yet we have a great hope for a physical resurrection. Aries, whose front leg extends to the band of Pisces, reveals how. An amazing thing happened to that Goat (Capricorn) which died. The Bible describes it like this:

6 Then I saw a Lamb, looking as if it had been slain, standing at the center of the throne, encircled by the four living creatures and the elders. The Lamb had seven horns and seven eyes, which are the seven spirits of God sent out into all the earth. 7 He went and took the scroll from the right hand of him who sat on the throne. 8 And when he had taken it, the four living creatures and the twenty-four elders fell down before the Lamb. Each one had a harp and they were holding golden bowls full of incense, which are the prayers of God’s people. 9 And they sang a new song, saying: “You are worthy to take the scroll and to open its seals, because you were slain, and with your blood you purchased for God persons from every tribe and language and people and nation. 10 You have made them to be a kingdom and priests to serve our God, and they will reign on the earth.” 11 Then I looked and heard the voice of many angels, numbering thousands upon thousands, and ten thousand times ten thousand. They encircled the throne and the living creatures and the elders. 12 In a loud voice they were saying: “Worthy is the Lamb, who was slain, to receive power and wealth and wisdom and strength and honor and glory and praise!” 13 Then I heard every creature in heaven and on earth and under the earth and on the sea, and all that is in them, saying: “To him who sits on the throne and to the Lamb be praise and honor and glory and power, for ever and ever!” 14 The four living creatures said, “Amen,” and the elders fell down and worshiped.

The marvelous news, planned from the beginning of human history, is that the Lamb, though slain, has come alive again.  Who was the slain lamb?  John the Baptist, thinking back to the sacrifice of Abraham, said of Jesus

The next day John saw Jesus coming toward him and said, “Look, the Lamb of God, who takes away the sin of the world!

Jesus rose from the dead three days after his crucifixion.  Forty days later, after being with his disciples, the Bible says he ascended into heaven.  The Lamb is alive and in heaven – just as Aries reveals.

9 After this I looked, and there before me was a great multitude that no one could count, from every nation, tribe, people and language, standing before the throne and before the Lamb. They were wearing white robes and were holding palm branches in their hands. 10 And they cried out in a loud voice:“Salvation belongs to our God, who sits on the throne, and to the Lamb.”

‘Horoscope’ comes from the Greek word ‘Horo’ (hour) and the Bible marks many auspicious hours. We have been reading the crucial Virgo to Pisces ‘horos’ in the writings. But the other Greek word in Horoscope – skopus (σκοπός) – brings out the Aries reading.  Skopus means to look at, think about or consider.  Aries marks the Zodiac Sign of the eternal Lamb of God. So Aries has no definitive time period to focus on, but we consider the Ram himself.

Do nothing out of selfish ambition or vain conceit. Rather, in humility value others above yourselves, 4 not looking (Skopus) to your own interests but each of you to the interests of the others.5 In your relationships with one another, have the same mindset as Christ Jesus:6 Who, being in very nature God, did not consider equality with God something to be used to his own advantage; 7 rather, he made himself nothing by taking the very nature of a servant, being made in human likeness. 8 And being found in appearance as a man, he humbled himself by becoming obedient to death— even death on a cross!9 Therefore God exalted him to the highest place and gave him the name that is above every name, 10 that at the name of Jesus every knee should bow, in heaven and on earth and under the earth, 11 and every tongue acknowledge that Jesus Christ is Lord, to the glory of God the Father.

There is no horo de-limiting Aries the Ram.  But the Ram has gone through distinct degrees of glory.  We first see him in the very nature (or form) of God.  He planned even from the beginning to be a servant by becoming a human and to die.  Virgo first announced this descent to ‘human likeness’. And Capricorn expressed his obedience to death.  But death was not the end. Since death could not hold him, now the Ram is exalted in heaven, alive and in charge.  It is from this high authority and power that the Ram executes the final unit of the Zodiac, beginning with Taurus.  No longer the servant, He is preparing to come in Judgment to vanquish his enemy, as Sagittarius of the ancient Zodiac story predicts.

You and I can apply the Aries horoscope reading in this way:

Aries declares that the brightness of morning comes after the dark night.  Life has a way of bringing the dark night to you.  You might be tempted to give up, quit or settle for something less than what you were made for.  To find the resilience to keep on going you need to look past your circumstances and situation.  You need to see your ultimate destiny.  You do so by scoping out Aries.  If you belong to Aries you will ride on his coattails and he is at the highest place and he will take you there with him.  For if, while you were God’s enemy, your relationship with him was restored through Capricorn, how much more, now being compatible with Him, will you be saved through Aries’ life?  It is just that you have to follow his path, and his path went down before it went up. So yours will have to as well.

How to keep going? Rejoice in Aries’ life always. I will say it again: Rejoice! Let your gentleness be evident in all your relationships. Aries is near. Do not be anxious about anything, but in every situation, by prayer and petition, with thanksgiving, bring your requests to God. And the peace of God, which goes beyond your understanding, will guard your hearts and your minds in The Ram.  Finally, whatever is true, whatever is noble, whatever is right, whatever is pure, whatever is lovely, whatever is admirable—if anything is excellent or praiseworthy—think about such things.

The Return of the Lamb

So Aries closes the second unit of the ancient zodiac story which focused on the benefits given to those who receive the fruits of the victory of Jesus (The Lamb).  Why not receive his gift of life?

The final unit, chapters 9-12 of the Ancient Zodiac Story, focuses on what happens when Aries the Ram returns – as he promised.  This is declared in that same vision of the Lamb when John saw:

They called to the mountains and the rocks, “Fall on us and hide us from the face of him who sits on the throne and from the wrath of the Lamb!

Further through the Zodiac Story and deeper into Aries

In the ancient zodiac this begins in Taurus.  Learn the basis of the Ancient Jyotisha Astrology here. Read its beginning with Virgo.

But for the written words going deeper into Aries see: