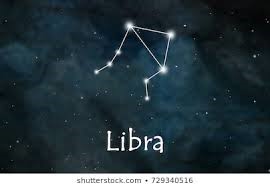 Libra, also known as Tula, is the second zodiac rasi and means ‘weighing scales’.  Vedic astrology today uses the Zodiac Rasi of Libra to build your Kundli as a guide to guide decisions towards success in relationships, health and wealth.

But was that its original use?

Libra (Tula) is a constellation of stars forming scales or balances.  Here is a picture of the Libra stars.  Can you see ‘weighing scales’ in this photo of the stars?

Even when we connect the stars of ‘Libra’ with lines, ‘scales’ are not the only possible interpretation.  But this sign of weighing scales goes back as far as we know in human history.

Here is a picture of the zodiac in the Dendera Temple of Egypt, more than 2000 years old, with the scales of Libra circled in red.

Here the National Geographic zodiac poster below shows Libra as seen in the Southern Hemisphere.  The triangle does not look like a scale at all.

The Author of the Zodiac Rasi

We saw that one of the oldest books ever written was Job and he affirmed that the Zodiac signs were made by God:

He is the Maker of the Bear and Orion, the Pleiades and the constellations of the south.

The first century historian Josephus had stated that the direct children of the first Manu, whom the Bible calls Adam, had created the Zodiac, forming a Story.  They first took the idea of Weighing Scales and placed that idea into the existing image patterns of the stars. We saw how Virgo opened the Story and now it continues with Libra (Tula)

Libra Kundali in the Ancient Zodiac

Libra is this Story’s second chapter and paints another sign in the night sky for us.  In it we see the Sign of Justice.  These Celestial Scales of Libra illustrate for us righteousness, justice, order, government and the institutions of the rule of God’s Kingdom.  Libra brings us face to face with eternal justice, the karma of our sin and the price of redemption.

Unfortunately, the verdict is not favourable for us.  The upper arm of the celestial balance contains the brightest star – showing that the balance of our good deeds are light and insufficient.   The Psalms pronounced the same verdict.

Lowborn men are but a breath, The highborn are but a lie; If weighed on a balance they are nothing; Together they are only a breath.

So the astrological Sign of Libra reminds us that our balance of deeds is insufficient. In the justice of the Kingdom of God, all of us are found to have a balance of good deeds that weigh only as much as a breath – deficient and insufficient.

But it is not hopeless.  As in matters of debt payments and obligations, there is a price which can cover our lack of merit.  But it is not an easy price to pay.  As the Psalms declares:

the ransom for a life is costly, no payment is ever enough

The Libra Kundali shows us how we can know this redeemer who can pay our obligations.

Since Horoscope comes from the Greek ‘Horo’ (hour) and the Prophetic writings mark important hours for us, we can note the Libra ‘hour’. The Libra horo reading is:

But when the set time had fully come, God sent his Son, born of a woman, born under the law, 5 to redeem those under the law, that we might receive adoption to sonship.

In stating ‘the set time had fully come’ the Gospel marks a special ‘horo’ for us.  This hour is not based on the hour of our birth but on an hour set at the beginning of time. In stating that Jesus was ‘born of a woman’ it alludes to the kundali of Virgo and her Seed.

How did he come?

He came ‘under the law’.  So he came under the weighing scales of Libra.

Why did he come?

He came to ‘redeem’ us who were ‘under the law’ – the scales of Libra.  So that he can redeem those of us who find our scale of deeds too light.  This is followed with the promise of ‘adoption to sonship’.

You and I can apply the Libra horoscope reading today with the following.

Libra reminds us that your pursuit of wealth can easily become greed, your pursuit of relationships can quickly cause you to treat others as disposable, and are likely to trample on people as you seek happiness. Libra tells us that such traits are not compatible with the scales of righteousness. Take stock now of what you are doing in life. Be careful because Libra warns us that God will bring every deed into judgment, including every hidden thing.

If your balance of deeds is too light on that Day you will need a Redeemer.  Explore all your options now but remember that the Seed of Virgo came so that He can redeem you.  Use your God-given characteristic to sense the right and wrong in your life. What ‘adoption’ means in the Libra horoscope reading may not be clear at this point but if you continue to daily ask, knock and seek He will guide you. This can be done any time of any day, throughout your week.

Libra’s picture has changed since the beginning of human history.  In early astrological images and names given to the stars of Libra we see the claws of Scorpio reaching to grasp Libra.  For example, the brightest star Zubeneschamali, comes from the Arabic phrase al-zuban al-šamāliyya, which means “the northern claw”.  The second brightest star in Libra, Zubenelgenubi, is derived from the Arabic phrase al-zuban al-janūbiyy, meaning “the southern claw.” The two claws of Scorpio are grasping at Libra.  This reveals a great struggle that is underway between two opponents.

Further through the Zodiac Story and deeper into Libra

How this struggle unfolds we see in Scorpio. Learn the basis of the Ancient Jyotisha Astrology here. Begin the Story with Virgo.

But to go deeper into the written story of Libra: