The first time I experienced Diwali ‘up close’ was when I was working in India. I had come to stay for a month and at 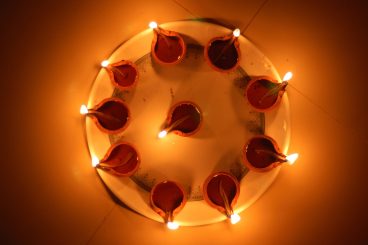 The first time I experienced Diwali ‘up close’ was when I was working in India. I had come to stay for a month and at the beginning of my stay Diwali was celebrated all around me. What I remember most were all the firecrackers – the air was thick with smoke and it made my eyes sting slightly. So with all that excitement going on around me I wanted to learn about Diwali, what it was and what it meant. And I fell in love with it.

The ‘festival of lights’ inspired me because I am a believer in, and follower of, Yeshu Satsang also known as the Lord Jesus. And the main message of his teaching was that His Light would overcome the darkness within us. So Diwali is a lot like the Lord Jesus.

Most of us realize that we have a problem with darkness in us. This is why so many millions participate in the Kumbh Mela festival – because millions of us know that we have sins and that we need to wash them off and cleanse ourselves. As well, the ancient prayer of the well-known Prartha Snana (or Pratasana) mantram acknowledges this sin or darkness inside us.

But all of these thoughts of darkness, or sin, inside us is not encouraging. In fact we sometimes think of it as ‘bad news’. This is why the thought of light overcoming the darkness gives us so much hope and celebration. And so, along with the candles, the sweets and the firecrackers, Diwali expresses this hope that light will overcome the darkness.

Lord Jesus – Light in the World

This is exactly what the Lord Jesus has done. The Gospel in the Veda Pusthakan (or Bible) describes Jesus in the following way:

So you see, this ‘Word’ is the fulfillment of the hope that Diwali expresses. And this hope comes in this ‘Word’ from God, which John later identifies as the Lord Jesus. The Gospel continues by stating that

The true light that gives light to everyone was coming into the world. He was in the world, and though the world was made through him, the world did not recognize him. He came to that which was his own, but his own did not receive him.  Yet to all who did receive him, to those who believed in his name, he gave the right to become children of God—  children born not of natural descent, nor of human decision or a husband’s will, but born of God. (John 1:9-13)

This is explaining how the Lord Jesus came to ‘give light to everyone’. Some think that this is only for Christians, but notice that it says that this offer is for ‘everyone’ in the ‘world’ to ‘become children of God’. This offer is one that everyone, at least everyone who is interested in, like Diwali, Light overcoming the darkness inside them.

What is extraordinary about the Lord Jesus is that his incarnation was predicted and foretold in many different ways and instances from early human history and they are recorded in the Hebrew Vedas. So he was written about even before he was on this earth. And some of the predictions of his incarnation are also remembered in the most ancient hymns in the Rg Veda, which praises the coming of Purusa, and records some of the earliest events of mankind, such as the flood of Manu, the same person whom the Bible – Veda Pusthakan – calls ‘Noah’. These ancient accounts depict the darkness of the sins of people, while offering the hope of the coming Purusa, or the Lord Jesus.

The people walking in darkness have seen a great light; on those living in the land of the shadow of death a light has dawned (Isaiah 9:2)

Why would this be the case? He continues

For to us a child is born, to us a son is given, and the government will be on his shoulders. He will be called Wonderful Counsellor, Mighty God, Everlasting Father, Prince of Peace. (Isaiah 9:6)

But though he was the Incarnation, he would become a Servant to us, to help us with our darkest needs.

Surely he took up our infirmities and carried our sorrows, yet we considered him stricken by God, smitten by Him and afflicted. But he was pierced for our transgressions, he was crushed for our iniquities; the punishment that brought us peace was upon him, and by his wounds we are healed. We all like sheep have gone astray, each of us has turned to his own way; and the LORD has laid on him the iniquity of us all (Isaiah 53:4-6)

Isaiah is describing the crucifixion of the Lord Jesus. He does so 750 years before it happened, and he also describes the crucifixion as the sacrifice that heals us. And this work that the Servant would offer would be such that God would say to him

I will also make you a light to the Gentiles (non-Jews) that you may bring my salvation to the ends of the earth (Isaiah 49:6-7)

So you see! This is for me and it is for you. It is for everyone.

The example of Paul

In fact, one man who definitely did not think that the Lord Jesus’ sacrifice was for him was Paul, a man who opposed the name of Jesus. But he had an encounter with the Lord Jesus that caused him later on to write

For God, who said, “Let light shine out of darkness,” made his light shine in our hearts to give us the light of the knowledge of God’s glory displayed in the face of Christ. (2 Co 4: 6)

Paul had a personal encounter with the Lord Jesus which caused light to ‘shine in his heart’.

Experiencing this Light of Jesus for you

So what must we do to get this ‘salvation’ from darkness and sin becoming light that Isaiah had prophesied, the Lord Jesus has obtained, and which Paul experienced? Paul answers this question in another letter where he writes

For the wages of sin is death, but the gift of God is eternal life in Christ Jesus our Lord (Romans 6:23)

Notice how he says this is a ‘gift’. A gift, by definition, cannot be earned. Someone simply gives you a gift without you earning it or you meriting it. But the gift will never benefit you, never be in your possession unless you ‘receive’ it. This is why John, who I quoted at the beginning wrote

Yet to all who did receive him, to those who believed in his name, he gave the right to become children of God (John 1:12)

So you simply receive him. You can do so by asking him for this gift which is freely given. The reason you can ask is that he is alive. Yes, he was sacrificed for our sins, but three days later came back to life, just as the Rsi Isaiah had prophesied hundreds of years earlier when he wrote about the suffering servant that

After the suffering of his soul, he will see the light of life and be satisfied. By his knowledge my righteous Servant will justify many (Isaiah 53:11)

So the Lord Jesus is alive and can hear you when you call out to him. You can pray the Prartha Snana (or Pratasana) mantram to Him and He will hear and save because he sacrificed himself for you and now has all authority. Here again is that prayer that you can cry to him:

You are welcome to browse other articles here. They start at the beginning of human history and show from the Sanskrit and the Hebrew Vedas this plan of God to save us from darkness and bring us into light, simply as a gift. And I will continue to add more articles as I have time.  You are also welcome to contact me if you have some questions.

This Diwali, as you light candles and exchange gifts, may you experience this gift of inner light from the Lord Jesus like Paul had experienced and had been changed by many years ago and which is also offered to you. Happy Diwali