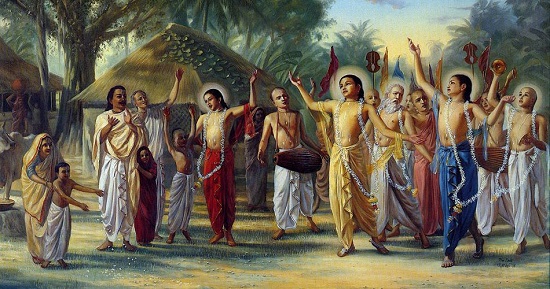 Bhakti (भक्ति) comes from Sanskrit meaning “attachment, participation, fondness for, homage, love, devotion, worship”. It refers to an unbending devotion and love for a God by a devotee. Thus, bhakti requires a relationship between the devotee and the deity.  One practicing bhakti is called a bhakta.  Bhaktas often direct their bhakti to Vishnu (Vaishnavism), Shiva (Shaivism), or Devi (Shaktism).  However some choose other deities for bhakti (ex. Krishna).

Practicing bhakti requires love and devotion engaging both emotion and intellect.  Bhakti is not a ritualistic devotion to a God, but participation in a path that includes behavior, ethics and spirituality. It involves, among other things, refining one’s state of mind, knowing God, participating in God, and internalizing God. The spiritual path that the bhakta takes is called bhakti marga.  Much poetry and many songs expressing Bhakti devotion to God have been writing and sung over the years.

Though bhaktas have written many bhakti songs and poems to various Gods, vanishingly few Gods composed bhakti songs and poems to humans.  Even the mythologies that model bhakti never begin with Divine bhakti for a human mortal.  The attitude of Hanuman towards lord Rama is considered to be dasya bhava; that of of Arjuna and the shepherd boys of Vrindavan towards Krishna is regarded as sakhya bhava; that of Radha towards Krishna is regarded as madhura bhava; and that of Yashoda, looking after Krishna during his childhood, is regarded as vatsalya bhava.

Yet none of these examples begin with the Divine initiating bhakti to a human.  The bhakti of God to man is so rare we never think to ask why.  If we give bhakti to a God who can respond back to our devotion, then this God need not wait for us to initiate bhakti, the God could initiate Himself.

It is in looking at Bhakti in this way, from God to man, rather than from man to God that we can to understand how to practice bhakti ourselves.

The Hebrew Vedas contain poems and songs composed from God to man, rather than from man to God.  This collection, called Psalms, are Hebrew Gitas.  Though written by people, their authors claimed that God inspired their compositions, and thus are His.  But how can we know if this is true?  We can know this because they foresaw or predicted real human history and we can check the predictions.

Take Psalm 22 for example.  The Hebrew King David wrote it ca. 1000 BCE (he also foresaw the coming ‘Christ’).  It praises someone whose hands and feet are ‘pierced’ in torture, then ‘laid in the dust of death’ but afterwards achieved a great victory for all ‘families of earth’.  The question is who?

The answer to this helps us understand bhakti better.

You can read the entire Psalm 22 here. The table below, with color-matching to highlight similarities, shows Psalm 22 side-by-side with the description of Jesus’ crucifixion recorded in the Gospels.

Eye-witnesses of Jesus’ crucifixion wrote the gospels.  But David composed Psalm 22 from the perspective of the person experiencing it – 1000 years beforehand.  How can we explain the similarity between these writings? Is it coincidence that the details match so precisely to include that the soldiers both divided (they divided seamed clothes along the seams) AND cast lots for the clothes (splitting the seamless garment would ruin it so they gambled for it).  David composed Psalm 22 before the Romans invented crucifixion, yet it describes crucifixion details (piercing hands and feet, bones out of joint – from stretching as the victim hangs).

Additionally, John’s Gospel records that blood and water flowed out when they thrust a spear in Jesus’ side, indicating fluid build-up around the heart.  Jesus thus died of a heart attack, matching the Psalm 22 description ‘my heart has turned to wax’. The Hebrew word translated ‘pierced’ literally means ‘like a lion’. In other words, the soldiers mutilated his hands and feet as a lion mauls its victim when they ‘pierced’ him.

Skeptics reply that the similarity of Psalm 22 with the Gospels is because Jesus’ disciples made up the events to ‘fit’ the song.  Could that explain it?

Psalm 22 does not end with verse 18 in the table above. It continues on. Note here how triumphant it is at the end – after the death!

The poor will eat and be satisfied;
those who seek the Lord will praise him—
may your hearts live forever!

27 All the ends of the earth
will remember and turn to the Lord,
and all the families of the nations
will bow down before him,
28 for dominion belongs to the Lord
and he rules over the nations.

29 All the rich of the earth will feast and worship;
all who go down to the dust will kneel before him—
those who cannot keep themselves alive.
30 Posterity will serve him;
future generations will be told about the Lord.
31 They will proclaim his righteousness,
declaring to a people yet unborn:
He has done it!

Forethought to you and me living today

This is no longer describing details of this person’s death, dealt with in the beginning of the Psalm. David now foresees further into the future, past Jesus’ resurrection, to address its impact on ‘posterity’ and ‘future generations’ (v.30). This is us living 2000 years after Jesus.  David sings that ‘posterity’ following this man of ‘pierced hands and feet’, having died such a horrible death, ‘will be told’ about him and ‘serve’ him.  Verse 27 foretells the extent; to the ‘ends of the earth’, among ‘all families of nations’, causing them to ‘turn to the LORD’. Verse 29 indicates how ‘those who cannot keep themselves alive’ (which is all of us) will one day kneel before him. This man’s victory will be proclaimed to people who were not alive (the ‘yet unborn’) when he died.

This concluding finale has nothing to do with the Gospels because it is now foreseeing much later events – those of our time. The Gospel writers, in the 1st century, could not make up the impact of Jesus’ death into our time and so did not record that.  The skeptical view of the relationship between Psalm 22 and the Gospels does not explain the far future, world-wide impact of Jesus that Psalm 22 correctly predicted 3000 years ago.

One could not make a better prediction of the impact of Jesus’ crucifixion than Psalm 22 does.  Who else in world history can claim that details of his death as well as the legacy of his life into the distant future would be announced 1000 years before he lived?  Since no human can predict the far future with such precision, this is evidence that God inspired this composition of Psalm 22.

Bhakti from God to you in ‘all families of nations’

As noted, bhakti, encompasses not just emotion, but a complete participation of the bhakta towards the person of his devotion.  If God so carefully planned the sacrifice of His Son Jesus that He inspired details into song 1000 years beforehand, He acted not in emotional reaction, but with deep forethought, plan and intent.  God participated fully in this act, and He did it for you and me.

Because of his devotion to us, in Divine Bhakti, God sent Jesus, planned from the beginning of history in all manner of detail to give us eternal life.  He gives this life as a gift to us.

In reflecting on this the sage Paul wrote

For God so loved the world that he gave his one and only Son, that whoever believes in him shall not perish but have eternal life.

So how does God want us to response to his love, his Bhakti?  The Bible says

We love because He first loved us.

God did this so that they would seek him and perhaps reach out for him and find him, though he is not far from any one of us.

God wants us to reach back to him, receive his gift and respond to Him in love.  To learn to love Him back, beginning a bhakti relationship.  Since He made the first move to establish bhakti, one that cost Him greatly, involving much forethought, is it not reasonable for you and me to respond as His bhakta?