Kali is usually known as the goddess of death, but more accurately comes from the Sanskrit root word kal meaning time.  Icons of Kali are fearsome as she is usually portrayed wearing a necklace of severed heads and a skirt of severed arms while holding up a blood-dripping, freshly cut head, with one foot on the prone body of her husband Shiva.  Kali helps us understand another story of death in the Hebrew Veda – The Bible. 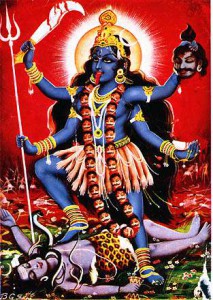 Kali adorned with severed heads and limbs upon the prone Shiva

Kali mythology recounts that the demon-king Mahishasura threatened war against the gods.  So together the gods created Kali from their essences. Kali savagely ripped through the ranks of the demon-army destroying all who were in her path in a great bloodbath.  The climax of the war was her battle with the demon-king Mahishasura whom she destroyed in a bloody contest.  Kali decimated her opponents into bloody body-parts, but she became intoxicated with all the blood so that she continued her path of death and destruction.  The gods were not sure how to stop her until Shiva volunteered to lay motionless on the battlefield.  It was thus when Kali, adorned with heads and arms of her dead opponents, put one foot on the prone Shiva and looked at him that she came back to her senses and destruction came to an end.

The Passover account in the Hebrew Veda mirrors this story of Kali and Shiva.  In the Passover story there is an angel that, like Kali, brings about widespread death in opposing an evil king.  This angel of death, as Shiva took a helpless position to stop Kali, is blocked from any house where a helpless lamb has been sacrificed.  Sages tell us that the meaning of this story of Kali relates to the conquering of the Ego.  The Passover story also has a meaning by pointing to the coming of Jesus of Nazareth – Yeshu Satsang – and his humility in renouncing his ego and sacrificing himself on our behalf.  The Passover story is worth knowing

We saw how Rsi Abraham’s sacrifice of his son was a sign pointing to the sacrifice of Jesus.  After Abraham, his descendants through this son Isaac, called Israelites, had become a vast number of people but also slaves in Egypt.

So we now come to a very dramatic struggle taken up by the Israelite leader Moses which is recorded in the Hebrew Veda of Exodus in the Bible.  It is so named because it records how Moses led the Israelites out of Egyptian slavery 500 years years after Abraham, around 1500 BCE.  Moses had been commanded by The Creator God (Prajapati) to confront the Pharaoh (ruler) of Egypt and it resulted in a conflict between the two which had brought nine plagues or disasters on Egypt. But Pharaoh had not agreed to let the Israelites go free so God was going to bring about a 10th and final plague.  The complete account of the 10th Plague is here.

God decreed that for the 10th plague an Angel (Spirit) of Death would pass through all houses in Egypt.  Every firstborn son in each house across the entire land would die on a specific night except those who remained in houses where a lamb had been sacrificed and its blood painted on the doorposts of that house.  Pharaoh’s doom, if he did not obey and paint lamb’s blood on his door, would be that his son and heir to the throne would die. And every house in Egypt would lose the firstborn son – if they did not sacrifice a lamb and paint its blood on the doorposts.  Egypt faced a national disaster.

Now those who have heard this story assume that the blood on the doors was a sign for the Angel of Death.  But notice the curious detail taken from the account written 3500 years ago.

Though God was looking for the blood on the door, and when He saw it Death would pass over, the blood was not a Sign for God.  It says quite clearly, that the blood was a ‘sign for you’ – the people. It is also a Sign for all of us who read this account. But how is it a sign?  An important clue is that after this event happened the LORD commanded them to:

Celebrate this day as a lasting ordinance for generations to come. When you enter the land … observe this ceremony… It is the Passover sacrifice to the LORD’ (Exodus 12:27) 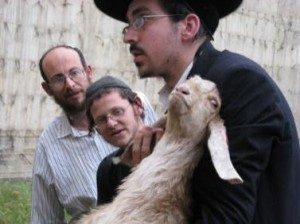 Jewish man with lamb at Passover

The Israelites were commanded to celebrate Passover on the same day every year. The Jewish calendar, being a lunar calendar, is a little different from the Western calendar, so the day in the year changes each year if you track it by the Western calendar. But to this day, still 3500 years later, Jewish people continue to celebrate Passover as a festival on the same date every year in memory of this event in obedience to that command given then.

And in tracking this festival through history we can note something quite extraordinary. You can notice this in the Gospel where it records the details of the arrest and trial of Jesus (1500 years after that First Passover plague):

“Then the Jews led Jesus … to the palace of the Roman governor [Pilate]… to avoid ceremonial uncleanness the Jews did not enter the palace; they wanted to be able to eat the Passover” … [Pilate] said [to Jewish leaders] “…But it is your custom for me to release to you one prisoner at the time of the Passover. Do you want me to release ‘the king of the Jews’?” They shouted back, “No not him…” (John 18:28, 39-40)

In other words, Jesus was arrested and sent for crucifixion right on the Passover day in the Jewish calendar. One of the titles given to Jesus was

The next day John (i.e. John the Baptist) saw Jesus coming toward him and said, “Look, the Lamb of God, who takes away the sin of the world. This is the one I meant when I said ‘A man who comes after me has surpassed me because he was before me’”. (John 1:29-30)

Here we see how the Passover drama is a Sign to us. Jesus, the ‘Lamb of God’, was crucified (i.e. sacrificed) on the very same day of the year that all the Jews were sacrificing a lamb in memory of the first Passover that had occurred 1500 years before.  This explains the annual timing of two holidays that re-occurs every year – a parallel that so few of us notice and even fewer ask ‘Why?’  The Jewish Passover Festival occurs almost every year at the same time as the Christian Easter festival does – check a calendar.  (Every 19th year there is a divergence of a month due to the cycle of lunar-based leap years in the Jewish calendar). This is why Easter moves every year because it is based on Passover, and Passover is timed by the Jewish calendar which calculates the year differently than the Western Calendar.

Now think for a minute about what ‘signs’ do. You can see some signs below here. 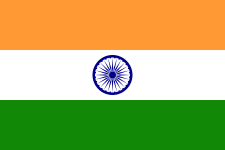 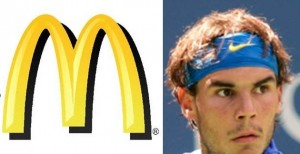 Commercial Signs to make us think of McDonalds and Nike

The flag is a sign or symbol of India.  We do not ‘see’ just a rectangle with an orange and a green band across it.  No, we think of India when we see the flag.  The sign of the ‘Golden Arches’ makes us think about McDonalds. The ‘√’ sign on Nadal’s headband is the sign for Nike. Nike wants us to think of them when we see this sign on Nadal. Signs are pointers in our minds to direct our thinking to the desired object.

The Passover account in the Hebrew Veda of Exodus explicitly said that the Sign was for the people, not for Creator God (though He would still look for the blood and pass over the house if he saw it).  As with all signs, what did He want us to think of when we look to Passover?  With the remarkable timing of lambs being sacrificed on the same day as Jesus, it must be a pointer to the sacrifice of Jesus.

It works in our minds like I have shown in the diagram below. The sign points us to the sacrifice of Jesus. 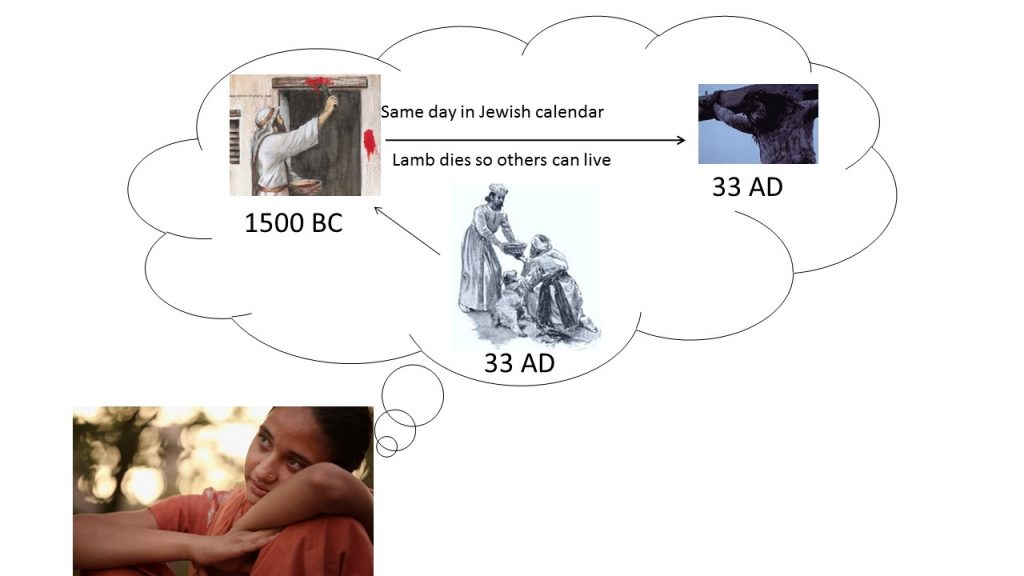 In that first Passover the lambs were sacrificed and the blood spread so the people could live.  And thus, this Sign pointing to Jesus is to tell us that he, ‘The Lamb of God’, was also given as a sacrifice to death and his blood spilt so we could receive life.

In the Sign of Abraham the place where Abraham was tested with the sacrifice of his son was Mount Moriah.  A lamb died so Abraham’s son could live. 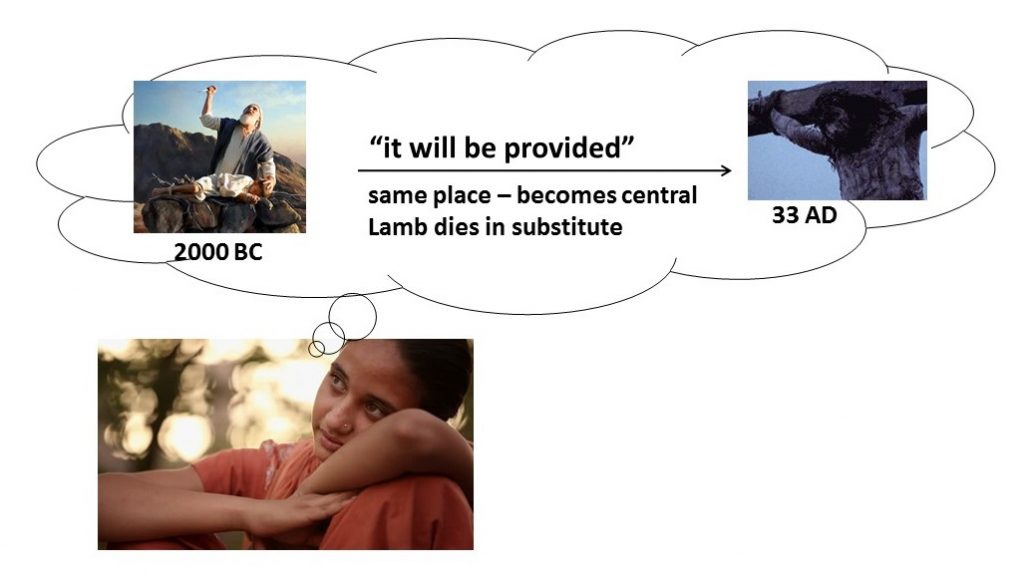 The Sign of Abraham was pointing to the location

Mount Moriah was the very same place where Jesus was sacrificed. That was a Sign to make us ‘see’ the meaning of his death by pointing to the place. In the Passover we find another pointer to Jesus’ sacrifice – by pointing to the same day in the year.  A lamb sacrifice is once again used – showing that it is not just a coincidence of an event – to point to the sacrifice of Jesus.  In two different ways (through location and through timing) two of the most important festivals in the sacred Hebrew Vedas directly point to the sacrifice of Jesus.  I cannot think of any other person in history whose death is so foreshadowed by such parallels in such dramatic fashion.  Can you?