The pilgrimage (Pada Yatra) leading to the Kataragama Festival goes beyond India.  This pilgrimage commemorates Lord Murugan’s (Lord Kataragama, Kartikeya or Skanda) pilgrimage when he left his parent’s (Shiva & Parvati) Himalayan home, journeying to Sri Lanka out of love for the local girl Valli.  Their love and marriage is remembered in the Kataragama Perahera Festival at the Kataragama Temple in Sri Lanka.

Devotees begin their pilgrimage sometimes 45 days before the festival to journey hundreds of kilometers to reach Kataragama.  In memory of Lord Murugan, God of War, many carry a vel (spear) while they leave the safe place they know and venture into the unknown through this pilgrimage.

Pilgrims complete their pilgrimage by trekking up Kataragama Mountain to begin the Kataragama festival at the new moon.  For 14 evenings a nightly perahera of Murugan’s murti to Valli’s Temple is celebrated.  On the last morning of the full moon the climax is reached in the Water-cutting ceremony where Murugan’s Murti is dipped in Menik Ganga River and its sacred water is poured on devotees.

Another highlight of this festival is the fire-walking ceremony where devotees walk through blazing hot coal fires, defying belief as they demonstrate their faith to overcome the elements.

Peoples of different languages, religions and ethnicities unite in this annual pilgrimage seeking guidance, blessing, healing and to test their faith.  In that regard they follow the pattern set 4000 years ago by Abraham.  He went on a pilgrimage lasting not just several months, but his entire life.  The impact of his pilgrimage affects your life and mine 4000 years later.  His pilgrimage also required him to demonstrate his faith in God, offer sacrifice on a sacred mountain that defied belief.  It gave rise to a nation impacting across South Asia, birthed through cutting through water of the seas and walking with fire. Understanding how his pilgrimage set in motion that which bestows blessing and guidance to us today can be our start for enlightenment.  Before we explore Abraham’s pilgrimage, we get some context from the Veda Pusthakan, which records his pilgrimage.

We saw that mankind had corrupted the worship of the Creator Prajapati into worshiping stars and planets. Because of this Prajapati scattered the descendants of the three sons of Manu/Noah by confusing their languages. This is why there are the many nations separated by language today. Echoes of mankind’s common past can be seen in the 7-day calendars used throughout the world today and in the different memories of that great flood.

Prajapati had promised at the beginning of history that through the sacrifice of a Perfect Man ‘sages would gain immortality’. This sacrifice would function like a puja to clean us on the inside instead of just on our outside. However, with the worship of the Creator being corrupted, the newly scattered nations forgot this early promise. It is only remembered today in a handful of sources including the ancient Rg Veda and the Veda Pusthakan – The Bible.

But Prajapati/God had a plan. This plan was not something that you and I would expect because it would seem (to us) far too small and insignificant. But this was the plan that He chose. This plan involved calling a man and his family around 2000 BC (ie 4000 years ago) and promising to bless him and his descendants if he chose to receive the blessing. Here is how the the Bible recounts it.

The Promise to Abraham

The LORD had said to Abram, “Go from your country, your people and your father’s household to the land I will show you.

4 So Abram went, as the LORD had told him; and Lot went with him. Abram was seventy-five years old when he set out from Harran. 5 He took his wife Sarai, his nephew Lot, all the possessions they had accumulated and the people they had acquired in Harran, and they set out for the land of Canaan, and they arrived there….

7 The LORD appeared to Abram and said, “To your offspring I will give this land.” So he built an altar there to the LORD, who had appeared to him. (Genesis 12:1-7)

Some today wonder if there is a personal God who cares enough to help us in our troubled lives to give us hope. In this account we can test this question because in it a personal promise is made to a specific person, parts of which we can verify. This account records that The LORD directly promised Abraham that ‘I will make your name great’. We live in the 21st century – 4000 years later – and the name of Abraham/Abram is one of the most globally recognized names in history. This promise has literally, historically, and verifiably come true.

The earliest existing copy of the Bible is from the Dead Sea Scrolls which date to 200-100 B.C. This means that this promise has, at the very latest, been in writing since at least that time. But even at 200 BC the person and name of Abraham was still not yet well-known – being familiar only to a small minority of Jews. So we know that the promises’s fulfillment has come about only after it was written down. This is not a case of a promise being ‘fulfilled’ by writing it down after it happened.

… by means of his great nation

What is equally astonishing is that Abraham really did nothing noteworthy in his life – the kind of thing that normally makes one’s name ‘great’. He did not write anything extraordinary (like Vyasa who wrote the Mahabharata), he did not build anything noteworthy (like Shah Jahan who built the Taj Mahal), he did not lead an army with impressive military skill (like Arjuna in the Bhagavad Gita), nor did he lead politically (like Mahatma Gandhi did). He did not even rule a kingdom like a raja. He did nothing really except camp and pray in the wilderness and then have a son.

If you were predicting in his day who would be most remembered thousands of years later, you would have bet on the kings, generals, warriors, or court poets living back then to be remembered in history. But their names are all forgotten – while the man who just barely managed to have a family in the wilderness is a household name around the world. His name is great only because the nation(s) that he fathered kept the record of his account – and then individuals and nations that came from him became great. This is exactly how it was promised long ago (“I will make you into a great nation … I will make your name great”). I can think of no one else in all history so well-known who is so only because of descendants coming from him rather than from great accomplishments in his own life.

…Through the Will of the Promise-Maker

And the people today who descended from Abraham – the Jews – were never really a nation which we typically associate with greatness. They did not build great architectural structures like the pyramids of the Egyptians – and certainly nothing like the Taj Mahal, they did not write philosophy like the Greeks, or administer over far-flung regions like the British did. All of these nations did so in the context of world-power empires that stretched their extensive borders through extraordinary military power – something the Jews never had. The Jewish people’s greatness is mostly due to the Law and Book (Veda Pusthakan or Bible) which they birthed; from some remarkable individuals that came from their nation; and that they have survived for these thousands of years as a distinct and somewhat different people group. Their greatness is not really due to anything they did, but rather what was done to and through them.

Now look to the Person that was going to make this promise happen. There, in black-and-white, it says repeatedly that “I will …”. The unique way their greatness has played out in history fits once again in a remarkable way to this declaration that it was going to be the Creator who would make this happen rather than some innate ability, conquest or power of this ‘nation’. The media attention paid around the world today to events in Israel, the modern Jewish nation, is a case in point. Do you regularly hear of news events in Hungary, Norway, Papua New Guinea, Bolivia, or the Central African Republic – all similarly sized countries around the world? But Israel, a tiny nation of 8 million, is constantly and regularly in the news.

There is nothing in history or human events that would cause the unfolding of this ancient promise exactly as it was declared to this ancient man who, because he trusted this promise chose a special path. Think how likely it was for this promise to have failed in some way. But instead it has unfolded, and is continuing to unfold, as it was declared those thousands of years ago. The case is strong indeed that it is solely on the power and authority of the Promise-Maker that it has been fulfilled.

The Pilgrimage that still shakes the World 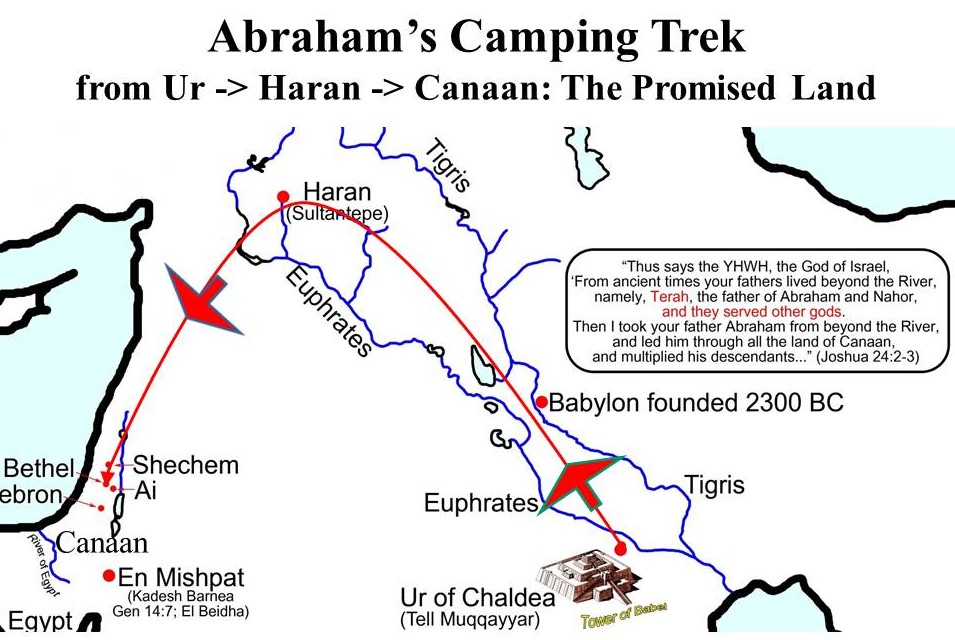 This map shows the route of Abraham’s pilgrimage

The Bible records that “So Abram left as the LORD had told him” (v. 4). He set out on a pilgrimage, shown on the map that is still making history.

But it does not end there since there is something else promised as well. The blessing was not only for Abraham because it also says that

“all peoples on earth will be blessed through you” (v. 4).

This should make you and I take note. Whether we are Aryan, Dravidian, Tamil, Nepali, or even something else; no matter what our caste is; no matter what our religion, be it Hindu, Muslim, Jain, Sikh or Christian; no matter whether we are wealthy or poor, healthy or sick; educated or not – the ‘all peoples on earth’ has to include all of us.  This promise for a blessing includes everybody alive from back then until today – which means you. How? When? What kind of blessing? This is not clearly stated just here but this is the birth of something that affects you and me.

We have just verified historically and literally that the first part of the Promise to Abraham has come true. Do we not then have a good reason to trust that the part of the Promise to you and to me will not also come true? Because it is universal and unchanging this Promise is Satya. But we need to unlock it – to understand Satya of this Promise. We need enlightenment so we understand how this Promise can ‘touch’ us. We find this enlightenment in continuing to follow the pilgrimage of Abraham. The key to moksha, which so many around the world are working so hard to obtain, is revealed for all of us as we continue to follow this remarkable man.